It is Sunday 22 December, and I decided to paint Emmanuel Niyoyabikoze. He is from Burundi! This is another portrait of the climate activist's series that I am painting for the book by the Grace Maddrell book team.

Emmanuel is planting trees. That is his mission. He created an NGO for planting trees in Burundi called Greening Burundi. Not only that, he sometimes he collect tree seeds, nurses the tree plants from the ground up and plants them, many times all by himself. I love this picture of him holding tree plants in his hands. On the picture, he had a shirt with white, black, and yellow stripes, and that's hard to paint. For the rest, the picture was fantastic. 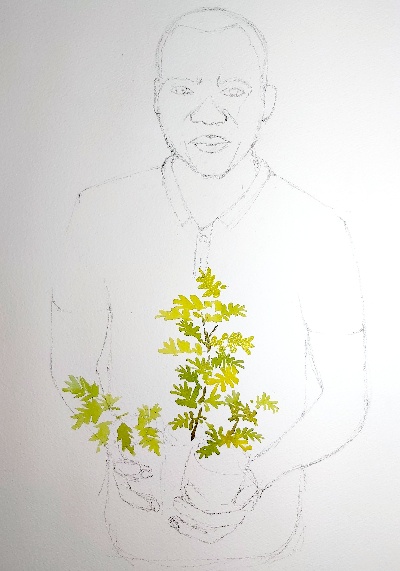 I printed the photo, and then I used my proportional divider to figure out where things would be.

My plan was to paint the leaves of the plant first and then use masking fluid on top of the greens and then paint the rest. Normally I avoid using masking film because the paint gathers around the film in a way I don't like. In this case, it did not matter so much with the masking film, and it was even possible that it would work out nicely.

This time I thought masking film would make the painting much easier to paint because I could paint delicate leaves with the color of Emmanuel's shirt in-between.

For the shirt, I was contemplating about what color it should be. I wanted a maximum effect and decided on a color on the opposite side of the color disc.

Do you know the color disc? The idea is that colors can be arranged in a circle. You can read more about it on Wikipedia: https://en.wikipedia.org/wiki/Color_wheel

According to the color discs theories, the yellowish greens are opposite to red-purple. So that would give that I get maximum color contrast if I made his shirt red-purple. 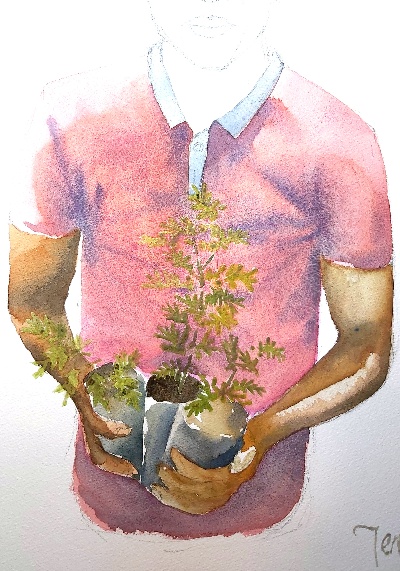 the next step, I painted Emmanuel's shirt. Here the leaves are covered with grey masking film, which makes the difference of the leaves and the shirt a little duller. 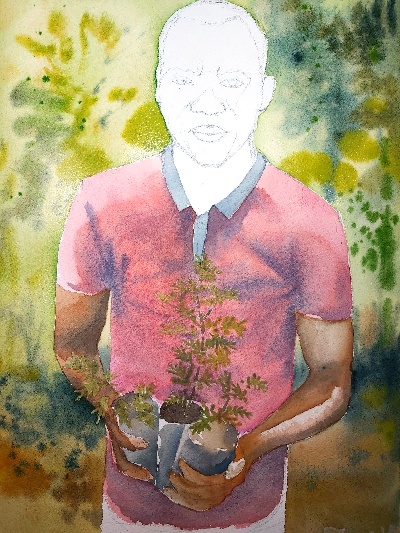 Then comes a really enjoyable part of this painting. That is the background. I love to make these backgrounds. Here is a photo that was taken before the background has dried up. The area that I cover with paint is completely wet. It is a bit tricky with the parts under his arms, but I make those wet with a smaller brush.

In the photo, there was a darker region on the ground around his elbows. I had to have that exaggerated a little because I needed some contrast between the leaves below his arm and the ground. There at that spot came a dark area. For the rest, I let myself be inspired by the photo, but I did not paint exactly like in the photo. If I had done that, there had been other people in the picture, and I had no time for that this evening.

There is a fair amount of splashing going on in this picture. I do that by holding a dry brush horizontally and then tap gently against the dry brush with a brush with paint or water. It gives a distinct ticking sound when you tap the two brushes against each other. I can splash color but also water onto the painting. The parts that are dry and accidentally given a droplet there I remove the droplet with a tissue. Splashing droplets into a wet paper, lets the paint of the droplets expand due to the surface tension of the water on the paper.

I wanted to show the lush landscape around Emmanuel. The photo had a lot of various sorts of greens in the background. On the ground, they were working on planting new trees, so there the background was more brown, which is logical. 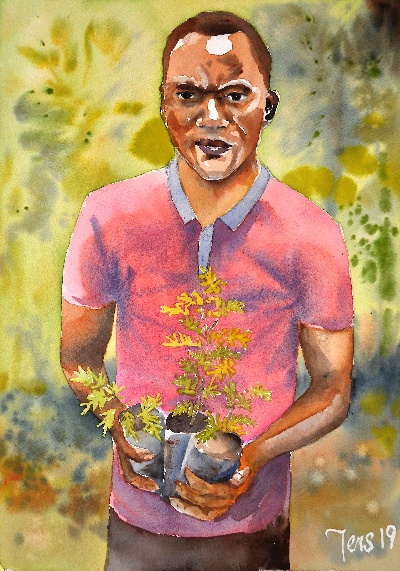 When the background was finished, it was time for the portrait of Emmanuel. I can admit I did not capture Emmanuel precisely correct. The likeness in my pictures varies a lot. I would like to become better at making images with more likeness, but that is an ever ongoing learning process.

Ever so slowly, over the years, I get a better execution of the likeness. I admit that the likeness is also a factor of how much effort I put into the painting. I got this feeling that an increased effort is not always making the painting better. In aquarelle painting, there are just so many layers you can paint before it becomes muddy and soggy. With other paint sorts, you can increase the effort without losing the quality of the painting, to some extent.

I sincerely hope that Emmanuel will succeed in his effort. I looked at the possibility of transferring a little donation but he only had direct bank transfer to a bank in Kenya and that would not be a good option for me. I hope he can arrange a paypal account but perhaps that is too difficult, I don't know.