Showing who I am is resistance 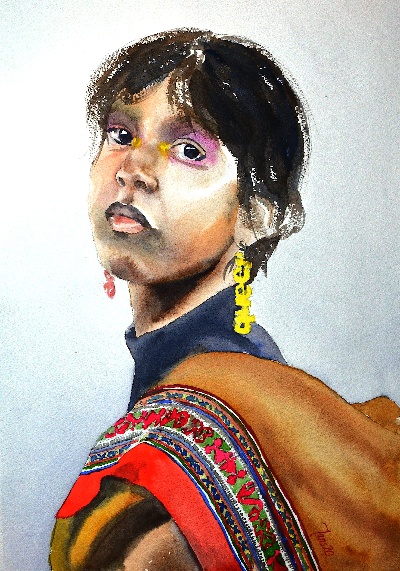 In Swedish, we have a new word, “Hen.” It is between him and her. I thought this was a Swedish thing. Recently I found a construction for this in English as well. English is not my native language, so I have to be careful with how I am using words. The terminology is like a plural description of a person. As if the group represents her or him. I understood that is how it works. This painting is of them. It is Nia.

Nia is from Buenos Aires in Argentina, and they are LGBTIQ, feminist, and climate activist. And they are aquarellist too! They write, “Showing who I am is resistance.”

I don’t know Spanish at all, but I tried to see what Nia is writing. The power and energy of this person are translating very well.

Since they were born in Buenos Aires, their mom has shown Nia the Andean culture and experiences from the territory. They grew up appreciating nature and Andean values and the preservation of it, and the appreciation of all living things. This appreciation transitioned from a young age into veganism.

Life in the city taught Nia to hate their original language, culture, and territory. They had to use Spanish and English.

When they understood structural racism, they saw their roots differently. All their life people mistreated them for having indigenous skin, body, and features. The indigenous roots were a reason for people to condemn them, but they began to resist. Nia justifies who they are every day. They are the fusion of the indigenous roots AND the city with values of both places.

Nia is queer, wearing holographic rings, jeans, and also their colorful Aguayo. The oppressors wanted Nia to erase their culture, impose theirs, and they grabbed it and reassigned it. They made it their own. Nia displays the indigenous as resistance. They use the imposed language to resist them and mix it with Quechua that they wanted to erase.

Showing who I am, that is resistance, writes Nia.

Calling them indigenous is resistance.

It is their identity. No one can force Nia to erase it.

Many carry the territory in their bodies and their faces. Some do not know where they come from nor their community. Others cannot visit the territory. Others have had relatives removed from their family records, and they have been imposed a foreign dress, a foreign language, a foreign culture.

Everything to erase us.

But they could not erase our faces that reflect the traits of our ancestors.

The colonizers carry out racial hatred every day. They are stigmatized. How to revindicate themselves is a personal decision.

Nia wrote their text to point out that it is crucial to carry on with this revindication. I translated Nia’s text because I want to show Nia as they are. To show my support.