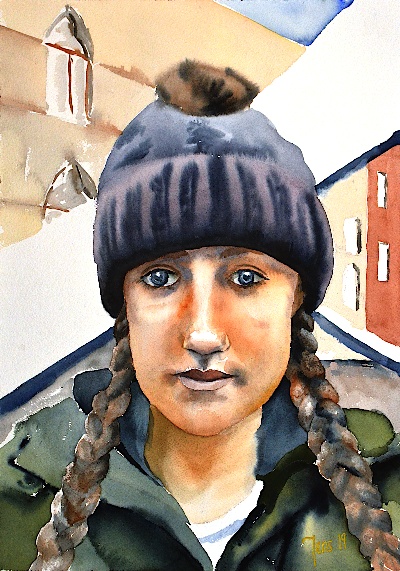 It was Sunday 29 December when I decided to paint Anna Kernahan. This did not come as a surprise, I will tell you why. Anna is a 17 years old climate activist from Belfast in Nothern Ireland. She is striking on Fridays at the statue "Spirit of Belfast" at the Cornmarket.

On Friday 27 of December, Anna had been striking for 17 weeks. Most of the time, she is alone. Take a few moments and think about the situation for a person being 17 years old, committing to strike for the climate every Friday, alone, if that is what it takes. She is not only doing that, but she is also keeping up with school, and writing letters to politicians about the climate crisis.

Are you still taking a few moments to think about how it is for a young girl to commit to solving problems of a future climate while you are not?

I have done that. I am impressed. You should be too. If you live in Belfast, you should also show your support to Anna and go to the Cornmarket and stay with Anna for a while. You can talk to her, for example, about the climate. Chances are that she knows a lot about the climate and the situation we are in.

On December 28, Anna tweeted about her strike the day before. Only this time Greta Thunberg retweeted it. Greta got 3.8 million followers right now. When Greta tweets something, it is national news or at least Irish news. On Monday 30 December, the Daily Mirror published an interview with Anna. In it, you could see that she wish that more people came a joined her at the Spirit of Belfast.

As you can imagine, my Twitter timeline was dominated by Annas's portrait for two days. This was the moment when I decided to paint her portrait as part of my series of portraits of climate activists.

In the original photo, Anna was a little tired and I suppose she smiled a tiny little bit more than the way I captured her. As often, I am concerned about likeness, which I should stop doing. In the original, her eyes were in the shadow of her hat. I painted her eyes much more prominent.

She got lovely thick braids on this photo and it was much work to paint those. I missed the shape of her hat. For the rest, I had a really great time painting Anna. For a couple of paintings, I had the feeling that I rushed the painting slightly. For Anna, I had decided to take a slower pace. It had to take a longer time to paint her. Especially those braids.

Climate activists until now, perhaps did not contemplate the image they create of themselves. It is what it is, is how they are thinking, I suppose. Perhaps that will change next year. Greta obviously got her story by now but look at Anna. What is her story? The story and the image is part of the message. To create a reach, the activist has to have their story. That is the thing that, for example, a journalist will write about. If there is no story, then they will not write. For example, the sign should be homemade. Definitely. It should also be readable and perhaps not change too often. It is part of the image. Make that sign sturdy and like Greta, you carry that thing with you all the time. It is part of your trademark.

I think that climate activism will take on new routes next year. There will be more art forms included in the activism. Poems, Books, painted art of course, songs, films, standup, cartoons, dance, theatre, street performances. It will be everywhere. These means of expression will also be part of that story I am talking about. The classic Friday For Future activists will also be there alongside the more unruly Extinction Rebellion and others.

You have just seen the beginning.

The day after painting Annas's portrait, the morning sky was beautiful. 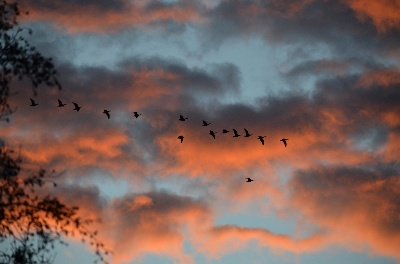 On BBC Radio 4, this Monday morning Greta Thunberg was a guest editor of the "Today" program. While I listened to a touching interview of Greta's father Svante Thunberg, I took this photo of a flock of Geese flying to a backdrop of clouds lit up by the rising sun. This was a very poetic moment.

I am also a father of an autistic child. I can very much understand what Svante is saying.

If we are listening to each other, this world is going to change to a better place, but most importantly, listen to science.