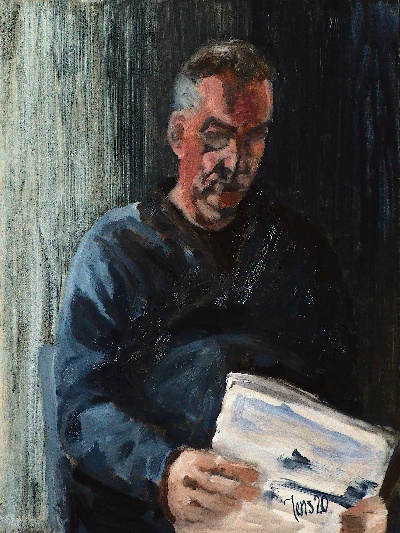 It is Sunday, 12 January 2020, and I am on my way to a live painting session in Amsterdam. The train I normally use was not available due to maintenance. That had not been a problem if I checked the train situation beforehand, but I did not do that. Luckily, I arrived a tiny bit early, and I discovered that my train was canceled, and I could take an earlier train.

Enough about that. I have replaced my broken Bluetooth keyboard with a little secondhand windows laptop. On that, I can type my blogs on my way to the painting sessions.

It is warm for the year. I have not adapted to that, so I am dressing up in an extra sweater, shawl, and gloves, and hence I am steaming hot right now just by biking to the train station.

This weekend I was helping a colleague with printing an action figure for his son on my 3D printer. It is the most challenging item I have printed on that printer, ever. I recall earlier experiments with the printer, where I found out how difficult it can be to print an item. In this case, the colleague came to me and asked if I could do it, and I said yes without first seeing the figure. Normally when I design things to print, I design them for printing. Now the design came first.

At Zuid, I switched to bus 15. Need to get out at van Schouten street.

The process of creating something usually holds a challenge. The process always requires some skills. In the case of painting, it is about how you handle the brush and the medium and all that. With a 3D printer, it is about how well you slice the model and how well the printer handles the model. I don’t say 3D printing is art, but it is a skill. Currently, it is a rough ride with bus 15, I can almost not write. The bus is shaking up and down so much that I, by accident, hit random keys.

When I force myself to print only models that I know will come out nicely, I am, preemptively censoring my own ability. In a way, I am doing this with art as well. I chose the motives to fit my skills. If I want to paint a lot of leaves with a purple background (Like the recent painting of Emmanuel), I use other techniques. This is perhaps the result of experience.

I feel that now when I accepted the challenge of printing the figure for the son of a colleague, then I must pull it off in a way that his son will not become disappointed. The stakes are higher in this case.

In this, my process starts. I make attempts, and I evaluate the result. I try to identify culprits in my process. This is the same that I do when painting. It must be fun too, and it is fun to do. I figured out that it would become easier if I reduced the details of the figure. There are functions for that. I find it almost as a metaphor for painting, I do that all the time when painting and I talked about that earlier.

Writing on this laptop works like a charm. I love it.

The model today was supposed to be Eva, but she called in sick in the middle of the night, so Saskia had to hire another model. This was Hans. He kept his clothes on, so this was primarily a portrait session.

The artists today were Tom, Floor, Irene, Ron, and me. Saskia had an especially festive closing event of her exhibition, so she could not paint today. She delegated the timekeeping work to me.

What Hans actually changed a couple of times during the session was his hand. Hands are challenging and many times I skip the hands because they are not so rewarding to paint for me right now. This time it worked out reasonably well.

After the session, Irene, Floor, and I attended the festive closing of Saskia’s exhibition. Floor has an Etsy store, and it sounds like a good idea. Irene is building a house as well and will stop working in October. Well, her house is almost finished. 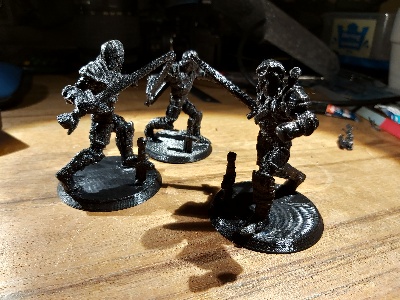 Here is the action figure. First, I printed it upright. To do that, I had to introduce support. The surface where the support has been lying is not looking nice. The layers are then, of course, applied horizontally, and that sword sticking out of the base became rather fragile. To avoid all that, I decided to lay the figure down on its back. Then only the back and the sword had to have support. An issue then was that I until now printed with material for much higher temperatures compared to PLA. The base plate of the model curled up. The layers of the fragile parts became diagonal, and that was as such much stronger. On the back, I had to have much support, though, and that did not look nice.

To avoid extensive use of support, I decided to cut the model in several smaller pieces.

There was just one small issue. The model I got had more than 100k faces, and Fusion 360 is refusing to work with meshes that are that big. There is a function to reduce the number of faces, and I used that. Kept as many details I could, though. Just enough reduction so that I was allowed to convert the STL-file to an editable object.

When the model could be edited, I could cut off the base so that it could be printed from the top. The swords could be lying down horizontally while printed. I cut the figure along the side so that one part could be the front of the figure and another the back.

When all was finished, I glued the pieces together with superglue and I obfuscated the seems with a soldering iron.