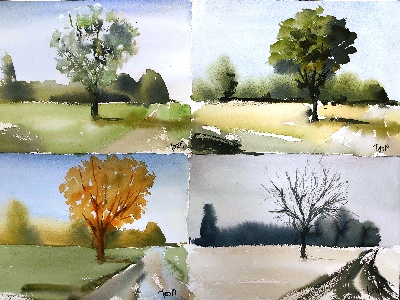 Tonight the theme at Aquarelmere was the four seasons. Because of this, I could not paint a portrait tonight.

I searched for a sample image and found this on the Internet. I liked this because it had a great perspective in the picture. It was four real photos and not some abstract representation of the four seasons. Surprisingly many of the peers at the club embarked on painting from memory or painting something that they could not see. For example, making four seasons of one subject. For a subject like this, that becomes a significant handicap because you need to emphasize the differences in the seasons and not just do the same motive four times with a "winter" color, a "spring" color, etc.

I recall that I painted this theme before. That previous time I made a painting that I invented myself. This was much better, I could gather inspiration from the sky in the pictures and how it looked like.

All four were painted at the same time. I made the sky first, and in the upper left, I forgot to leave white in the tree. That was no big problem because I could borrow a little white from Hilde.

As a little joke, I decided to sign all four seasons, and this was fun.

And how is the house going? Hopefully we get the mortgage accepted from the bank tomorrow. I am holding my thumbs.

I got a tradition of bringing with me the paintings I make to my work. Sometimes, of course, I think it is hideous, and then I don't do that, but most of the time I do that, and colleagues appreciate the paintings. It is interesting to hear what people are thinking about paintings. This painting received a surprising amount of appreciation from my colleagues. Because of this, I bought a frame at a second-hand shop for €9. When I had cut the passe-partout and framed it, I placed it on the sofa. I went blogging a couple of meters away. After a while I could hear how the glass spontaniously cracked. I had hardened the screws on the back to hard. So I had to bring it to a frame shop and they replaced the glass for €30. The shopowner was a chainsmoker so the painting smelled tobacco when I got it back.

Here it is hanging at my work.