I created two more cartoons! I made my previous cartoon about the elephants in the room on the second of December and I posted that to Twitter. There came no likes on that cartoon, and that is fine because I don’t make art to get likes. At that time, I was frustrated about the silence in the climate debate among people. People should no be silent. They should talk to each other, that is much better.

Of course, what I would like to see is a quality discussion about the climate. Making my first cartoon made me feel less frustrated. 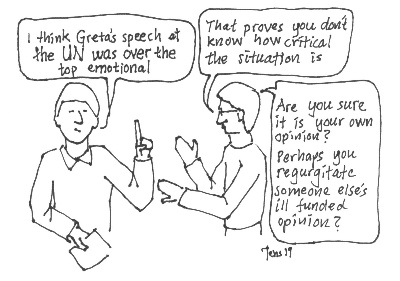 On 8 December, I drew this cartoon and it was done surprisingly fast. Also, this time I got no likes. With that cartoon, I figured out what my character should answer, and he delivered it right away. Not like me, who needs a couple of days to come up with an answer.

On 16 December, Greta became the Time Person of the Year. Ever since Greta became known a year ago, I think I was her follower number 300 or something; it has annoyed me how people are trying to be funny on behalf of Greta and is just failing every time. 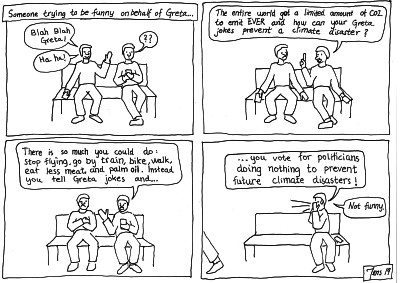 Now since I found a way of unloading frustrations by making cartoons, it felt appropriate to take on this frustration.

This time I used a lot more time to get the cartoon right, I had to redraw it several times. I draw the cartoon on regular paper with a pencil. I can adjust things with an eraser. When things are good enough, I transfer the pencil drawing to a new paper by tracing them with a fine liner. For this, I put the two papers on a glass plate that I illuminate from the back.

After publishing this Funny on behalf of Greta cartoon to Twitter, I got three likes! That means I displayed my cartoon to 111 people. 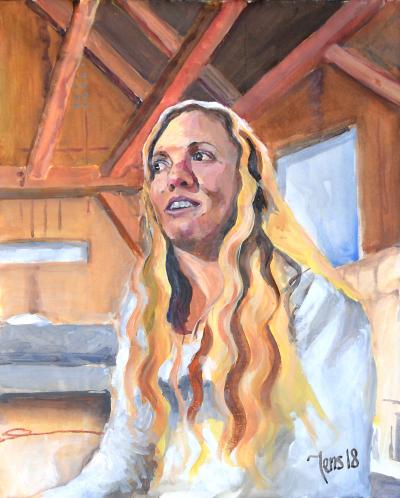