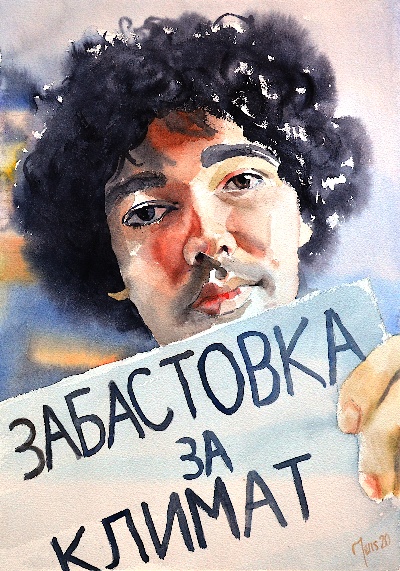 Here is a blog post of the things I was thinking about when I painted a portrait of Arshak Makichyan, a Russian climate activist. Arshak is demonstrating at Pushkin Square, Moscow, to demand political leaders to prevent climate change and transition the fossil fuel industry to renewable energy.

For me, this is one straightforward sentence that spins into many different thoughts. Many times a question is more explosive than an answer so let us play this firework for a moment:

I think that renewable energy, in general, is a decentralized industry, whereas the fossil fuel industry is mostly centralized.

If we just look at the size of the machines used to manufacture fossil fuel, they are big, like large oil rigs and massive pipelines. For renewables, it is mostly smaller things like solar panels and windmills. The only exception I can think of is hydroelectric power, often immense structures. Besides that, just from looking at the size and the complexity of the tools that produce the energy, I would say that the fossil fuel industry is a centralized business.

Who is at the center here? There is a strong man in the center and at the top of a Russia that produces fossil fuel. He has been there almost as long as I can remember.

You have people that like to cuddle strong men. I cannot stand them. Without saying it out loud, they implicate they too one day would like to become an affluent person, and I suppose they are thinking that cuddling strong men could help them reach their innermost fantasies. They go every day and think that maybe if they vote for a strong man and extremist, they too could get a little share of wealth. They are so naïve.

In reality, strong men are backed by centralized industries, like the war industry but especially the fossil fuel industry and corporate media. They are thankful for every moron fooled to vote for them without getting anything in return: no wealth, no power, nothing.

Don’t get me wrong. I hope that all of you reading this text will become rich one day. I think it is perfectly acceptable that some are poor and some are rich. But when you cuddle strong men, you get fear, and you get runaway climate change. Strong men don’t do pandemic task forces; they let you die on your own. They have you stay until the flood is a fact, or let you be exposed to wet-bulb temperatures for too long.

Most importantly, strong men don’t care about future generations—neither humans nor animals. Everything exists only to be used. When consumed, it is disposed of, and someone else needs to clean up the mess.

When transitioning from the fossil fuel industry into renewable energy, that could also mean a transition of the political system, you never know. The logical question then is if the strong man in Russia is agile enough to transition to a role in a renewable situation? I am sure that he will adapt because he is an extraordinary man.

I heard that Vladimir Putin speaks fluent Swedish. The two of us could have a chat about things in Swedish. Imagine one day I get a phone call from Vladimir talking in Swedish about the transition into a renewable industry. That would be cool. Vladimirs daughter lives in The Netherlands, am I told. Perhaps Vladimir shows up in the town where I live?

Is it not remarkable that I get all these thoughts from one sentence?

When I painted Arshak, I had the idea that the expression on his face was saying to me, “This is the situation.” Perhaps a small smile as if Arshak has a good taste of satire and sarcasm. Arshak considered a career as a violinist. Did you know I play violin too? Probably not that good as Arshak. I can play Swedish folk music on my violin.

I don’t know any Russian. It made me feel insufficient that I would not know what his sign was saying, so I figured out a cheap way of finding out. In Microsoft Word, you got the insert symbol window. There I selected the Cyrillic subset. Then I looked up each character of his sign by looking at how the letters looked. 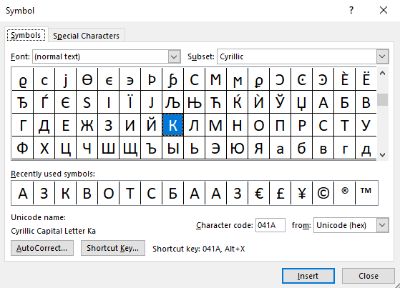 I inserted all the characters until I had this full sentence: ЗАБАСТОВКА ЗА КЛИМАТ.

Then I went to translate.google.com, and it gave me that it means “CLIMATE STRIKE.” I think that in the Cyrillic alphabet, all letters are uppercase. I could be wrong on that. Either that or there are lower case letters but they look the same as the uppercase just a little smaller, is that what it is?

Anyway, now I know what his sign says, and it is Climate Strike!