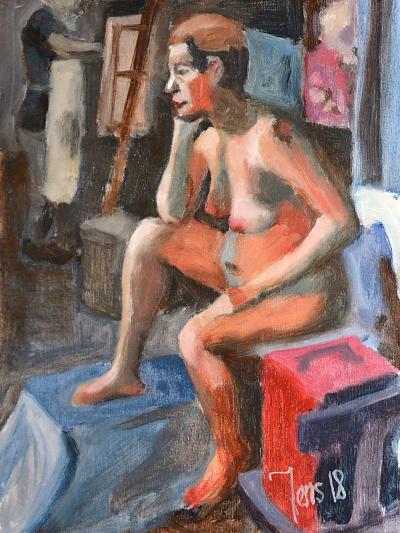 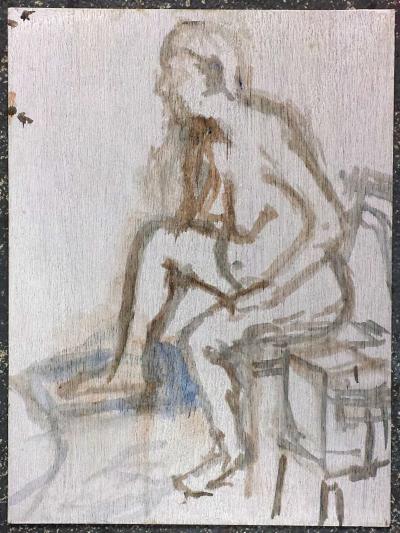 It is Sunday 25 of November, and I am on my way to the life painting session in Amsterdam. I am not in my favorite train. I am on a train to Amsterdam Zuid. I got a tray, but it is slightly further away compared to my favorite train so that it is not comfortable.

This week was active. I already blogged a couple of times. Even though it is just short notes, it feels excellent posting about the painting and the progress and life. I woke up this morning with the feeling it was Monday already and that I had slept over. When I finally realized it was Sunday the wake-up experience was so disturbing that it was not feeling great that it was Sunday instead of Monday.

The aquarelle works of my go well right now. It feels good. I made paintings recently that many people told me were good paintings but I noticed they had an issue with parallax because I have the aquarelle painting lying on the table in front of me. If I am sitting the parallax is substantial. A foldable stand could be the solution. Something like I made for my mobile phone a year ago, but bigger. Need to think more about that.

Another project I have right now is that I got a second-hand IP camera. It has a shattered cogwheel. I am recreating this wheel with the help of the 3D printer. Worked on that yesterday evening. I counted the number of teeth on the shattered cogwheel, and then I draw the cogwheel in Matthias Wandels app that I bought. Then I import the wheel into Fusion 360 and model a cogwheel of it. It is a bit of guesswork. After a while, I have power tools and things everywhere. Having a workshop will be great.

No new news on the house, the dot has to be set on the 3rd of December.

I missed the bus at Amsterdam Zuid.

In the summer I got myself a new bag for my painting gear. It is a Carlton bag. I can have it on my lap with the keyboard on the bus. Everything is shaking and turning, but the bag was perfect for using under the keyboard.

I arrived at Witte de Wit street, and I was not too late. That was great. Ron was before me, and last time he had been standing on the rightmost spot during the first session, and he wondered if I would mind switching with him.  That was an excellent idea. Later Luc arrived, and the place Ron had chosen was too cramped, so he moved again.

The artists today were Lydia, Floor, Irene, Saskia, Ron, Luc, Ans and me. It was the third and final session of Maya.

I painted Maya with all the things around her, and I even painted Irene in the background. Tried to exaggerate the use of warm and cold colors. I am curious about how the three paintings are looking next to each other. When I came home, I placed the pictures on the floor and had a quick look at the result.

The art that Saskia had made of Francesca last year was in the background, and it was included in my picture as well.

Some other artists wanted to take pictures of my painting. Oddly satisfying. The other painters did a great job as well. It is so inspiring to see how others are taking on the challenges. 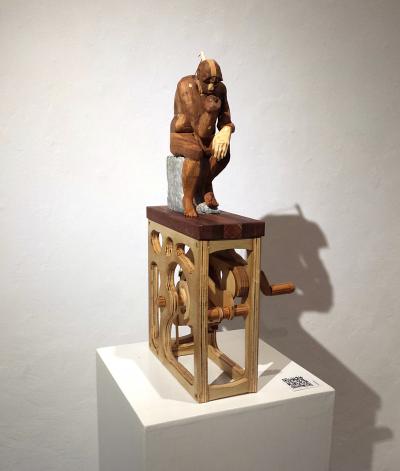 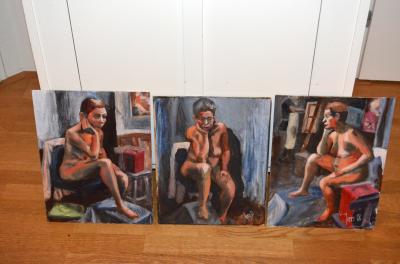 On the first floor, there was a new exhibition by Kees van Eunen. He had the official opening yesterday, but some people could not come on the opening session so he had an “after opening” so to speak.

This was not just paintings. He made machines of wood that displayed various scenes from a thought, saying, poem or song. There was a little handle to turn and so was the scenery played. He also had a YouTube channel that he started two weeks ago. This was really cool. I asked him if he heard of Matthias Wandel but that was not the case. I thought of Matthias because of the cogwheels of wood. There were also bottles with art in them. Little figures of paper that he had placed in bottles. The wood he used was scrap wood that he found or in some rare case he had bought the wood. Kees also has a YouTube channel. Please go and have a look!

I can see myself make little machines of wood as well. But I am thinking of doing it with a CNC machine. I might not even be afraid of including a bit of microcontrollers in the art. For things like this I will need a workshop.

Now I am stuck in Weesp. I am on the train but the train is staying in Weesp. I don’t see the purpose of this. Oh ok, we are leaving now. And now there is no sun-set. It is pitch dark. I arrived at the trainstation in Almere. It is half past 6.