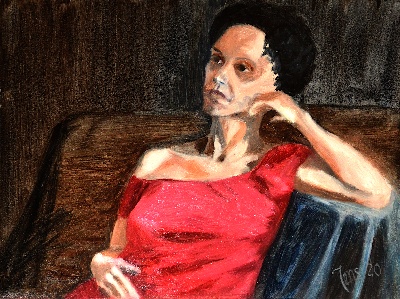 Today it is Sunday, the 8th of March, and I am on my way to a live painting session in Amsterdam. I am on my favorite train. It is full, but people are not standing (coughing) in the aisles. Luckily.

Right now, the hysteria about the Coronavirus is in full swing. On the one hand, it is difficult to scare me for this virus. I have seen plenty of statistics so that I think that my chances to survive are good. On the other hand (the washed), the survival chance is not distributed evenly over the population. Older people should lookout.

We had planned a birthday party yesterday. At this party, two elderly were supposed to come. It did not feel right for me to let the party go ahead. These two are in the 25% risk of dying if they get the virus. I suggested canceling the party. That was not a popular decision. Now I am seen as a hysteric person. I can live with that. Next week we might have a full-blown Corona catastrophe in the Netherlands and at that point I am the responsible person. We will see. It is very much up to ourselves how this crisis will pan out. Are we willing to cancel birthday parties? There is much call among regular people for that we should not be afraid of this virus. At the same time, I see a virologist saying that this pandemic is the scariest thing he has seen in his whole professional life.

How are we going about with knowledge? Are we listening to the experts? Are we only listening to the people screaming the loudest, or are we looking at real information? This pandemic is unusual because it is a crisis that plays out much quicker than, for example, the climate crisis, but we neglect it in the same way. The wealthy and rich claims there is no need to be worried. They want us to go on and produce and consume products as always. The middle class needs to go on traveling around the world. Go on, on, and on! We are stupid. The rich are isolated and safe. They have their private jets and cars. Rich people do not need to be with regular people. The more unfortunate people get, the less choice do they have if they want to die or not. The middle class travels, and they are spreading the decease around the world, and there is nothing that can stop them from flying, not even the deadliest virus since the Spanish flu. Not until people are actively prohibited from flying, people will stop doing it. Then it is too late. That is when people in refugee camps are dying like flies. That is when regions in war have more people dying of the Coronavirus than by bombs and bullets. We live in a truly sick world.

The artists today were Ron, Irene, Saskia, and me. The model was Suzana. I had the same place as last week. The idea was to zoom in on Suzana.

I had great fun painting Suzana. I had a place where I could take a step away from the canvas. I recall saying to myself that I would do that a little more often, but the studio is not that big that I can do that from all spots.

It is overcast and even raining a little bit.

Next week (counting from Monday) we will go to the notary on Friday the 13th of March. At that moment, we are the owners of the plot. I went there yesterday to have a look, and it was a little better weather. It had dried a little bit, did not sink into the clay so much as last week.

The builder called us on Friday and asked us how far we were in the planning. They had a customer in front of us in the queue who had a bit of a problem, so the builder wondered if we could perhaps switch place. That way, we would get one step ahead in the queue. It could mean that we start building the house five weeks earlier. They did not promise anything, but it sounds great. If that means that they have everything ready in the factory but putting the building up at the same time as the original plan, then that would be a disappointment. The exact date of when things will happen is in the tiny details that we still need to figure out.