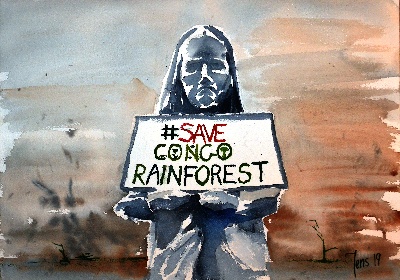 Wednesday, 20 November 2019. I just painted a climate change deniers worst nightmare. This is a painting of the writer and climate activist Grace Elm. She is right now campaigning for protecting the future of the rainforests in Congo. She got a self-made sign saying #SaveCongoRainforest.

I like it most when the activist is making their sign by themselves. The letters on the sign are, of course, important, but that they made their sign themselves makes the message stronger. It is proof that the message is their own message. There are other activists using printed signs, and that is fine as such, but printed signs make the message come a little less from the person's own hart as I see it. In this case, Grace decorated the letters (I copied her letters as good as I could). You can click on the image to get a bigger version of it. There is a bird in the "C". A flower in the first "O". "N" got some dots, and the last "O" got its own tree growing inside it. In the real sign, "S" of Save had some kind of flames as well. This is the personal handwriting of Grace. No one else is putting this sign in her hands. This is her own genuine message.

Grace keeps the message simple, and she makes her message into a tag. It is short and powerful.

She became much more angry in my painting compared to how she looks in reality, but I don't see that as something bad. That is an extra added value to her message. This an important message. You cannot go around and smile and look beautiful all the time when you are conveying an important serious message.

When the message is received, in due time, there will be time to paint other paintings of Grace as a powerful, beautiful independent writer. But that is for another time. In my humble opinion, Grace is part of a new generation of women fighting for the future of the planet. There are some men, too, and that is good, but it is primarily the women that is the driving force in this movement. They are determined, and they work hard. This movement is a climate change denier's worst nightmare. Every family needs one of these.