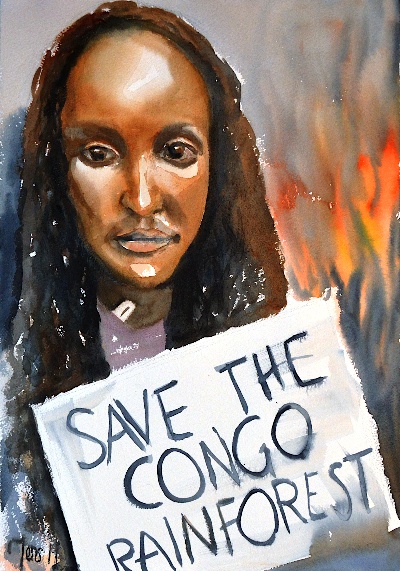 On Monday, 11 November, I painted Vanessa Nakate from Uganda.

It was a rainy Monday evening, and I picked up my painting gear to start painting, how did that happen? First, I need to stress that it is unusual that I paint outside the aquarelle club evenings on Thursdays and the model sessions on Sundays.

This was very special, indeed. I started talking to a writer, Grace Elm. She is writing a book about climate activists. Since I was already planning on painting a series of climate activists portraits, I got interested in her project. Then she called out for help on illustrations for the book. I took contact with her, and sure enough, she could accept my help.

This got me thinking about collaboration in general and the boundaries of things. I offered my help "for free" because I already got a job. I don't need to do this for a living. Obviously, it is not for free. It is going to take my energy, but that will be my support for this writer. Sponsoring, is that the word? Essentially I already planned for myself to do a series of portraits of climate activists, so now I can combine this with the effort of the writer.

I think that doing it in collaboration is a great thing in itself. The whole will be greater than the sum of the parts. This already got proven the way it panned out! The writer mentioned she was working on the story about Vanessa Nakate. I had not heard about Vanessa. So I started researching to see if I could make some kind of portrait of her.

Vanessa is a girl from Uganda. She is working to save the climate and environment in general, but lately, she has been focused on rainforests, specifically the rainforest in Congo. All rainforests in the world will need to be saved. Obviously, it is so that an activist should raise awareness of the problems on her own continent first. That is what Vanessa is doing.

This was the reason I picked up my gear on a Monday for the first time in a couple of years. I painted Vanessa, and it was a quick painting. I did not get a perfect likeness, but there was a picture, and it was not totally off. I thought I could redo the whole thing, but I decided to show the painting to the writer first to how the thing would pan out.

There were some options: She could say it was hideous and tell me that. She could say she liked it and that was it. The thing that actually happened I had not expected. The writer showed the image to Vanessa, and Vanessa tweeted the image. The followers of Vanessa started to praise the image. It was not until much later someone pointed out that it was not a totally correct likeness. Fine with me, I was the first to find out.

So there you have it, many new cool things happened to me:

It feels encouraging for me that young women are putting this energy into saving the species on this planet. I do support that. It is not a man who is going to save the world, it is going to be a woman. This is my firm belief. She needs all the support she can get. If the support is given with encouraging notes on twitter or collaboration – it does not matter so much. All little things will help.

If you read this. Go out and help. It does matter.

I am wondering who I will be painting next. For that, I need to talk to Grace. Stay tuned.