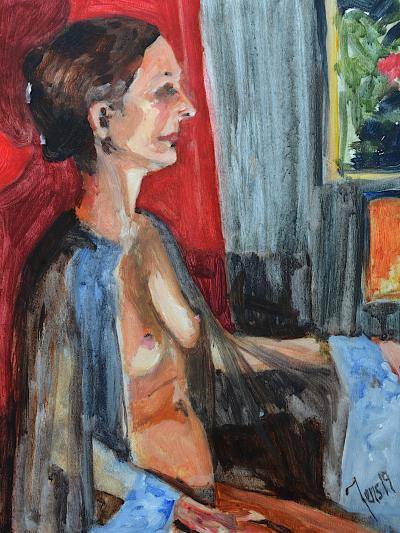 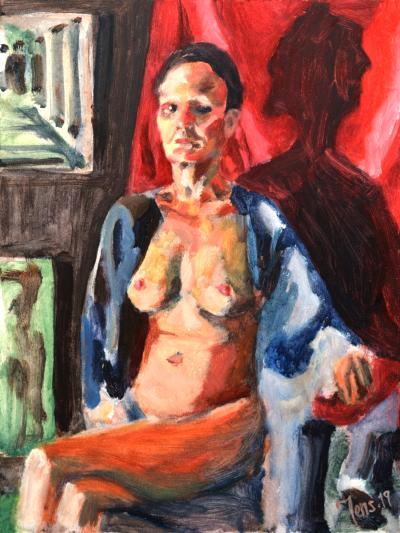 It is Sunday 10 February 2019 and I am on my way to a live painting session in Amsterdam. That is the painting to the left. Last week I did not have any time and energy to write any blog, that is the painting to the right. I am disappointed on myself for that. The house and the plot is taking time and energy. I am making concessions in my every day life to create the new life. It is frustrating but I will need to find the compromises in this.

Last Thursday the Aquarelle club had a portrait drawing session. I was not even there! Instead I went to a meeting arranged by the road association to be created. The association will organize the building of the road for the people having a plot in that area. There need to be a board and all sorts of things needs to be organized. For example how are we going to vote and whom is allowed to vote. How do you decide on how to vote before you have a voting system all agrees on. Well this was established during the meting. Then the meeting went on with the subject how costs will be shared by the future members of the association. That part did not went like I had hoped on. I will not go into details but I can say that at the meeting it was decided that all members having a suggestion for a plan would be allowed to present this to the other members and that pleased me. I got until Sunday to deliver my suggestion. This Sunday morning 12 minutes past the new day I sent my plan to the board of the association. Now it is up to the members to decide.

Last week I painted Susanne. This week I paint her for the second time. It is rainy and awful weather. We are approaching Amsterdam now. It is a crammed train. People are standing, but the atmosphere is pleasant.

The artists today were Irene, Chef, Floor, Saskia, and me. I took the spot where Tom were standing last week. I discovered that I had completely forgot to clean the brushes last week. That is an absolute no for brushes. Well I can recover the brushes by putting them in solvent but every time I forget them they will gather a little more paint to be permanently dry and little by little they will get stiffer and stiffer.

At first I tried to paint in landscape orientation. While doing so I got an idea for how to measure the model. I figured that if I decided on a specific basis measurement and took a step backwards from the easel then when I had luck the painting had the same measurement as the real model. I could put the thumb on a brush and measure a distance on the model and without moving the thumb I would have the same distance on the painting. I thought this was really clever. Unfortunately the layout would become better when in portrait orientation and when doing so the basis measurement would become bigger and the method did not work anymore. I will try out this method another time.

It went fine painting Susanne. It became no masterpiece but it was good practice. She posed in a silhouette position from this location. Have not done many silhouette portraits so that was good.

On the way home I found a mobile phone on the seat next to me in the tram. I gave it to the conductor. Last time I found a mobile phone several years ago I took on the effort of finding the owner. That was really much work. It worked but it took some time. The owner was happy. This time I just gave it to the conductor. I do not know what happens with mobile phones in the tram. Will people phone the train company and ask for the phone? I hope so.

Now I am almost in Almere. I need to remember the brushes