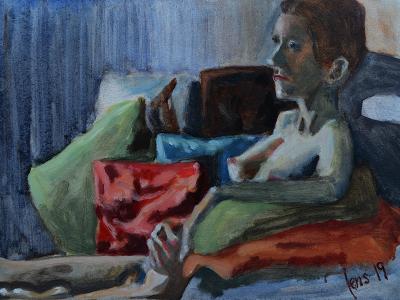 It is Sunday, January 27 and I am on my way to a life painting session in Amsterdam. It is rainy today, pouring. I looked up the train this morning, and all was fine this morning. When I arrived at the station a couple of hours later, there had been a “collision with a person.”

This is the third week I am blogging about going to Amsterdam, but I have not published the blogs on the Internet yet. For now, these are my notes, and later I will need to catch up. Luckily I am sitting on my favorite train.

Today I will paint Hanna the third and final time. Last week I made a painting of her where I had cut off the top of her head. Perhaps I should try to paint her whole head this session.

Last Tuesday I went to Antwerp for work. I had a portrait photoshoot. I went there together with a colleague by car. The forecast said there would come snow in the afternoon. Because of this, we left Almere very early in the morning. We arrived at half-past eight, and we were done at half past eleven. This was fortunate because Tuesday 22 January 2019 had the worst traffic jam ever and we missed it.

In the evening there was a meeting planned with the road association (to be created) for building the new road to the houses of the area where we will have a plot. On the way to the meeting, we got a telephone call that the meeting had been canceled because many people were stuck in traffic. From then it was a bit silent from the road association. No more news from there.

I have been drawing on our plot. I have been drawing every free moment on that plan. This is the reason why I have not uploaded any blogs. The theme for this week was to calculate the shadows are cast of the buildings. There is as a program SketchUp that could do shadow simulations but I could not get that working at all. The geolocation was not set or it was set but the program cannot calculate anything in Europe. It is a program made in the US so why should shadows be different in Europe. No in Europe the shadows are the same as in the US so at 11:59 there is shadows and 12:01 it is dark. A bug.

Today the artists were Ron, Lydia, Chef, Saskia, Irene and me. The model was Hanna, and it was her final session today. She is not saying much. Not even in Swedish. Hanna sat beautifully.

Today I did not make any masterpiece on the one hand, but Hanna’s head had the correct size on the other hand, and all agreed on that. Since Tom was not there today, I could take his spot, and I was on time to do so. I was standing near the lamp, and it was warm. The painting was situated in portrait mode. I placed her head in the upper left corner and included the hand she held on her belly. The other hand would not fit in the painting. Some artists are not doing any layout like that. They leave a lot of space around the motive. I try to make the most use of the area I have, and because of that, I need to figure out where I place the motive.

When I had drawn the sketch, I decided to check the sizes of things. The control phase. I usually make use of other reference points when controlling than when I construct the drawing. When doing so I figured out I had to wipe out all except the head and start over. That way I lost half an hour of the session. That was unfortunate. From time to time this happens, but usually, I learned things about the model in the first round so the second round is much quicker.

Now I am in Almere. I need to remember to clean my brushes.