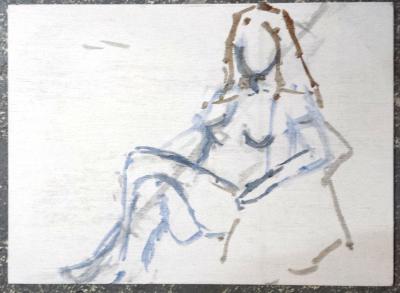 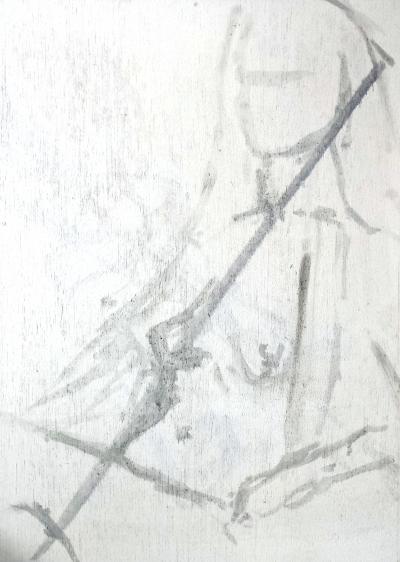 It is Sunday 11 of February 2018, and I am sitting next to a group of people from America and just a few seconds after sitting down one of them said to the other “good for you.” Is it so that this phrase can be said with sarcasm or can it also be said positively, or both? Somehow these people sound like more sophisticated than usual tourists from the US.

Today there is a very faint sun, but overall it is overcast. The wind is chilly today. I am on my way to a life painting session in Amsterdam. It is the second and final time I will paint Violet. She is such a sweet and good-looking model. A real pleasure to paint. I would like to paint her from another angle today though because I was not happy with the spot I had last Sunday. I hope for a little more from the side, that would be better. 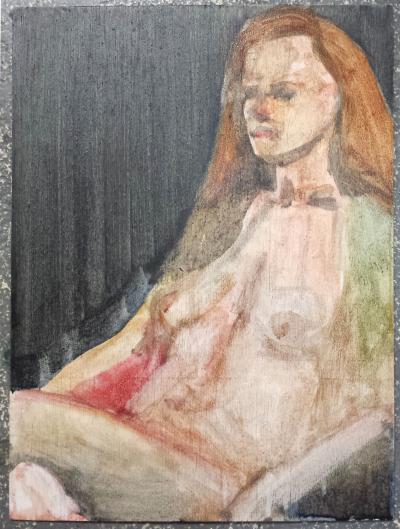 There are “Öppen Kroki” events in Sweden as well. You find it in the bigger cities of course, but I also found it at Jönköpings Läns Museum that they got Kroki once per month. The next time they got a session I will be on my way back from my holiday so that will not work. Planning this better next time would be nice. For this purpose, I signed up to the newsletter from the museum.

It has been a hectic weekend. Friday, I had a half day off. On the free half, I went to Delft together with my daughter, to move her stuff into a new apartment. She is studying there. We also went to that Swedish furniture were-house to pick up some furniture for her room. Yesterday we celebrated my wife’s birthday with the nearest family. It was good to connect with the family and catch up on things.

After the family event yesterday evening, I worked on my electronics project again. The water automation project. Previously I had the ultrasonic sensor and the motor connected, and that worked fine. Then I restarted and added an LCD. After that, I also tried the ultrasonic distance meter, and now it was time to connect the water pump. Then the texts on display got garbled! I tried different things like shielding the motor, but that did not help. Then I connected the pump via a very long cable to see if it disturbed at all, but that did not help either. So, the only thing that helped was disconnecting the motor. Debugging electrical issues is a new era for me. Somehow the operation of the pump is disturbing the LCD. Hopefully, a bit of logical reasoning will help. Perhaps I can find a solution tonight. 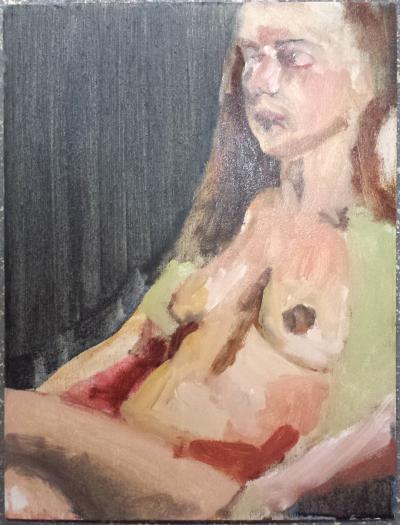 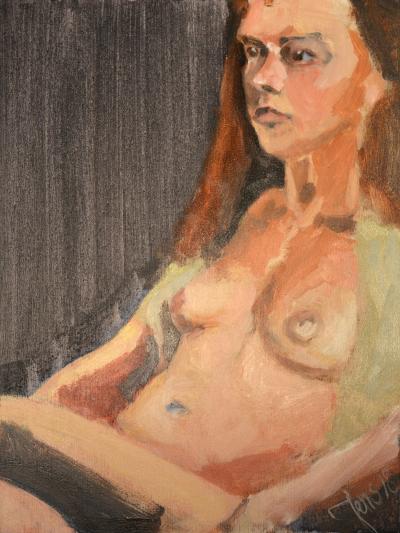 Now I am on my way home to Almere.

The artists today were Irene, Frank, Denise, Saskia and me. The model was Violet.

Since Tom was not there, I could take his spot that he had last week. It had the potential for a better layout of the painting.

It was a special session in that sense that I was not lucky in my drawing. First, I spent half an hour on a layout with the entire Violet in landscape mode, except her left foot. The proportions were okay in this setup, but that missing foot was annoying.

Then I decided on making a painting in portrait mode with just her upper part. I measured the dominant angle, and I was feeling brilliant, this could be one of my most successful paintings ever. So I thought.

And then I failed on the proportions. I measured a distance from between her legs to her right breast. The same distance to her throat. The idea was that I would measure her head accordingly, but I missed that, so her head became too small. Then in a break, Irene and Frank had a look at my progress and Irene said that I could perhaps measure the size of her breasts one more time and at first I could not understand this. Then I realized I had made her head too small. With a too small head, the breasts became too big. So then I wiped out the face and did it over. At that time there was one hour left of the entire session.

Nevertheless, I painted Violet with painters happiness. The final result was not bad at all... but, the head became too big.

The sky over Amsterdam was beautiful this afternoon. 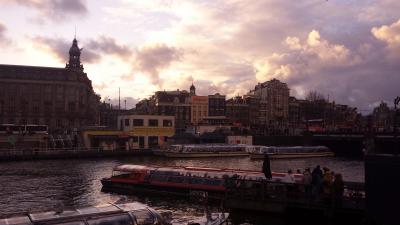