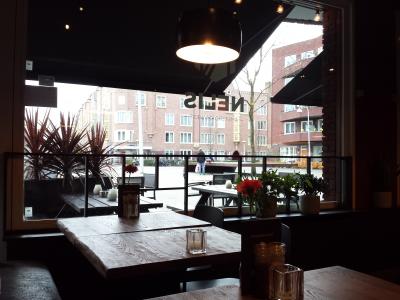 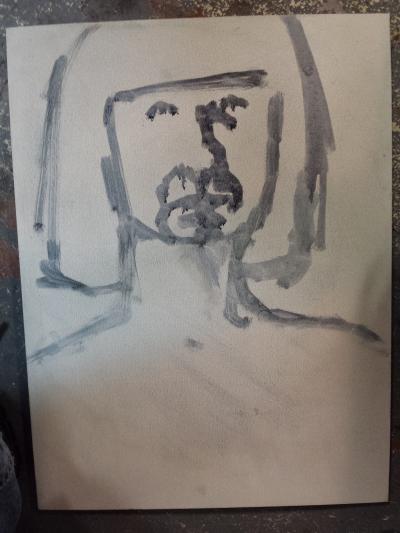 It is Sunday 26 of November and I am on my way to studio de Stoker in Amsterdam for a live model painting session. It is Anna today and it is the final session with Anna. Indeed I painted her four years ago when she was pregnant.

I picked up the book in April 2016. It is a really beautiful book but it contains many words. Yeah, right my blog posts also contain words. I know it sounds stupid to say because a book should contain many words. But I could not get through it somehow. Perhaps it did not speak to me, or perhaps it is too thorough? Yesterday I got this feeling that perhaps I should do jump stops in the book to find something that “spoke” better and I found the section about likeliness. That was great because it had a totally different take on likeliness than I have seen so far. 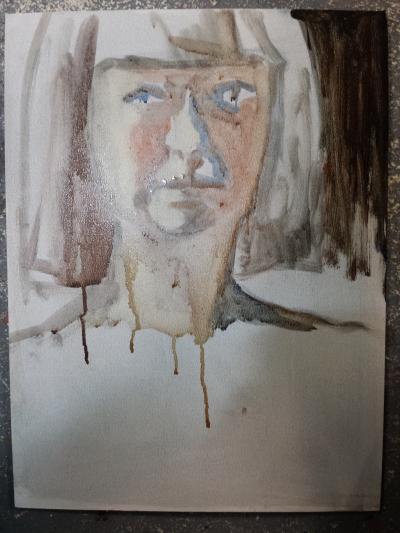 The bone between the eyebrows is called glabella in Latin. They suggested you build the portrait from the glabella and downwards. The book said that you should measure the distance from the innermost eyehook to the wings of the nose. Then from the straight area under the nose to the lips. Then the width of the chin. I still have to digest this. Read it several times again.

Also a couple of pages later the book said you should not use charcoal for sketching a portrait! If I had read that a year ago I had just skipped over it. Now I reacted like AHA!

Today I will try to make a portrait. 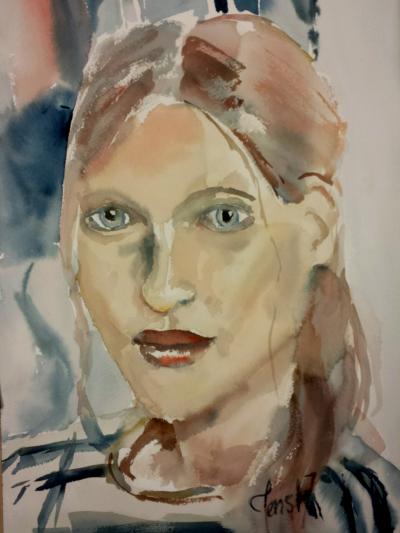 On Thursday I painted an Aquarelle portrait of Alice Herbst. I think it had some likeliness. Liked that.

For the rest, this week has been about Arduino. It is funny because I have a similar experience with Arduino and the book. It turned out that I had got a computer magazine in the post but it has been lying unread the whole weekend. I have been searching the entire Saturday for cheap Arduino Nano boards but they come with counterfeit USB ports and the genuine owner of that technology FDTI changed their drivers so that the counterfeit components gets bricked. I decided to buy the genuine hardware. The magazine on my table had this explained.  I read it after I found out.

Now I am almost in Amsterdam Centrum. It is nice with trains that arrive on time.

When I arrived at de Stoker it was closed, I was too early. Then I decided to drink a cup o coffee at Nelis. I had just got my cup and the sky opened and it poured precipitation from the sky! They got a fudge you get with the coffee with the slogan “Home is where the fudge is”. I find that funny.

A few moments later it had stopped raining. Somehow I was still feeling lucky. Many times I am lucky. Now I need to switch my head to portrait mode. I really want to use my time wisely and make a portrait, a good portrait, a portrait with likeliness. I can do it! Especially now then I know the Latin name for the bone between the eyebrows, glabella, it should be possible to make a good portrait.

Now I am on my way home again. The artists today were Bas, Luuk, Tom, Saskia and me. Frank was not there.

Anna was sleepy today but it went well. I worked on the portrait. I decided to make a portrait in such way that her chest was included but not her nipples. I also cut off the top of her hair. And I was sketching and sketching. After 30 minutes I had a blank panel. I even decided on painting one sketch and then abandoned it and started over again. Normally I am not that hesitant. This hesitancy was more than usual. On the other hand in this process, I observed the features of her face carefully. I contemplated about the book while sketching Anna. 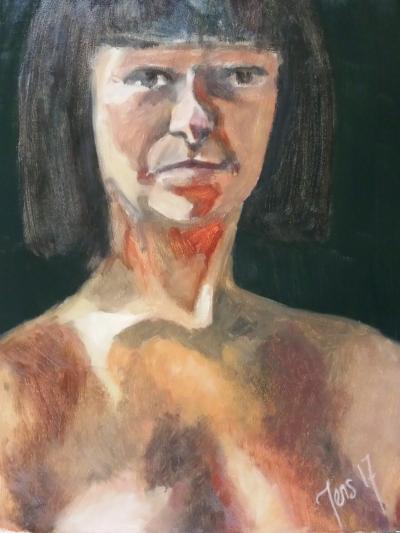 It is so easy to say that you should measure but much harder to do in reality. The measurements are relative to each other. I observed that the distance between the pupils was equal to the distance between glabella and the upper lip. And the distance from chin to under the nose was the same as under the nose and glabella. I noticed the height of her head was exactly the same as from under her chin to below her breasts. It is these similarities you do things with. Saying that you have to measure something while drawing without saying what you should compare it with is like saying it is a long way to Copenhagen. It is nonsense. What it did though was taking some of the distances more seriously than others. I could concentrate on them. It was hard work and I signed the portrait 8 minutes before the end of the session.

I managed to get on the 8 past 5 PM train to Almere. It is an Intercity train and it takes 25 minutes to get to Almere. That is really nice. I spent my time writing on this blog. I posted the image to Instagram.