The tiller machine fluffed the surface 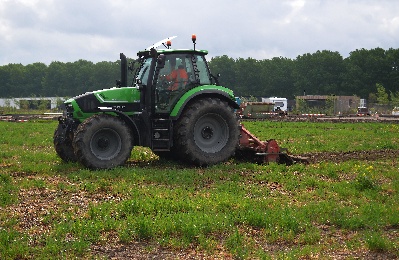 Today Knipscheer BV came with a tiller machine. They fluffed the surface where the sand trailer had been driving off-road. We know that this is not improving the soil deeper into the ground, but this was the option we were given at this moment. In little more than one hour, he had finished the work. 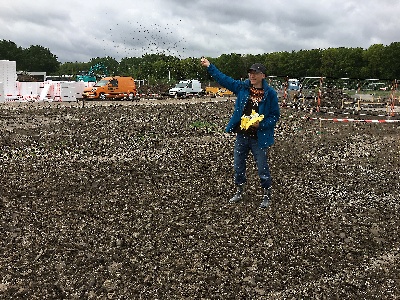 It feels like now the garden is ours - at least the part where our builder will refrain from carrying out activities. We had a leftover of grass seeds that I planted like a meaningless act. I say meaningless because in the next two weeks there is no rain in the forecast. If these seeds were to sprout, then they would die. When the time is right, we will do it properly.

Here is a little movie of me planting the grass. 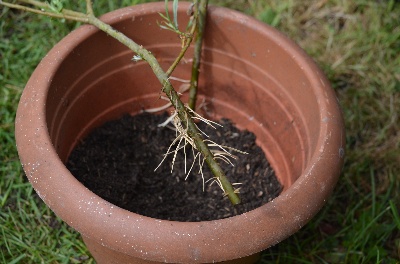 Since the corona crisis began, we have been doing lunch walks in the neighborhood of our old house. There are a couple of places with impediments. Places where the weed is taking over, where there is no maintenance of the terrain. We collected three shoots and cut some branches there. We placed some branches in buckets of water, and today it was time to see if any of them had got roots. 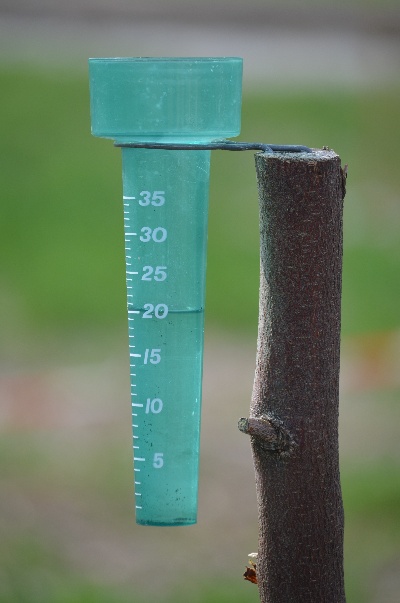 The second task was to empty the rain gauge for the second time at the plot. We had received 20 millimeters since 30 April! It feels like a gift.

Perhaps it is nice to know how much water there has fallen, but I don’t know if it is useful to write down that information. Since the work of writing it down is not that hard, I just decided to do it. When I start to forget entering it, or this information is totally irrelevant, I will stop doing it.

For me, in my life, this is the time of many small beginnings. A sheet with information about the amount of rain falling at the plot is another beginning. It can be useful in our gardening. I have no idea.

Today I also started to put out the driveway for the second time. Last time the design of the driveway was curvier. After we had put it out last time, we concluded that it was too curvy and decided on redoing it a little straighter. We figured that larger trucks would not be able to use the driveway. It just had to be less curvy.

We had an offer for building the driveway based on the drawing of the curvy version. The building company wanted to get a new map of the latest version, so I had to make a drawing that resembled what we had straightened out at the plot. We got the same price for the straighter version. Now we had the driveway outlined not matching version two of the design. Just a sheer frustration here.

Perhaps it is just me, but I hate these half situations. If we have a design of the driveway, then it should match reality.

Another reason for redoing the outline was that the tiller machine had wiped out parts of it. We had marked the driveway with large chunks of clay. The tiller had made these to evenly distributed smaller pieces of clay.

The new design was made with perfect arcs. The previous driveway was based on Bezier curves. 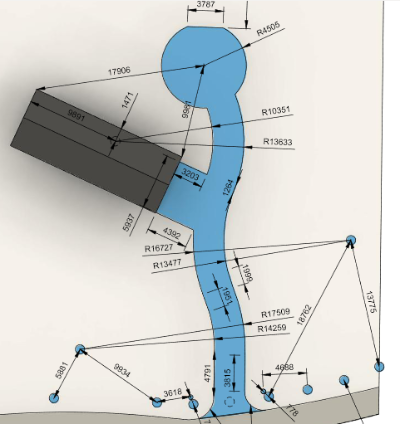 As an example, the first outer bend of the driveway has an arc of is 17509 millimeters that equals to 17 meters and 50 centimeters and 9 millimeters. That is 57.44 feet. The center point for the last part of the driveway is inside the house. It will not be possible to measure that when the house is standing. Luckily that is not necessary.

This morning we went to an impediment again and took a couple of more branches. Then we got to the plot and drilled hole for the stems and planted them right away. This is another strategy, just do it right away. There is a risk they will not make it, but we are willing to try that. The earlier shoots and stems will stay in our old garden so that we can water them and keep them strong and healthy until they are ready to move to the plot. 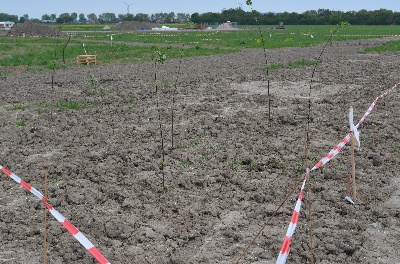 We planted the sticks at the point of our garden near Mrs. PMT’s plot. Cars driving into the area will see this as the first thing they are seeing. We were thinking the vehicles could be shielded off with a little forest of bushes at the tip of our garden.

In general, the issue from here on is how we will water the plants. If we had access to water in the plot, it would be much easier be to plant things. We are looking into if it is possible to get a groundwater hand pump installed. That would be great.

I finished the outline of the new driveway. When I am standing at one end looking at it, it is not feeling any less curvy than the original design. This has to do with the perspective you got when you are standing on the ground. That is much different when you are looking at something from above, like in a cad program. This is to say there is enough curviness left, and it is hopefully straight enough so that a truck can drive on our driveway. This is so cool I cannot wait for the driveway. The thing is I have to wait for it another three weeks, also that I will need to hope that there will not be additional delays.

We had an old stash of seeds from various plants that we decided to spread at the plot. This can cause an explosion of flowers, or there will happen nothing because they have become too old. I will need to water this area, but I will love the idea of colorful flowers so it will be nice.

On the theme of doing things for the first time, it was the first time I weeded at the plot. I collected thistles that I made a little pile of, and this is also the first compost. It will be necessary to make it into a habit to search for and remove thistles because they can become a plague in this area. As long as we consequently go after and removes them, there are no problems.