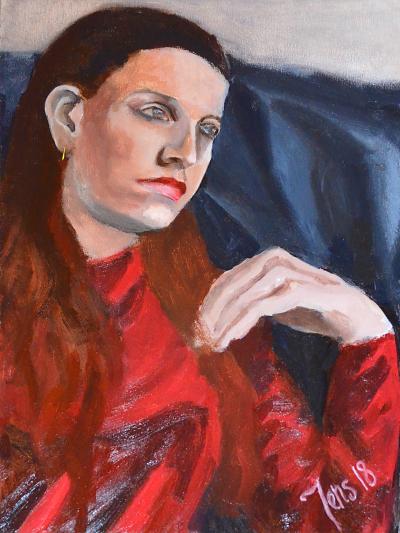 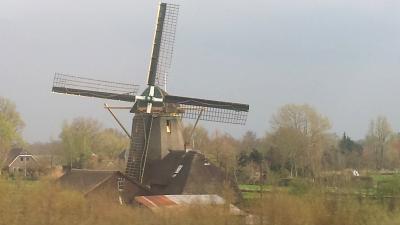 Today it is Sunday 15 of April 2018, and you guessed it, I am on my way to a life model painting session with Francesca. Today I decided to finish the painting that I started on last week.

I still have not figured out how to get the main menu in Word for Android. After some time it shows up, but it is as if one has to write for a while before you are honored the right to see the main menu.

Last Thursday I painted a portrait of Miranda, and I blogged about that too, if you want to see that blog post you click on the previous link at the top of this page. I made an aquarelle portrait of her. At first, I had just intended it to be a painting that I usually do at the aquarelle-club, and that is all there is. I don’t project anything from the reference photo on to the canvas. I pretend it is a model in front of me so that I can learn to improve my drawing likeliness based on observation.

When I finished the painting, it was feeling unfair to her that I had not been able to make a portrait that looked more like her, so I went on at home improving the painting.

That became a reality check for me. I learned that last Thursday it was insufficient to draw her without extra double tests and then go ahead and start painting. There were many differences between the reference photo and my drawing. Too many.

The conductor just came and checked my card, and gave me a compliment about my phone and keyboard!

I have been thinking since last Thursday about the deviances. There need to come some ceremony or ritual after I decided to start painting where I verify the correctness of the drawing. For aquarelle painting, this is very important since there are a limited amount of possibilities to make mistakes. For oil paintings, it is less critical, but the work is much smoother if one paints without unnecessary errors.

Afterwards, it is trivial to see that the chin was too big, and the cheek to big and the nose too small and the eyebrow to low. That feeling that it is trivial afterward, but completely invisible while making the mistakes is… is… frustrating.

Now it is 5 hours later. I know that because Word just told me. I am on my way home. After I finished writing on the train to Amsterdam, 5 hours ago, I stood up and started walking out of the train. There I met the model for today. Francesca was in the same cabin a few seats away! That was funny!

She was on her way home to put on her velvet dress and then she would come to the studio. She told me that she had been modeling in Almere two weeks ago on a Tuesday evening. That sounded great. It was in a café so it was a dressed session and it was short poses starting at ten minutes and then after a while, there was half hour poses. I had no idea about this. I will need to find this place. It was on Tuesday evenings. Then I could do sculpture in Utrecht on Mondays. No, I am kidding no sculpturing for me just yet. 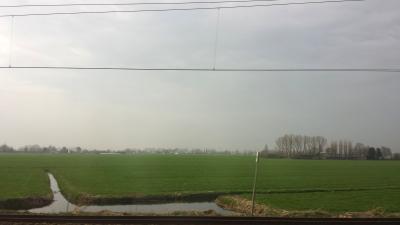 It went well to paint today although I have to say I cannot put a checkmark on "Likeliness" with this painting. The artists today were Ron, Irene, Frank, Saskia, and me. Ron had problems with his shoulder, so he went home earlier.

I continued on the painting from last week. It was a long time ago that I continued working on a painting that I started a week earlier. I kept the wet panel box in a sealed plastic bag this week. The paint had not dried entirely so that went very well. Next week there is another model that will be modeling two Sundays and then the 2017 – 2018 season is finished.

On the way home I managed to get a nice photo of a classical Dutch windmill from the coupe in the Train. I painted that windmill a couple of years ago.