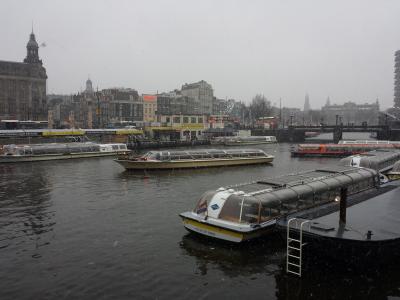 It is Sunday 10 December 2017 and I am on my way to the most adventures life painting session journey in Amsterdam. It is snowing. Right now it is just dribbling down a little. While I am in Amsterdam it will be heavy snow. Not a little. It is going to be a lot and it is going be for a long while and it is one continuous gigantic snow cloud that travels really slowly over the Netherlands. 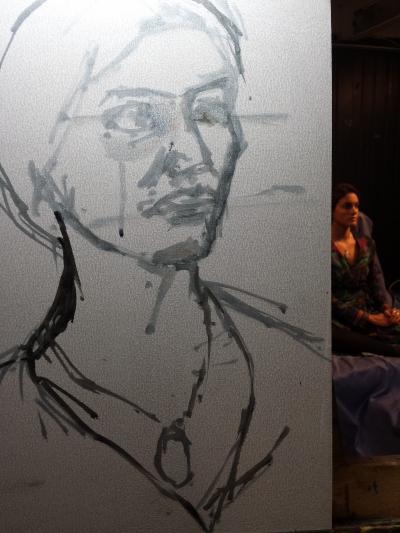 But the snow conditions today, that does not matter. I am sitting on my favorite train in a normal coupé.

It has been a lot of blogging lately. Yesterday I brought my wife to the airport because she is going on a business trip to Singapore for a week. Spent almost the entire evening uploading old blogs.

I found that Windows 10 is so friendly to automatically turn images for you. It uses the metadata in the image to figure out how it was oriented when the picture was taken. Then it on the fly it rotates the images based on that. If you then upload them to a blog server the images are lying on the side. That is completely confusing. The solution is to enable the Orientation column of Windows Explorer. Then you can see what it turned. Then it is possible to turn these images “physically” until the get Normal orientation. After that, they will upload like they look like. The command for rotating images is Alt J and then RR or RL. It would be better to have a program that rotates the image and slash the metadata. I have to think about this.

When the image is in the Normal orientation I can rotate them in GIMP so that they arrive correctly on the web server.

Now I am almost in Amsterdam. On time.

It started snowing more now. In the original central hall of the station in Amsterdam, they decorated with Christmas lights. That looked really nice. I took a panorama photo of this.

Before I went on this journey I was contemplating if it would not be a good moment to bring with me the camera backpack but I decided on not doing it. It is snowing adequately now. 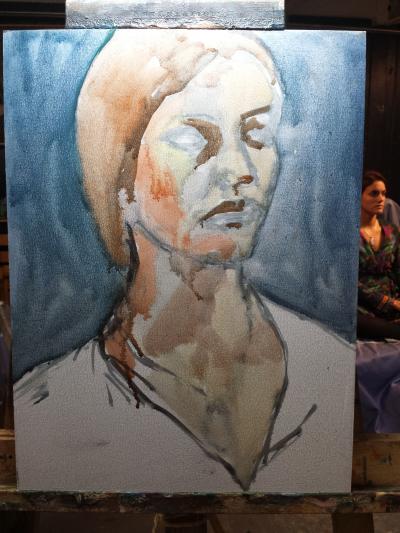 Today is the second time that Samantha will pose. She got a pretty face. I have been happy with last weeks painting all week. It can be so that I achieve better than the previous week and then I am sufficiently happy for the rest of the season.

When I arrived at the studio it was closed. I think perhaps Saskia wants people to arrive later. For me, that comes a bit unhandy because if I take a later train then I will be too late. But the solution for this is to go and have a cup of coffee at Nelis. Well not always. It is the way to luxury to do that every time. With wife in Singapore and the biggest snowfall in 15 years, I think I can make use of a bit of luxury.

I just got a message from Saskia that she was late.

Today I got another spot in the studio. Wanted to paint a new portrait. The artists were Frank, Tom, Saskia, and Ron. Ron is a new artist. He was drawing. Today Frank painted acrylic. He usually draws. 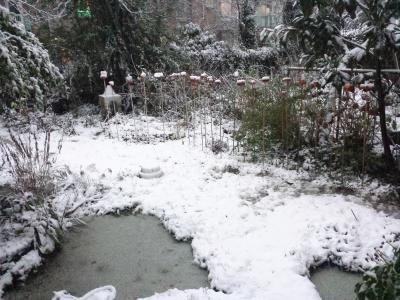 Before I left de Stoker I took a picture of the garden and how it looks like in the snow.

Now I finished the painting session. It is still snowing. The battery of my phone was almost finished. I had planned to charge it when painting but that slipped my mind completely. So how am I writing this? I went to Nelis, the restaurant nearby, and got myself a supper and a place with a wall socket. When I came it was 9% and now I am at already at 27%. 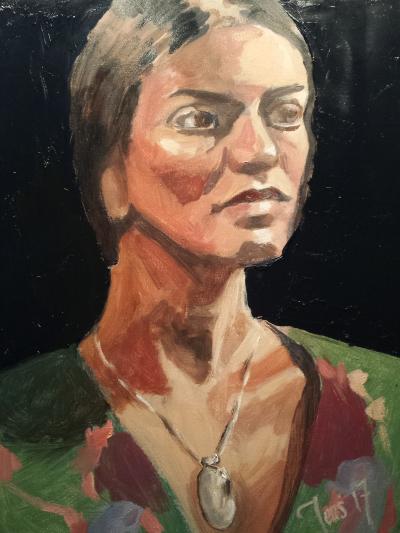 I think it went well today. It is easier to paint without fighting the charcoal. Samantha has a pretty face and she is doing well as a model. I was allowed to take pictures of her so I did. Normally with undressed naked nude models, it is not allowed to take pictures. It is not an easy subject. It is obvious that taking nude photos of a model is restricted in many ways. However, and I know for sure that many artists are not aware, the “portrait right” regulation is much more strict than many people are aware of. If you are publishing a photo of a person you will need the consent of that person. From a strictly juridical point, you can have a verbal consent but such consent is weaker compared to a written consent obviously. This model gave a consent.

At another table, two ladies are speaking Dutch and English at an Apple laptop. They talk about beauty products. I think they are planning a beauty product event in Amsterdam. The English speaking person is not happy with the response from the Dutch. The Dutch is also very often switching to Dutch. The Dutch cannot embrace the complex message of the English speaking: “We define what a cheekbone is and we tell them what products to use to accentuate the cheekbone and as such we define what beauty is”. Perhaps both of them have impossible tasks. 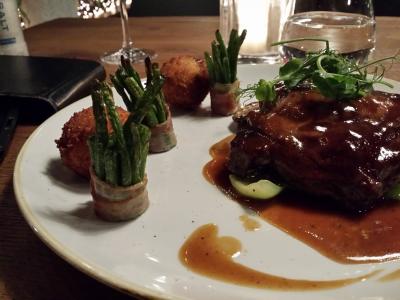 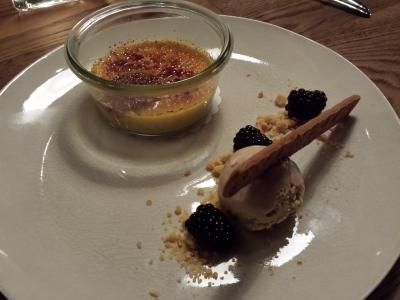 Now I finished the main course. It was a steak. It was artistically decorated! Outside it is still snowing. Now it is time for the dessert. I am at 75% now. This is going well. Another table is now occupied. It is a mother and father with their son and daughter in the 20th. I can see that on their faces. They look sweet together. 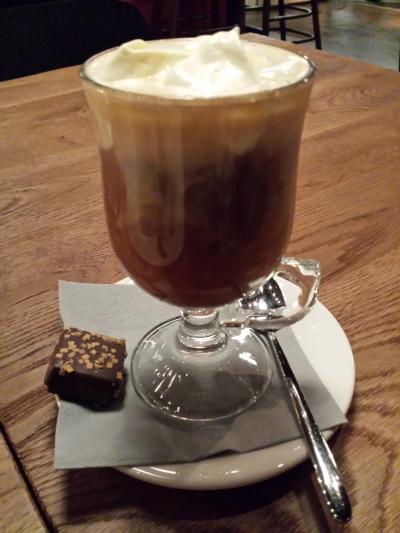 I think I look shabby in my painter shirt and painter jeans. The only thing that makes me look more sophisticated is the keyboard that I use when I write text on the mobile phone. I can see that the son of the family I checking out the nerd at the other table writing text on a keyboard and taking photos of his meals.

The painting session today was successful. Painters happiness. My meal is coming to an end. The only thing that could make this meal better would be to enjoy it together with my wife but she is in Singapore right now. It was better to stay in Amsterdam for a little longer to avoid the mess outside.

The beauty people left the restaurant. I am at 87%.

I finished my dessert. Dessert sounds so empty and dessert like. It is a pity that this word has two meanings. How can it be that it is called both something sweet you have after a meal and places on earth that are inhabitable. How do you come up with that? What is the connection?

Someone is igniting firecrackers outside, this is a common Dutch habit, and as consequence, a car nearby ignites its burglar alarm. It is snowing. Kids are making a snowman.

Now I am sitting in the stop service train “Sprinter” to Zwolle. It is funny how everybody is staring at their phones. It was a bit of confusion on the platform and you notice that people are upset about the weather. I had a nice calm time at the restaurant. I learned how to keep my bag on my lap and place the keyboard on top. I know it is bulky and I look like the nerd I am.

I see faces on the train that would be so nice to draw. If I had a pen and paper I would be sketching portraits.

The tram line I usually take to the studio is right now taking a detour because of a bridge being repaired. Last time I discovered an arts and crafts shop on the detour route. This time I discovered an electronics shop on the detour. It had the price of a raspberry pi in the window of 55 euro. I thought for myself that I had to check it out later. I found that I have been browsing their site before. It is called radio rotor on the shop and www.rotor.eu is their website. Funny how things are looking in real life and how it looks online.

The weather service had given a warning about the weather. They called this weather situation “code orange”. There have been hundreds of accidents on the roads. Well from that perspective I had a really pleasant time today!