Max Lieberman exhibition at The Municipal Museum of The Hague 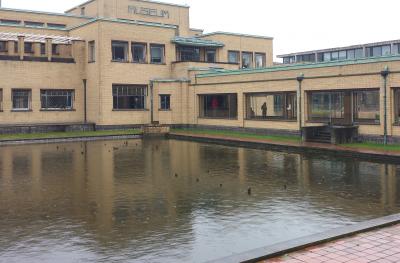 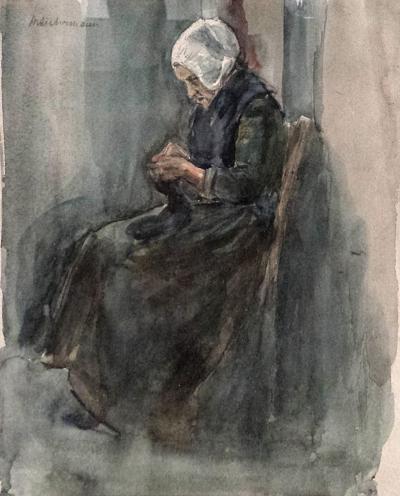 On Monday 2 April, I had a mandatory day off, one of those days per year someone else has decided that you are supposed to have a day off. Why not visit The Municipal Museum of The Hague (Gemeentemuseum Den Haag) for the newly opened exhibition by the German artist Max Lieberman? Well, it was rainy this day, and a lot of other people also had a day off. Hence it was crowded at the museum. If people could decide for themselves when they want to have a day off, it would be less crowded, but I suppose that is too efficient.

This museum is the last building that the architect Hendrik Petrus Berlage created, and he made this building mainly in the functionalistic style within the subcategory “Nieuwe Bouwen”. I got this information from the Rijksmonumenten archive about this building, so I suppose that is correct.

In architecture, functionalism is the principle that buildings should be designed solely for the purpose and function of the building. So here we had a museum. Easy! Well, not at all. The Max Lieberman exhibition was spread over many rooms and even a corridor. Almost all rooms had at least three doors. I got lost, and I lost my friends, and they lost me Several times. In a museum the narrative is essential. There must be a story, and the story should be divided into logical story arcs. If you lose track of the ordering of rooms in an exhibition, you lose the story arcs. When you lost the story, you soon lose the interest. That happened here. I am sorry to say that Hendrik Petrus Berlage did not live up to my expectations of the function. I am sure that the museum has heard this complaint already before. It would be possible to improve this with more prominent signs on the wall telling where to go next etc. Do like IKEA - Guide people through the exhibition with a path to follow.

Max was a German impressionist, and he was a good painter, but the selection hanging here was well-behaved. After the fiftieth painting of poor Dutch woman carrying out some form of crafts, it became a bit monotone. With me today I had an expert on wool crafts and the expert was not impressed. More than once the texts had missed entirely what the woman was doing on the picture. “Woman emptying a basket.” No, she did not, she was hand carding. “Woman weaving.” No, not at all, she was lacing the spools. These misses lowered the score for the museum. Please make better signs for the next exhibition!

Back in the days, Max paintings caused controversy, but to me, it became a bit dull except for one little thing that we will come back to in a moment. Max was the son of a wealthy German fabrics manufacturer and banker from Berlin. First, he studied law and philosophy, but later he switched to art.

He was good at painting, but it did not speak to me. Yes, of course, he was much more a successful artist than I will ever be. Most of his work at this exhibition was oil paintings, but there were some aquarelles too. There was an image of a woman knitting without knitting needles in aquarelle. It had a glass in front of the painting. It is a shame that you need to have that in front of aquarelle paintings. There is a kind of distance introduced with that glass. My aquarelle paintings will suffer this as well if they make it into a museum one day.

There were almost no nude images in this exhibition, and that is strange because Max was good at portraiture and dressed models and usually that skill comes with a lot of practice of painting life models. I suppose that this museum is more restricted in its selection compared to for example the Singer Museum in Laren. In Laren, they are good at signs though. The nudest I could find was an image of boys playing in the water. That is interesting though because if you think about it, is it so that such an image is considered a politically correct motive these days? My preference had been grown-up nudes and I had not included that boys painting in the exhibition if I ran this museum. But I am not.

Max had been allowed to take out girls from an orphanage to go to the sea and to drink lemonade while all other artists of the time were not allowed to do that. I suppose that Max came to the orphanage dressed like a rich man, like he was, and manners etc that unlocked the doors so that he could sit there and paint the sweet little kids.

If you used no flash, you could take photos at this exhibition. I like that a lot. At the Van Gogh museum in Amsterdam you are not allowed to take photos, so that is something you could consider when you decide to avoid visiting the Van Gogh museum. Obviously, you want to go to museums that are bloggers friendly. Had I known I was allowed to take photos had I brought with me my DSLR camera, but I had left that at home. I took some photos with my mobile phone, instead. 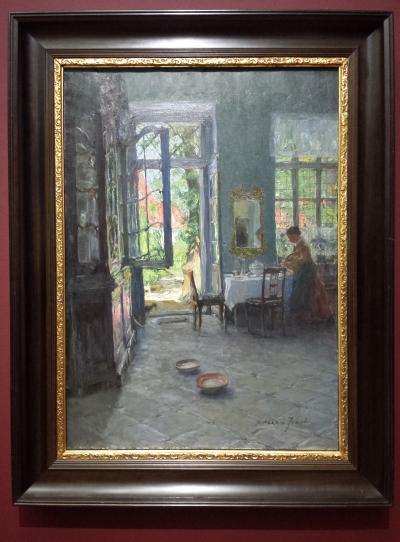 There was art from other artists as well. I found one impressive image “The garden room” by Gotthardt Kuehl. I would like to see more paintings of him. 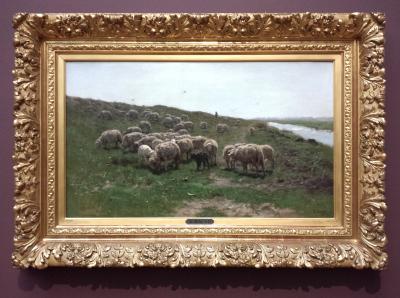 Here is a painting from Anton Mauve named “Sheep on a dike.”