We got our water well 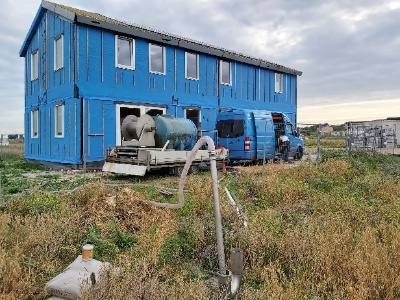 Now we started in the last week of our building holiday. The main event of today would be that we got our well. We were early again because these people always arrive early. Our son came with us today. I thought that was an excellent idea because my wife still had chest pain, so my son and I could do some heavy moving today.

The water well drilling company arrived at 9 AM, and they used the metal sheets still lying on the ground from building the house. As a result of this, my plan had succeeded! We did not know if the metal sheets would be removed and when. The foundation company had already phoned me and told us that they were about to remove the plates. I said they were welcome, but they did not show up. It could happen any moment that they arrived and removed the sheets. Then we started to enter the holiday, and it became less likely that the metal sheets would be removed. It was convenient that they could drive so far and drill the well in our future vegetable garden.

I asked the guys if I were allowed to take photos, and on that, they said it would cost me 50€. If it was a joke, I don’t know, but I suppose it was. To that, I said it is a pity because with photos I would make free advertisement for their services and then they said it was okay. If I had been as quick of though, I would have said that I wanted a surcharge of 50€, but I did not do that.

They drilled a hole with a regular pole drill by hand. They dug this deep so that just the handle was visible. Then the guy with the dark clothing smacked a stainless steel pipe construction into the ground over the hole they drilled. I made a joke that he would be good at human pole driving, but he was too busy to like that. When the pipe was deep enough, they put a hose into the tube, and then they started pumping water into the hole. The water came out and brought with it clay and sand. That way, they created a hole into the ground. When the pit had become ten meters, their tank was empty. They could not go deeper, and it was not needed.

Then they placed an outer pipe into the hole that also had a filter around it. Then the well was done. It was made quickly. The important thing was that it was not too deep for the regulations of this area. They had made it precisely right. Here is a slideshow of how they made the well.

The chest of my wife was not okay today. It was a bad day for her. We had our oldest foldable chairs to the new house, and they are no good for comfortable sitting. We have no couch at the new home, either. What we do have is Pavaflex isolation, and she lied down on one of those to find some rest, but it was not very helpful. As the day progressed, her chest pain got worse, but this was luckily the peak day of the pain.

We had to be able to sit comfortably. For this, I brought our garden chairs. These chairs are excellent, and this initiative made my wife in a good mood. I had bought some delicious cookies as well. 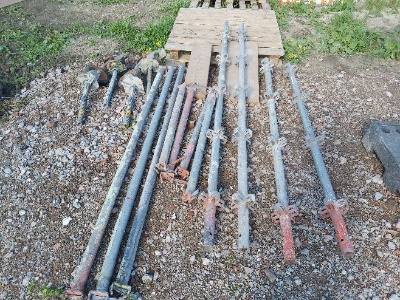 Today I started to build our Crab 48 scaffold in the hobby room on the first floor, primarily to work on the west wall. I gathered little bits and pieces to create a platform, and this is the second time I build a scaffold with the Crab 48 system. We had one pipe with a dent in it that we could not use when we tried making the scaffold outside. For this, I had found a file. Yes, it is called so. It is a tool with a rugged surface that you can grind with to remove material. I removed the dent in the pipe, and then I could use that part as well. We got two wheels with breaks and two without. 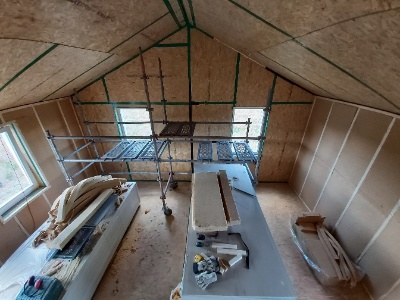 Some pieces were stubborn to get in place, and at one time, I screamed out lout of frustrations. The tool to get things in place with Crab 48 is a hammer. Sometimes things are grabbing into each other more than letting loose. It can be frustrating. I made it so that the platform could stand next to the gypsum plate stacks. Had the builders placed the stacks two centimeters to the right, my whole plan had failed.

It was great to work on the platform. My wife worked on isolating the load-bearing inner walls of the first floor. By breathing out when bowing, getting things on the floor, etc., the pain got easier.

We took plenty of breaks. The temperature got higher and higher outside. Inside it was comfortable. 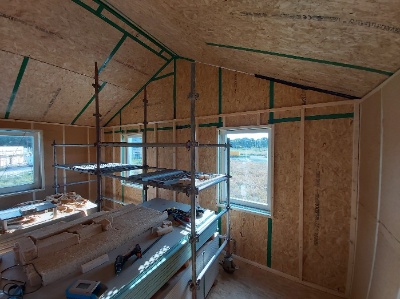 In the evening, I had finished the lower part of the beams. My wife had filled all the load-bearing walls.

It was time to water the plants. For this, I placed the wheelbarrow below the water pump and filled it with water. Then I took the water to the place where I wanted, and then I scooped water from the wheelbarrow. In this process, I was a bit enthusiastic about giving the apple trees water, so I flushed away a bit of their soil. 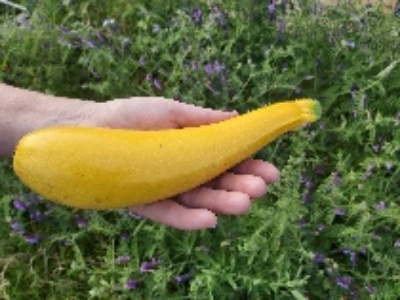 The squash is doing fine. Every day we have harvested a squash or too from the plant. We also noticed there are perhaps bloom shoots on the tomato plants at the new house, and also, the pumpkin plants seem to have bloom shoots arriving. 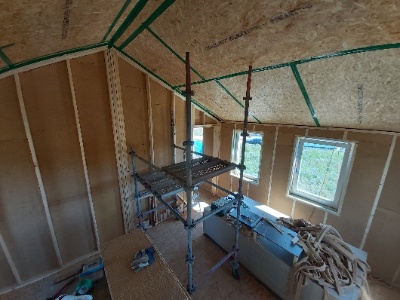 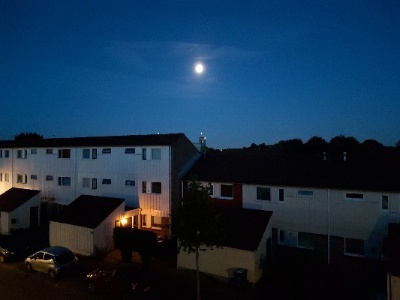 Today we had decided to go to the house early—that way we could do work before it got too hot. We woke up at 5 AM when the full moon was still up above our old house. It was going better with my wife’s chest pain. For the foreseeable future, I will be the person starting the generator. We let it out as much as possible because we do not want to spend CO2 if not necessary. Then we plan a batch of things to saw, and that is the moment when I start the generator. Then we finished our batch we turn off that thing.

Around 3 PM, the west wall was finished. I hope to finish the east side tomorrow. We dismantled the scaffold and moved all parts to the east side of the house.

It was getting sweltering outside after 4 PM. Inside it was fine.

On Thursday, we carried on working. The heatwave carried on. We made sure we arrived early to open the windows and make use of the cooler hours. Slowly the heat penetrated the walls of the new house. Since we were about to work on the highest parts of the house in the ceiling, it became less and less fun to work. 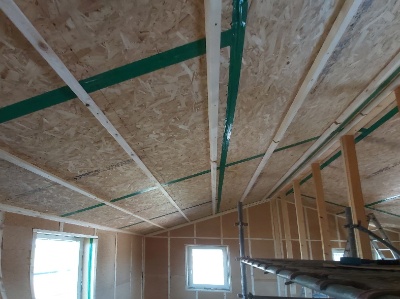 Nevertheless, we finished the beams on the east wall on Thursday. Then we started on the ceiling in the northeast room on Friday. After building the scaffold and figuring out how to place the rafters and cut them to the necessary lengths, we discovered that we had not figured out the corner of the ceiling and the east wall correctly. We had placed the beams of the wall in the corner, but then the seam of the gypsum plates of the ceiling cannot be mounted properly. The solution was to cut off the top part of the isolation and beams and place a new beam right under. We marked up the ceiling and mounted horizontal beams, and then we decided to stop working on the house, Friday afternoon. It was too hot. Outside it was 35 degrees. 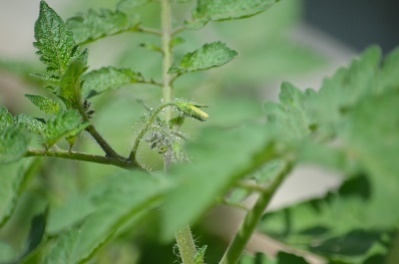 On Thursday, 6 May, I noticed that it was time for the tomato plants to start flowering. I started on the tomato project on 27 May, chopping up a regular tomato and picking out the seeds. On 30 May, I did the same with cherry tomatoes. The pumpkin plants are also doing well. There are flowers underway as well. The squash is fantastic, is it thriving enormously.

On 7 June, on the way home, we went to our old home via detour again. At the side of the road, there was a large bird.

On Saturday, the temperature in the new house was not okay anymore for work. It was of no help that we had left all windows closed during the night.

The water from the well contains iron. That was predicted. It is possible to remove it with the help of oxidation. We are thinking of something that sprays water in a bucket. For this purpose, I brought our pond bucket to the new house on Saturday. We could not find any solar panel driven fountain, though, so today that plan could not be finished.

We took all the plastic we collected from the isolation packages and brought these to the garbage collection. It is called landfill as well, but I hate that term, it sounds so definitive in the aspect of destroying the planet. I cleaned the working space in the hobby room, but it was too hot. We weeded some thistles and had a good rest. I found that the bench at our southeast corner at the road is being used. People had left garbage around it. I collected the cans and ice cream packages. Then I created a wastebasket next to the bench. I hope people will use it. I think it is funny to see that people use this place to have a break. 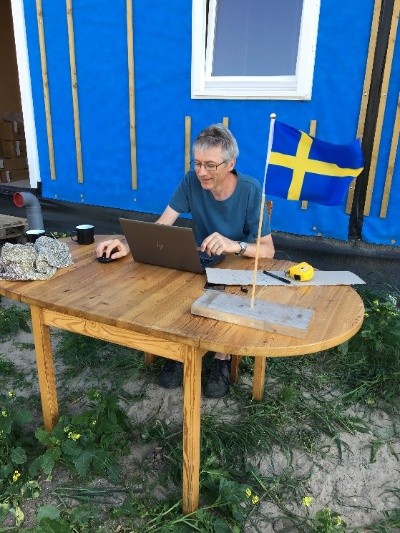 On Sunday, our last day of this building holiday we went to the second-hand shop and bought two chairs, a table and a Swedish flag for under 20€. I could sit outside with my computer. I am working on creating a new CAD model of the house. With that model, I can record measurements for when things are in the walls after they have been sealed. I can model the ventilation shafts. It will be handy.

It was warm, but there was a gentle wind, so the flag was fluttering in the wind.