Working on the CAD drawing

Our building holiday is over; it feels sad. We can now only go to the new house in the evening. So we did that this evening. I continued measuring the new home and drawing a CAD model, and we gave the plants water. It is sweltering these days. The maximum temperature today was 32.1 degrees Celsius, and we cannot work in these temperatures.

I put last week’s blog post live, and I discovered I had used the wrong settings in the word document so that all images are compressed too much. I don’t feel like fixing it right now. Staring at the screen and it is so warm. 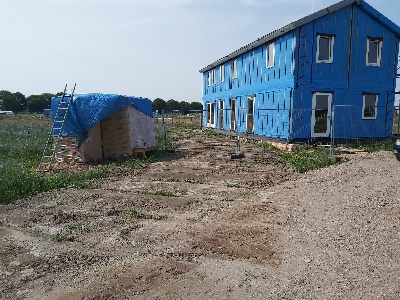 The plates were removed today. It was the foundation builders that had provided us with these plates. I am so happy we could have the plates last week Monday when the water pump people came. We will plant grass at the places where the plates have been lying.

Today our new jack arrived. We went to the new house and tried it. It can barely lift the container, and I had not anticipated this. It is graded for two-ton, but it cannot lift it. The next step in lift capacity is much more expensive. This jack had to be enough, but it is not. I have some ideas about things I did wrong. I will try again another time when it is not so hot. 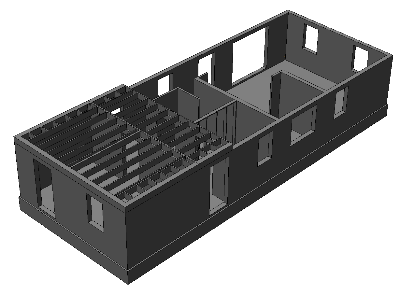 The CAD drawing now got the foundation and the first floor. I am right now busy with measuring the beams in the ceiling between the levels. I had strange performance issues with Fusion 360. I tried many things to make it more responsive. Exclusions in the virus scanner, settings preferring performance over the accuracy, I even put it in terminal service mode as if I am working on a terminal server, which I am not—lowered the frame rate. Installed new display driver, and checked that the display card was supported, it is. The funny thing was that when I worked on the CAD drawing in the house with my phone in tethering mode, then it was quick. When I went to my old home with an 80 Mbit fiber connection, it became sluggish. It had nothing to do with the connection speed. I found that if I disconnect the laptop from power, it becomes quick. From that, I figured it has to do with a power profile, but I refrained from looking into that right now. It is so hot. I just removed the power cord and ran the laptop on the battery, and continued working. It will be great when I have the model because then I can design the new ventilation system without being in the new house.

The sun is heating up over the day, and today the maximum was 33.1°C. During the night, it is very little wind, and it is not cooling off so much. The next day the pattern repeats but starting from a house already a little warmer. It takes a couple of days to make the home so hot that it is not useful for healthy everyday life and especially things that require that the brain is functioning correctly. During the night, we opened as many doors and windows as we could. In the new house, we could not open any more than we already had. It got warmer and warmer inside. 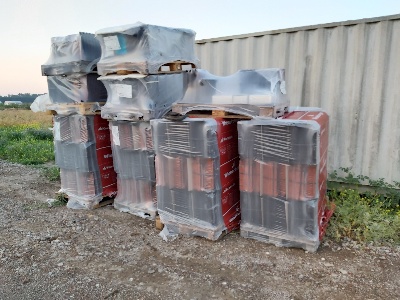 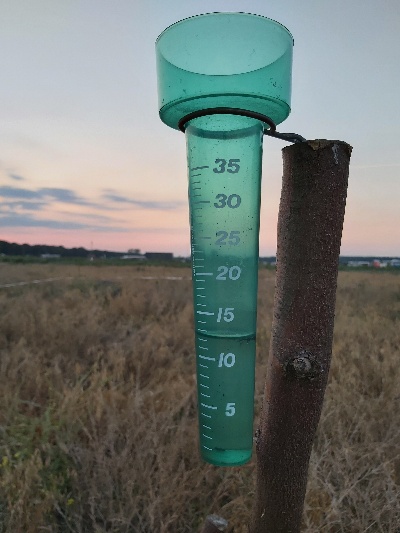 Today the new roof tiles arrived. These tiles were placed at precisely the same place as the previous, so no improvement there. They got the correct measurement this time, I suppose, so that is good. They got a darker, almost black coating. I like that. From an albedo standpoint, that is not good at all, but it will look beautiful. The previous tiles had the color all through while these got a colored coating.

It is still sweltering. The maximum temperature today was 32.3°C. Many years ago, we bought an AC on wheels. We are not using it so much. It has mostly been standing in our washing room to be used for dehumidifying. I rolled it into the living room and undusted it. I got a flexible exhaust pipe with a diameter of 12 cm that you are supposed to expand and hang out of a window. The plastic in the tube had become brittle, so when extending it, it started to break. My wife tried to find a replacement pipe in our nearest hardware store, but they were not to be found in the hardware store. She found a pipe that was 10 cm wide, so we tried installing that. It was tricky to make it fit, but with plenty of duct tape, it was good to go.

The AC came to life, but it was not it’s old personality. As I recalled it, back in the days, this AC could pump like a beast, but this was over, it had become a tired old pensioner. It ran for a while, and then it had to take a little break. Then it ran again, and so it went; it had become an old annoying, useless AC. I was creative and connected the exhaust pipe to our conventional ventilation system, and then there was no need to have a tube hanging out of a window. It seamed all legit there and then. It was hot too, so it was not so easy to figure out what was going on. We found you could reset the AC with a command to have it work harder, and people on the Internet had the same problem. We let it be and tried to do our work.

My wife also bought a tap to be installed in a bucket that we could fill with water. Then we could connect the valve to a hose and water things from our new water well. All theories, though. No idea if it would work.

In the evening we went to the house and look, we had received 13 millimeters of rain!

Tonight I measured the ceiling above the utility room and the washing room and south hall. We arrived late, so I had to do my measurements in the dusk. It was wind still and hot.

Today the maximum temperature became 32.1°C, it was feeling awful. This evening I measured the ceiling above the kitchen and south hall. The tomato plants are doing fine. There are 5 to 6 flowering flowers on almost every plant.

We tried to water trees with our watering bucket. It was not very successful because we had a too short hose.

Today it was less hot, and the maximum temperature was 28 C, that was wonderful. 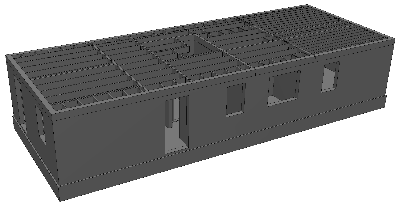 Tonight I went to the house and measured the last part of the beams above the living room. Tomorrow I can start measuring the parts of the second floor. With that, I have a base drawing that I need to design the new ventilation system for the house.

The pumpkin plants are blooming! 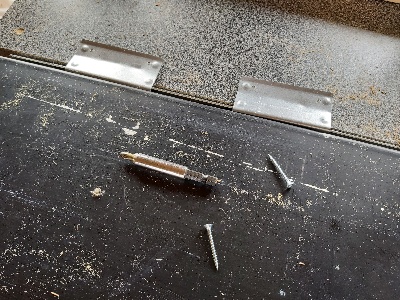 Today we started our work by discovering that we had placed the horizontal beams in the ceiling too far apart. We had put the rafters with a distance of 60 cm apart, but they were supposed to be 40 cm apart so that the gypsum plates would not be sagging. We removed every other beam and replaced it with two.

Between each 40 cm beam where seems will meet vertically, we had to place a little piece vertically. For this, we decided to change the saw set up so that we could make many of these beams. I connected the table we had standing next to our little table saw so that we could put guides on that table for longer pieces. To do this, I took gypsum package corners, and this worked wonderfully. With this, it was possible to set up the table saw to cut larger pieces. Later in the process, this turned out to be a fantastic addition to our toolset. The original table-saw table fixture could not be used to saw pieces over 25 cm. Now we could saw pieces far beyond that.

It was feeling great being back working in the house. I felt healthier and fitter. I remember I looked at my upper arm and were thinking that perhaps I got more muscles. The backache from when we built the scaffold for the first time was also gone. It was still warm just below the ceiling, but that was okay as well. 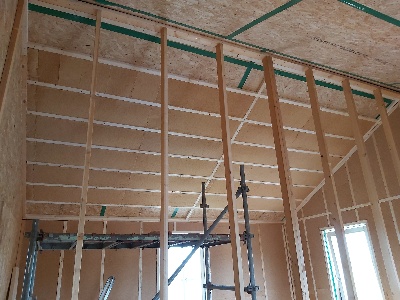 Today we finished almost the entire ceiling with 40 cm beams and isolation at the bedroom on the northeast side on the first floor. It was nice being back working at the house. 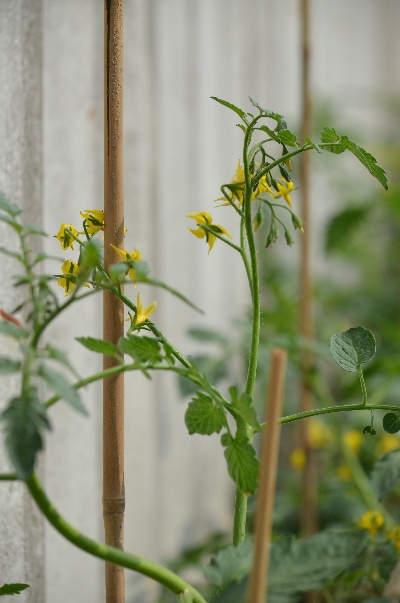 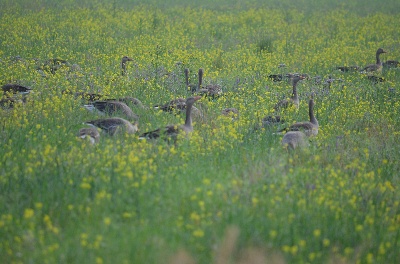 When we arrive at the new house this morning, the geese are still in the fields around the house. It is no wind this morning, and not many people are around.

Today I brought the rest of my tomato plants to the new house. At the new home, they are growing better because there is more sun. At our old home, they cannot get so much sunlight. The plants come out of the same tomato, but at the new house, there are five to seven flowers per plant, while there are one or two at my old home.

Today we started by finishing the northeast bedroom. All walls are done. Then moved the scaffold to the southeast bedroom. I started putting up beams in the ceiling, but that is how far we got today. 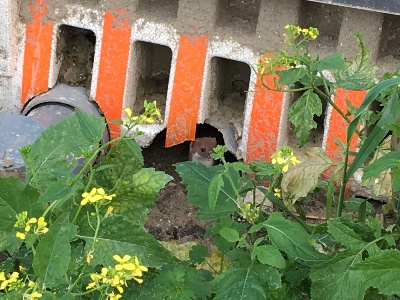 During a break, a little critter showed up at the opening of a pipe. It could be a weasel. We don’t know if it “lives there” or if it was just resting like we were.