We are getting better at the gypsum plates

This week the outdoor project progressed ever so slowly on the one hand. On the other hand, we are getting better and better at handling the gypsum plates.

It is the evening of Wednesday when I start writing this blog. I have just finished watching a beautiful episode of Wintergatan Wednesdays. It is a youtube channel by a Swedish musician and maker creating a machine that will play music by moving around steel marbles. Martin is such an inspiration! 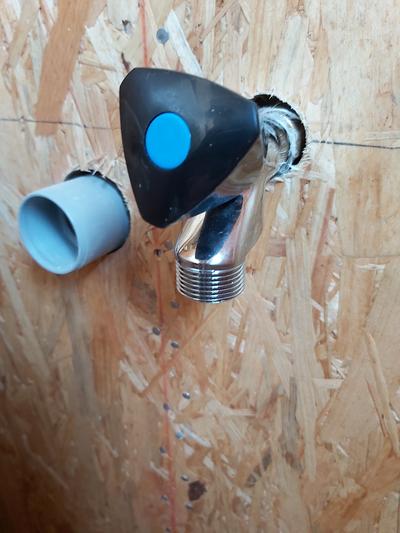 Monday and Tuesday, we took a rest from the building project like we did last week. This morning our plumber installed a temporary water tap. That means the water bottles we have been carrying back and forth to the new house for the last six months can be retired. 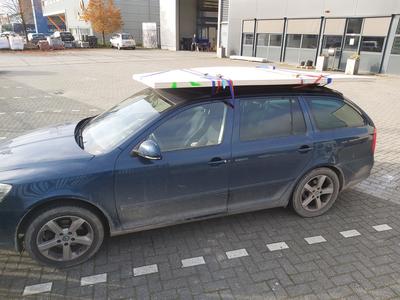 I worked half day from our old home. Then we went to the hardware store and bought four plates to put behind the gypsum in the kitchen. That way, it will be easier to put up cupboards, etc. Then we continued to the new house. Gerard, our electrician, was already present. The car got a thick solid layer of dirt by now.

We decided to work outdoors and cut more red planks for the east side of the building. It is somehow error-prone to cut the planks. The top angle needs to be correct, left, or right. The bottom cut needs to be angled 15 degrees. There is no natural flow in this work. We were making mistakes, correcting, and so on. I painted the ends of the planks and put them to dry on our scaffold. That turned out to be a mistake. Later I had to find a way of drying the planks.

When It got dark, we started working indoor at the light of our two building lamps. First, we finished the last little stripe of the living room. Then we moved on to the north wall of the kitchen.

The next wall is challenging. There we have the extra multiplex plates to apply first. We also have many holes to drill in the plates to match pipes and wall mounts etc. Perhaps it will not feel like we got the gypsum project’s momentum when dealing with these holes. 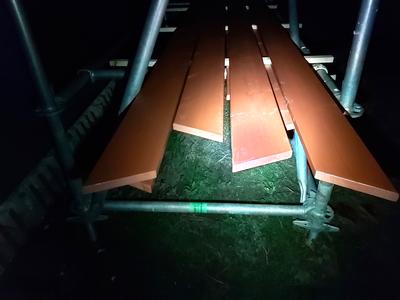 On the way home, I took a photo of the planks. Somehow I did not take any photos of the planks project while there was still daylight. We left them outside. I had the feeling this would not end up well. 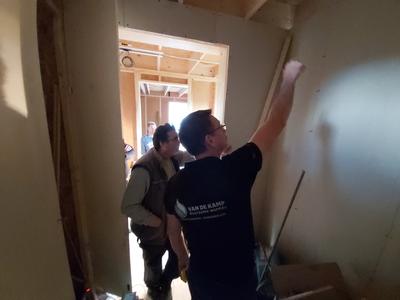 Usually, Thursdays are not so active regarding the house. Today it was a little different, though. I worked at home, but in the afternoon I went to the house. The idea I would have a meeting with the plumber, the electrician, and the heating specialist.

First, the plumber arrived. We talked about the plans for the ventilation system. I had made a design, and he got a design from a ventilation supply company. My design had drawbacks, and the supplier’s design also had flaws. We decided to take the right parts of both designs and make a new plan. The supplier had one main ventilation line along with the house. I had a star-shaped ventilation system, and we decided on one main ventilation line. That line’s place had to be done as on my design because there the ventilation is done right over load-bearing walls, which is much sturdier. I also wanted to have input and output to the hobby room on the ground floor. The supplier had scrapped that. I explained it is because odors will be kept in that room if that flow of air is in balance.

The supplier thought we had a horizontal ceiling on the first floor. We don’t. That brought parts of my design back.

Everybody held corona safe distance from each other.

Then the electrician arrived and after a while came the water pump specialist. I presented my drawing of the utility room to Gijs. I redesigned the utility room on 27 March according to Gijs instructions, and I blogged about that whole redesign.

The meeting became a grand success. Much is, of course, success when it is still just a theory, but this was feeling good. The three men understood each other very well.

They spoke about where pipes should go, dimensions, and material. It became copper. They talked about where the heater would be placed, and how it would be connected, where the indoor and outdoor sensors would be placed. They talked about how the floor’s delivery modules would be connected, how many zones there will be, and if sensors would be wireless or wired, they will be wired. They talked about what kind of cables and how electricity should be divided into groups. They discussed wall outlet locations and if they should be on top of the wall or inside the wall. There was a little scribbling on the wall here and there in the utility room. I got to make the wall sturdier. Those 12 mm plates did not impress much. We will hang up a three hundred liter tank here, said Gijs, so you need something sturdier. 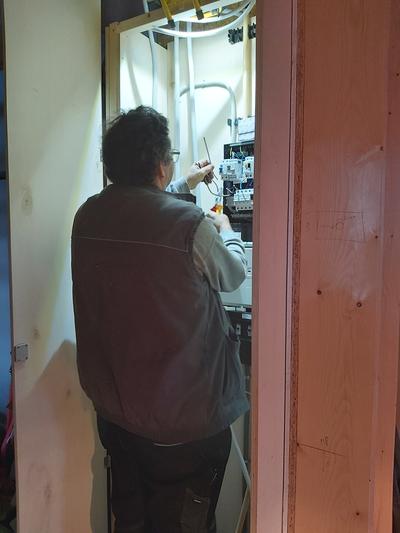 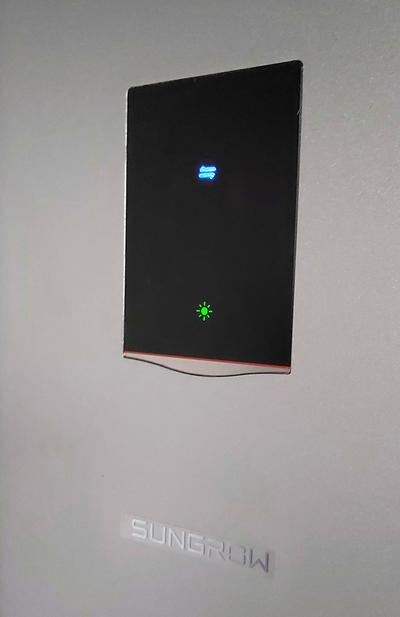 When the meeting was over, our electrician stayed a little to connect the solar panels. The unit would not start without reading the manual, but the panels are connected. There and then was no time for reading the manual.

After this pivotal event, I went to our old home, and I continued with my daytime work.

We did not go to the new house this Friday. Our electrician was busy in the house, installing powerlines. We got a question from a neighbor if it was possible to “tap” our electricity, and we agreed on this. Obviously, we should help neighbors. We asked our electrician to look into how to do this practically. We will see.

I made a couple of doodles! There has been very little art in this blog lately. As you might understand, much of my time is going into building the new house. The turns of events in the US coincided with that I was feeling like making a couple of doodles. I wanted them to be quick and effortless to make. Hence for some, I painted on the paper that I had at hand. 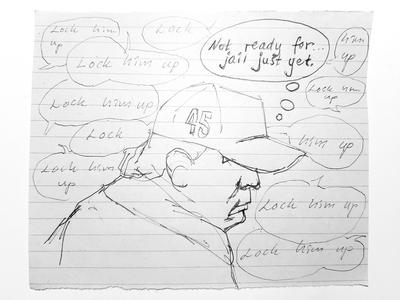 The first is Donald thinking that he is not ready for jail just yet. I don’t know if he is thinking about this. I just made it up. I remember that he went to a baseball match, and the audience was shouting, “Lock him up.” That was the inspiration for this doodle. 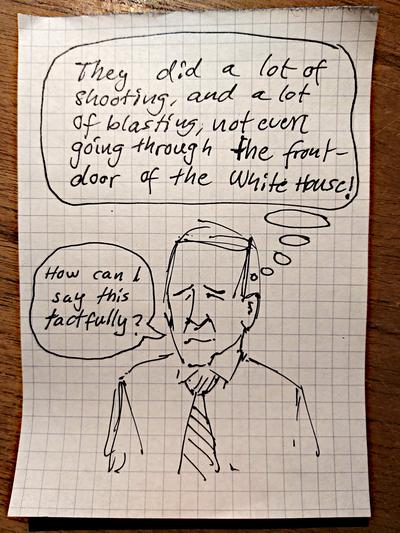 The second drawing is of Joe. I watched an interview with him. He was asked what his response was to that Donald had not conceded yet. He said that he had to think what to say to say it tactically. I paused the interview and thought about how Donald presented the killing of a person in Afganistan last year. Suppose Joe recalled that sequence while thinking of how to say it tactfully, my humoristic take on the situation. 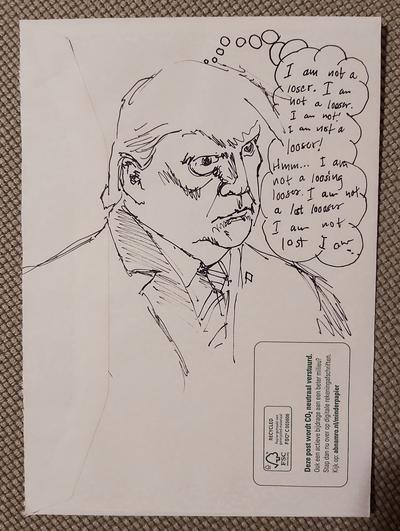 The third drawing on an envelope is of Donald again. He has still not conceded. It is funny that up until now, when Donald has been a president, I had no urge to draw him. Now he is still a president for 65 days or something, but he is the loser, and then suddenly, I feel like drawing him. 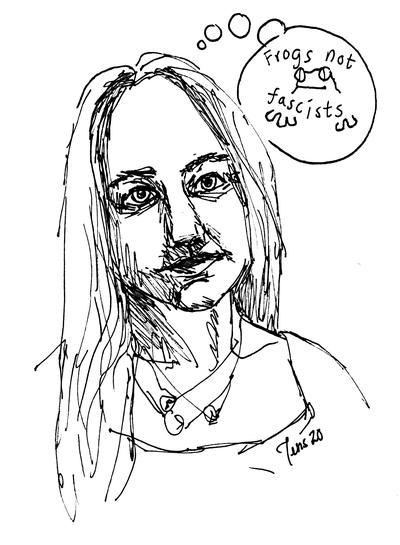 I thought that it was a lot of powerful older men in these drawings. Actually, not the right balance. Where are the young women? Because of this, I also decided to draw a young climate activist. I decided to draw Anna Kernahan. One of my last portraits in December last year was one of Anna. That time I painted her with a hat. This time I had a photo of her without a hat.

She has been creating buttons lately with various slogans and doodles. She had one “Frogs, not fascists.” I think that was appropriate. She liked this drawing! 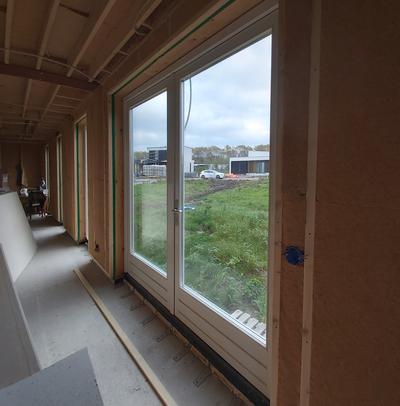 The first thing we did today was to bring garbage to the recycling center.

Next up on our planning was to continue indoors with the north side of the house, the kitchen. However, we found that perhaps there were a few unfinished details, so we need to sort these before putting up the plates there. I had not given up entirely on the outdoor project, we wanted to give the already sawed planks a second layer of paint, but they were soaking wet, so that was not an option. We put the planks to dry outside and started on the hallway along the ground floor’s south wall. 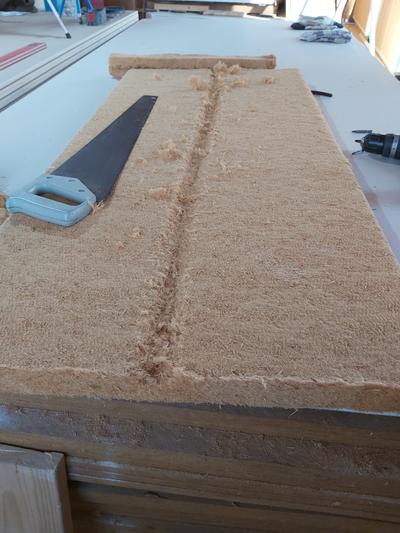 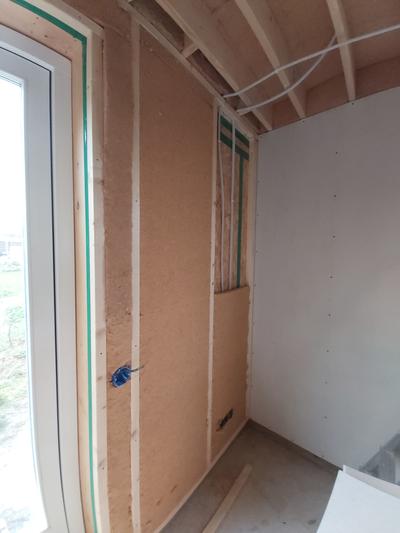 The southwest corner had two pipes for cables. The pipe for the data was thicker, so the gypsum plate would not fit nicely. It was a bit bulky. Took out the isolation and tried to make a groove for the extra thick pipe. The idea was good, but it did not work out so efficiently. There was a slight bulgy feeling to this plate. We cannot indulge in too much perfectionism, so that had to do. We continued putting up gypsum plates along the south wall hallway, and we installed three or four plates. 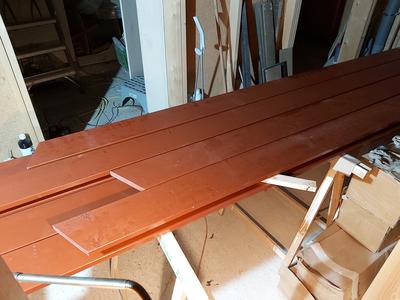 Before we went to our old home, we took the planks inside the new house to dry. They take up much space, so it is not pleasant having them there, but it is much better overnight than outside. 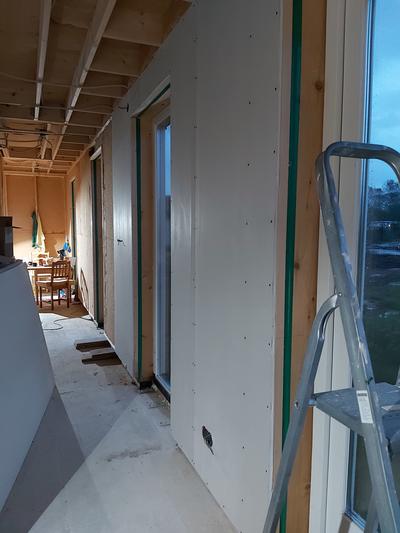 Today it was going to be dry until 1 PM. We arrived, and I put up the planks outside. They were dry and paintable. They finally got their second layer of paint. Then I left them to dry outside. Quarter to one, I started putting the dry planks in our container. When that was finished, it started raining. I was happy I had managed to give the planks the second layer.

Then we went inside to continue on our current indoor task of putting up gypsum plates.

We reached almost the end of the hallway along the south wall on the ground floor.

Here we came to an end of this week’s effort. We were pleased with the progress of the gypsum plates.