Making benches for the road association

This week we worked on benches for the road association. I practiced welding, but we start on Wednesday.

Today we received new photos from the builder Eigenwijsbouw, the stubborn builder.

The wood for the roof is also prepared for assembly. Next week I will receive the final installment of photos from the factory.

Tonight, I had a go at welding again. It is a bit of dragging and preparing before the workplace is organized in the garden. The goal for tonight was not only to create an arc but to make a weld, you could not break with bare hands. Last time I worked on the ground. This time I had set up the foldable workmate table. On top of that, I mounted my wise, and it held the workpiece. This way, the piece was located at a much better height.

When I was beginning setting up this, neighbors were still in their garden. I could hear them pop open a beer can. That was not going well with my plans because I wanted to be alone and able to concentrate on the work. Luckily, they were done soon after finishing the beer. The welding machine is mostly still, but when the arc starts, it is making some noise. I can imagine it can be annoying to listen to that an entire evening, so I was pleased that all neighbors went indoors.

All these little things can be shrugged off on the one hand, but on the other hand, at some point, these constraints have eaten into my creative mind. That is what I want to get released from in our future house.

I don’t want to have a pool of the neighbor’s dog right in front of my door every day.

The future workshop is not going to be big. It is a small workshop, but it is a workshop. I have never had that before. That will be absolutely fantastic. If I want to make noise there, then I am going to do that. Outside the workshop, there are many meters to the next house. 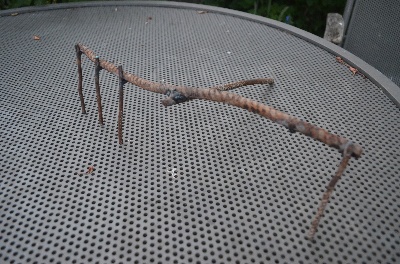 It does not look shiny at all. It is only the beginning of a rake. It had been nice if I had a pen that I could draw on metal. I have seen YouTubers have a white permanent marker that had been really useful for me. That would be nice to have. I will look out for those in the shop.

If I had had that pen, I would have distributed the spikes evenly. I actually did, but the pen I used was not visible, so that did not work out well.

Today it was a compulsory day off work. If you follow my blog, you know my stance on this matter. If I get something for free, I would like to use it the way I want it. Otherwise, it is not free. “Here is a free day, but you cannot use it on another day.” Then it is not free. In times of Corona, this is even more stupid. Here is a “free day,” and by the way: everybody else is also off work, and since you need to keep social distancing you must stay at home. Everyone going outside on the same day is the most inefficient way of staying away from each other. It is much better to go outdoors on different days.

Anyway, here was a compulsory day off work, it was the given moment to continue working on the NLDoet benches project.

A few houses away, children were playing in the garden. They had got a small temporary pool of one by one meter. It sounded friendly with playing children. They were not having any problems with me making noise. At one moment one of the children got hurt. He cried out loud.

Our electrician called us for questions about the installation. I see a pattern here, we had a meeting with him on the liberation day, and now we spoke with him on another compulsory day off work.

Not much happened today. I picked up the tires of the trailer during my lunch break. I also bought a steel brush and a white marker for my welding project.

In the evening, I wrote a poem.

I posted this to Twitter and got two likes! 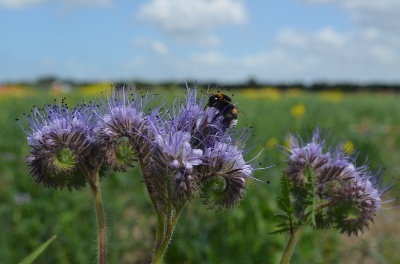 We went to the plot and gave the plants water, and we put on the new tires. That is nice, now we can load the carriage!

There are plenty of phacelia blooming right now, and the bees like these flowers. The apple trees are doing fine, but the sticks they show no signs of life.

Then we had planned to hike at the “mountain” of Almere, but it was closed due to Corona. That was disappointing. Instead of climbing the mountain, we went into the museum forest next to the hill. 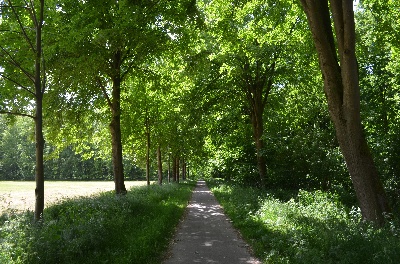 This is a beautiful part of Almere. This forest got little gems hiding. This time we found they are planting trees with hidden messages. Then the plan is to pick up the letter after one hundred years. We started talking about the future, and I am convinced the Netherlands does not exist in one hundred years. There will be sea here then. 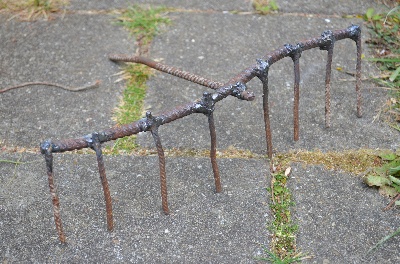 After the walk in the forest, we went home, and I continued practicing welding. It was windy, and I was working in the garden. I think that sometimes the wind disturbed the welding. I did not let this hinder me, I went on practicing. One good thing with the wind was that there were not so many neighbors out in their gardens. This metal is pieces of iron that I found along the dirt road of our plot. They are rusty and dirty. I do believe the steel brush helped a lot. With the steel brush, I could make the surface area to weld a lot cleaner, and that was good. 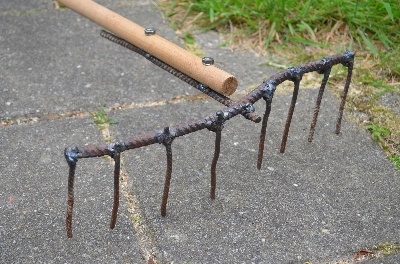 When the rake head was finished, kind of. I decided to put it on a wooden stem. Unfortunately, I only got shorter brush stems, but that had to do. I found two bolts of iron that I could weld on to the rake head. I drilled to holes in the stem, and then the rake with spikes was finished! My first stick welding project.

Today it was raining! We did not go to the plot, so I have not been able to check the rain gauge, I will do that will be tomorrow. We had a little slow start after an active day yesterday. Today I worked on the NLDoet project, the benches of the road association. The idea is that they will not become personal objects, it will be possible to borrow them. To emphasize this, they are engraved with the name of the association. Today I made that. I created an MDF template for my hand milling machine. It is the first time I make such a template for milling letters into something. 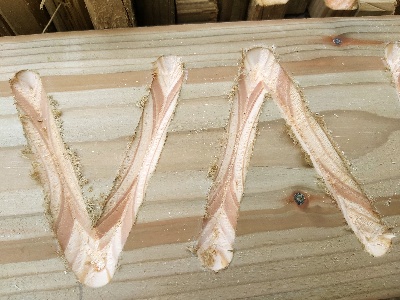 It went well. All things went like planned. There was especially one plank that grabbed my attention. It had a discolored ring in the wood. When I milled in it that produced symmetric patterns that looked really beautiful. The endmill I am using here has a v-shaped tip.

The idea is that the letters will be painted black for maximum contrast, so no one will see this pattern on the end product.

I milled these planks in the garden. Since it was overcast and no sun, there were no neighbors in the gardens. It will be wonderful to have a proper workshop where I can do things the way I like without disturbing others. I expect the new workshop to be useful already before the house is finished. For now, I think I maxed the quota of making noise in the garden. If I were to continue more like this, there would be complaints, and we do not want that. Luckily the NLDoet preparations are done now.

Next week the building of the foundation starts!