The Netherlands, or Holland as some mistakenly call this country, has large parts of the country below sea level. Especially the economic center of the country is below sea level. The Netherlands is a delta, and because if this much of the regulation and planning to keep the water where it should be has the word delta in it. There is for example the Delta commissioner (with staff). The delta commissioner issued a document last year 18 of September 2018 and shortly after he went with pension, good for him. I find this document very interesting.

You can find the document here: dp2019-b-rapport-deltares

It is in Dutch. Since I don’t think it will stay on the site forever, I decided to host a copy on my website as well, here.

Already the title is interesting Possible implications for the Delta program of faster increase in sea levels. In Dutch “Mogelijke gevolgen van versnelde zeespiegelstijging voor het Deltaprogramma”. It was the “Signal group” within the Delta program suggesting the creation of this report. There is thus a group to investigate new findings in the climate science research and signal these if it is to the interest of the protection of the Netherlands regarding water, water quality, etc.

Currently, the sea level increase is 2 mm per year. This is the KNMI’14 scenario. KNMI is the Royal Dutch Meteorological Institute. And KNMI’14 is the Dutch translation of the IPCC’13 report. Recent studies of the thaw rates of Antarctica are not included in this report.

That said, in general, this report is rather Antarctica centric. The things going on at the north pole and Greenland is not the focus of this report. At all. That is a surprise to me. Especially since Greenland is said to contribute 7 metres of sea level rise? 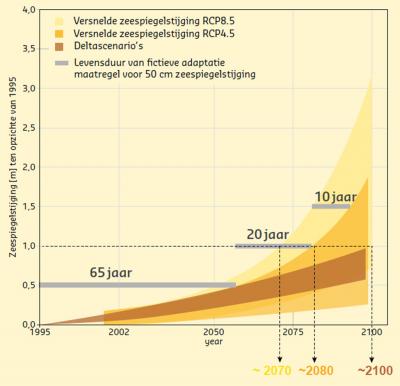 The report gives a picture of how various scenarios pan out. The grey bar indicates the lifespan of an adaptation. With a shallow increase in sea levels, the lifespan is much longer compared to when sea-levels are increasing much quicker. The report also refers to already established sea level rise scenarios called “Warm” and “Steam” but they supposedly below the levels talked about in this report.

The report starts with a couple of facts:

The first couple of pages are just vaguely alarmistic. It is essentially just a summary of the rest of the report. I think this is the part everybody are supposed to read. Here are the conclusions:

Then it is as if the report is leaving the safe territory and looks further into the future. The year 2050 is a crucial divider. It is as if before 2050 all is honky dory after that everything is a bit dodgier.

In the Netherlands, they indicate the sea level with the term N.A.P. (For more information about it look here: www.normaalamsterdamspeil.nl), and this is also the reference point for the European Vertical Reference System (EVRS)

When there is a storm, the coast gets damaged. It takes a while to restore the damage of a storm so the number of storms taking place per year is essential for how to repair the damage. It turns out that previous levels of one storm in 10 years reaching NAP plus 3 meters will in the future occur 5 times per year. This is not a linear change. This is more like exponential.

It will be necessary to investigate how the sand is brought back to the coast. The quantity of sand necessary is related to the sea level rise. It is said that the coast in front of the Netherlands is 4 thousand square kilometers. They multiply this area with the sea level rise to get a figure of how much sand is needed. This simple calculation is not taking the erosion into account. It will cost money to pump sand. A table is given for the costs. First column the sealevel increas in mm per year. The second is the necessary amount of million cubic meter of sand per year. The last column is the cost in million euros.

If this is not enough, the coast will get steeper so that the pumping rate needs to be increased on top of these costs.

When looking at costs, it is essential to put numbers into perspective. This report is not doing that. So I can do that for you. Here is information in Dutch about the Netherlands budget of 2019. 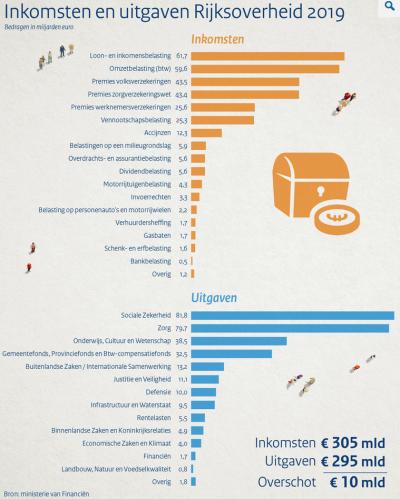 When you look at the budget, you can see that an extra annual cost of 1.2 million euros is not so much.

There are conflicts of interests as well. There are initiatives to build wind turbine parks in the sea. It will not be possible to take sand from these areas. It might be necessary to take the sand from deeper parts of the sea further away and that will increase the costs as well. When looking at the map the wind turbine parks look like VERY small dots on one hand and on the other hand the map in the report opens for that there will be more oil and gas.

How is it that in an alarm report about sea level rise you keep open for possible new oil and gas fields? Because you are stupid and greedy of course.

I have a much better idea: No more oil and gas fields.

There are special situations regarding the rivers Maas and Rijn. These rivers are flowing out in the see. At that location, there are also movable sea walls that can be erected during a storm.  The rivers can have high flow and if this coincides with a storm where the seawall is erected then where will the river water go? The report concludes that the storms will be more frequent but there is no correlation with high flows.

To me it feels like one saying, it will be bad, but it will not be systematically bad.

The report is talking about what will happen to the freshwater reserve. It will be bad due to that saltwater will push up from below. I have to say I read this section fast. What I notice though is that this part is talking about rising sea levels as a technical phenomenon. I think climate changes don’t come alone. Things are interrelated. What if the Jetstream normally coming from the southwest, the sea, is turning around 180 degrees and it dries up, much less rain as a result? That has a huge impact on the freshwater reserves. Cannot see any projection like that in this report.

In general Dutch people are very proud of their Rijkswaterstaat and Deltaworks. These huge massive constructions are impressive. The Dutch invention NAP is now the basis for the new European standard, even more, proudness. There are lots of things to be proud of.

On the other hand, this report is not pleasant to read. The language in this report is bureaucracy talk for describing a climate crisis but in such a way that you can misunderstand it as if things are honky dory, at least until 2050.

This reports refer to new releases of documents from IPCC coming out this year and next year. Perhaps they will shed more light on the situation? Every time there is a new research paper the situation is getting worse, not better. Why is that? Because the error bandwidth is decreasing the better the research becomes.