Leakage at the chimney is fixed

This week the leakage at the chimney was fixed by our woodstove specialist.

Last week we harvested fruit and made lemonade from some of it. That was great fun. My blogging has been a bit shaky lately. One week is full-throttle blogging, and the following week I am passive. That is why I skip the day-by-day format for this week.

We got some real rain this week. On Tuesday, 6 September, we got 17 millimeters, and on Thursday, 8 September, we got 9 millimeters. There has not been this much rain for several months. There are large cracks in the clay. I still think that the clay is remarkable, though, because between the cracks, there are large chunks that still hold moisture, and the grass can get to it. We hope we get rain from time to time for the rest of the year. That would be helpful.

DW has spent much time clearing the parts of the property where the sheep have been grazing. Countless wheelbarrows of thistles were brought to the compost, and the compost heap is growing taller and taller. The goal is to give the grass on our property an advantage against thistles and other weeds. DS also helped with this task, and that is great. He had a self-selected hiatus from helping on our property since early spring. We asked him to help, but he did not offer any help.

At the beginning of the week, I was feeling tired. It was not getting better that we did not have the discipline to get to bed on time. Tuesday evening, 6 September, we went to a meeting with the road association. This time there was sufficient quorum to make decisions. The decision was made that the road would be made of stones, not asphalt. I like that. 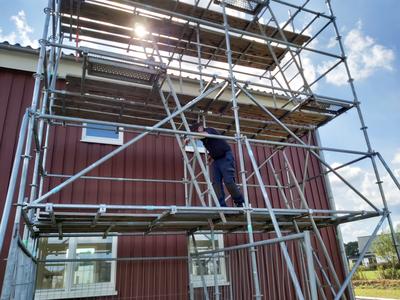 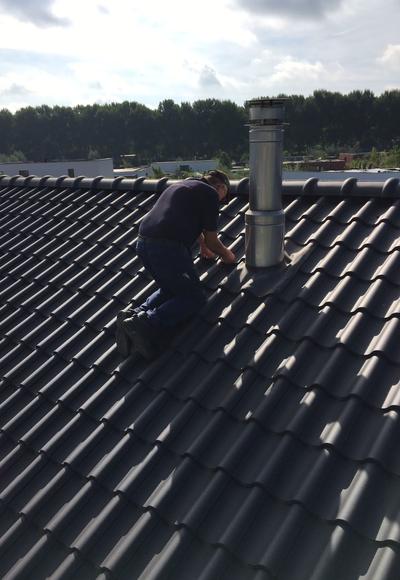 On Wednesday, 7 September, I wanted to continue the plaster project, but our woodstove specialist showed up and started fixing the leakage at the chimney. I built the scaffold for him on 19 March this year. He did not show up until now because he had to undergo a double-sided hip operation. It is an older man. Now he came to us; he was feeling fine. He climbed the ladders and fixed the problem with the leakage. 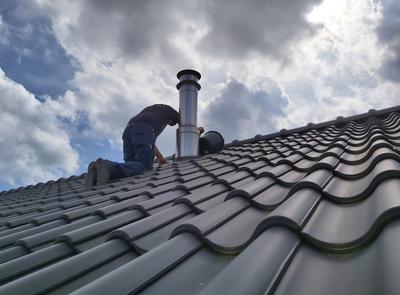 The tiles are held in place with stainless steel hooks. It is not possible to start removing tiles in the middle. The woodstove specialist unscrewed the ridge tiles. That way, he could dismantle the tiles from the top down to the chimney where the leakage was. The rubber cloth around the chimney caused the leakage. The cloth had a crease that was too deep. Now he straightened up the cloth and added extra support under it so it would stay in place. Then the tiles were put back again.

With this milestone done, I can dismantle the scaffold. 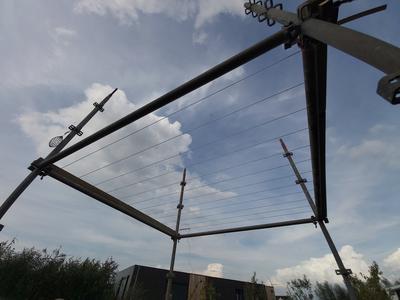 It did not feel right to start plastering while the chimney specialist was working at our house. It is hard to stop working when you have just mixed a bucket of plaster. Instead, I finished the dry rack project! I started on this on 25 August. It was starting to get dark when I decided to take a photo of the new drying rack.

On Thursday, 8 September, I harvested arugula from the bed sowed on 14 August. It became a simple arugula salad with a bit of loose leave lettuce. I love it. I usually work from home on Thursdays, but DW went to work to hold a course for her colleagues, so I decided to go to the office too. My colleagues at the office thought I came for them, but that was sweet enough. I made sure I spent time talking to people to learn to know them better.

This week I also planned for two future events. The first is that I arranged an appointment with the optician. I need new glasses. I think some things will be much more fun when I get better glasses. Secondly, we started to plan to go on a vacation to Sweden. Sometime in October. DS stays at home. The original idea was to go there by train, but it appears impossible to book the ticket. We tried to get a night train, but there is currently an issue with the night train between Hamburg and Alvesta. It is available on the train tables but not in the ticket booking systems. Not from The Dutch railway system, Deutsche Baan, or Swedish railway system. It might be that it will come later, but for now, that is the case.

An alternative would be to make a trip over the day to Sweden and go by Interrail. We have not tried that before so that it will be interesting. Now with the petrol prices, the train fairs are close to the petrol prices or even slightly cheaper.

One day we might have an electric car, but that is for later. I am looking forward to traveling to Sweden and being able to read a book. That sounds great to me.

On Friday, 9 September, I went to the office again. It was a special day because the company I work for went on a company outing. We went by bus to the village of Muiden. We switched to the boat that took us to the island of Pampus. On the way out from the harbor, we passed the castle of Muiden. I painted that castle almost exactly eleven years ago, in September 2011. Pampus is an artificial island made to defend Amsterdam. A guide presented the island's history, and then we got a tour of the inner parts of the fort. He ended his speech in one of the two canon rooms. The canon was dismantled during world war II, so now it was just a circular room. Colleagues had come from different countries, so many people were present.

After his presentation, we walked around the fort to discover the different rooms.

After the tour of the fort, we played games in the restaurant. Had it been dry weather, we would have played games outside, but it had started raining. I am not going to complain about the rain because we need it, but it was inconvenient that it came today.

Then we ate dinner, and after dinner, we went back home. That was it. It was fun to meet my colleagues in this setting. 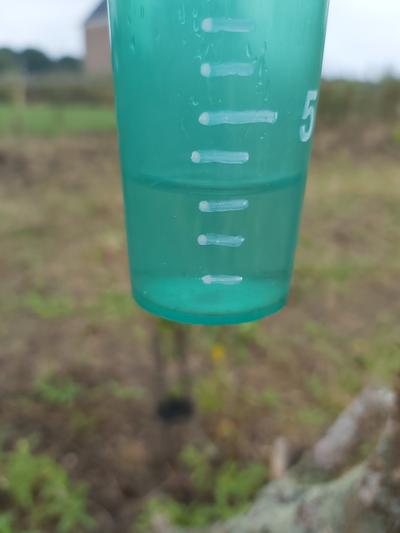 Saturday morning, 10 September, I was a bit slow. When I checked the rain gauge, it did not show that much rain—three and a half millimeters. The main task today was to finish the permanent fence along the road. The fence we are using here is fence elements that we cut in half. Then we drill holes through the poles and screw the parts onto wooden poles. 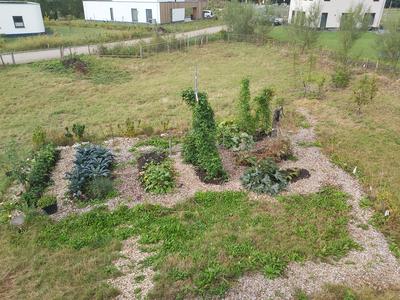 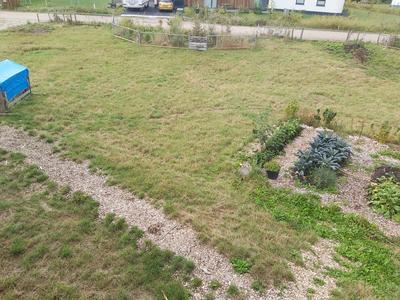 The permanent fence sections are inflexible, so it is not easy to surround some trees and leave others, but we made a compromise. Trees inside the fence get their sheep protection over the entire stretch of the road, that is, eight trees. We will not need to put out a temporary fence along the road. It will save us a lot of time when we move the sheep around. 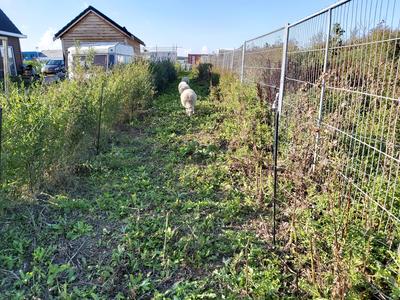 While working on the fence, our sheep got a bit loud. I took a break from the fence building and gave the sheep a new area to graze on between the property of the two northern neighbors. This action calmed down the sheep, and they started working on the task of eating the weed at this stretch. I could continue with the fence. I was lucky this was so easy to do. 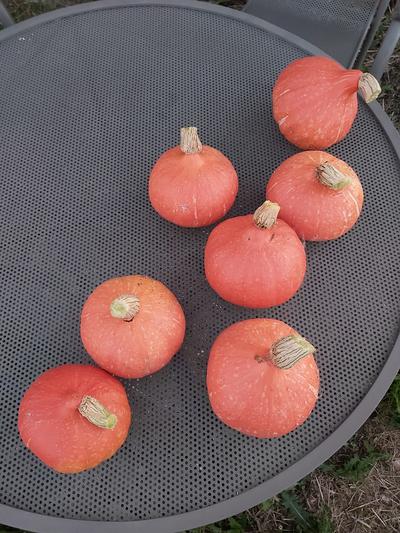 DW made preparations for a neighbor's event that would take place in a couple of weeks. She also harvested some of the pumpkins. There are more pumpkins to be harvested. In the evening, I was exhausted. We went to bed well on time. That is easier said than done, but it succeeded.

After a well-deserved long night's sleep, it was Sunday morning, 11 September. Today I wanted to set up more fixed fence sections along the driveway. I created four new sections the usual way. Cut the fence along the half and then screw loos dread ends together with wood beams.

The driveway is created with a mixture of rocks and coarse sand. It is tough to drill a hole in it. Ideally, you would put the pole outside the driveway, but now the driveway is a little too wide here and there. I had to drill where the rocks were, and it was tedious work. The drill gets stuck on large rocks, and then the drill can be removed. The rock has to be pulled out, and then you can continue drilling, but that is not for long because then you hit the next rock. It takes some time until you pass the layer of road filling. While working on the second hole this way, the ground drill developed a defect. It rotates while running stationary. That is dangerous with a ground drill. It needs to stop spinning while in stationery. I decided to stop working on the fence at that point.

From then on, we moved the sheep to a new area on the south side of the house. The sheep looked so cute at the new place. It was enough with two sections of the movable fence since we got so much permanent fencing along the road.

DW and DS put tremendous effort into clearing this area to prepare it for the sheep. That is visible in these photos.

Here ends the work at the new house for this week. The leakage at the chimney was fixed this week, and that has to be the main conclusion of this week. I am pleased with that outcome. 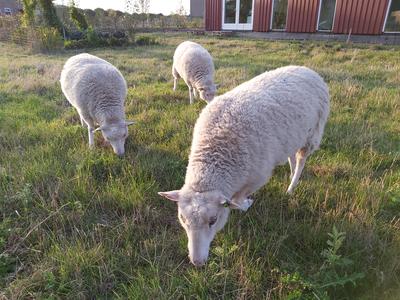 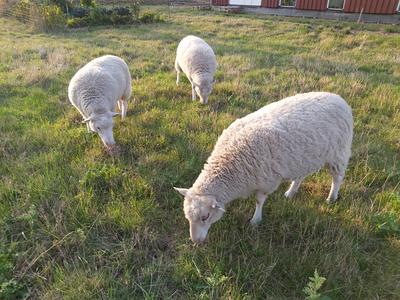 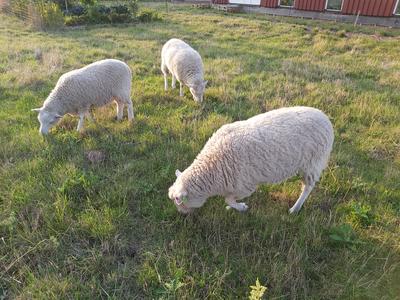 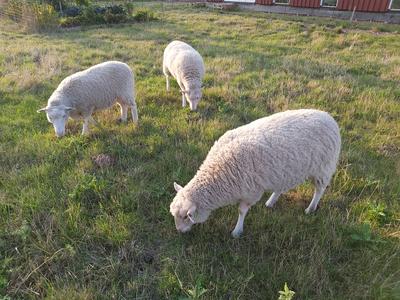 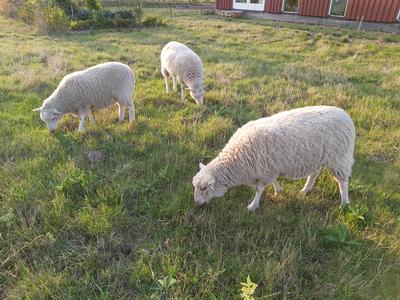 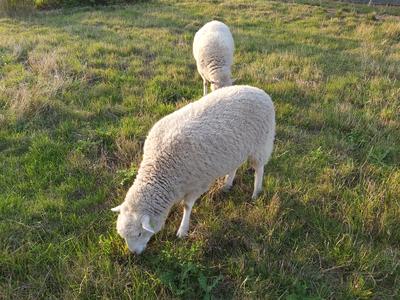 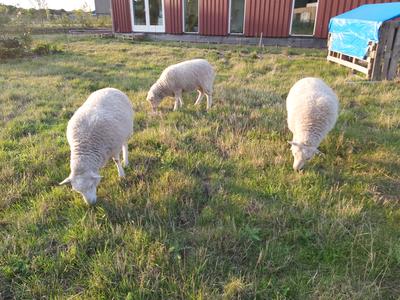 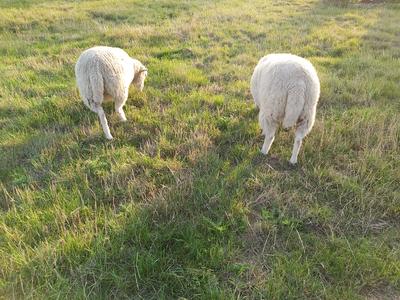 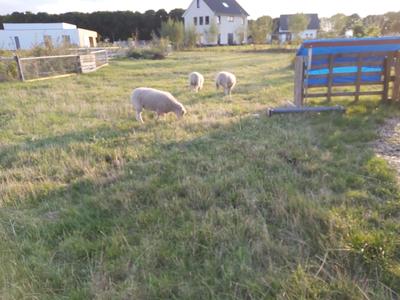 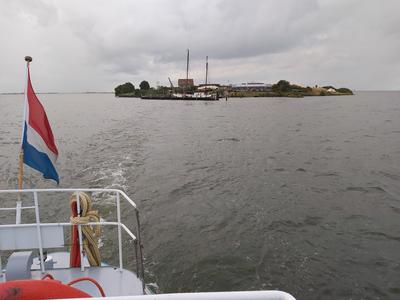