Our ventilation got balanced

This week our ventilation system got balanced. I continued plastering the kitchen. The lumbago situation of DW is improving a lot. 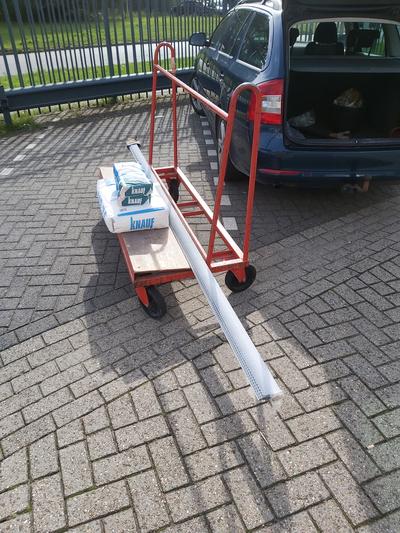 Today I worked from home, and during the lunch break, I went to the hardware store to get more supplies for plastering. I got 25 pieces of metal corner rods, one bag of 25 kilograms of MP75, and two bags of TopFinish. Now I can continue to plaster for some time. 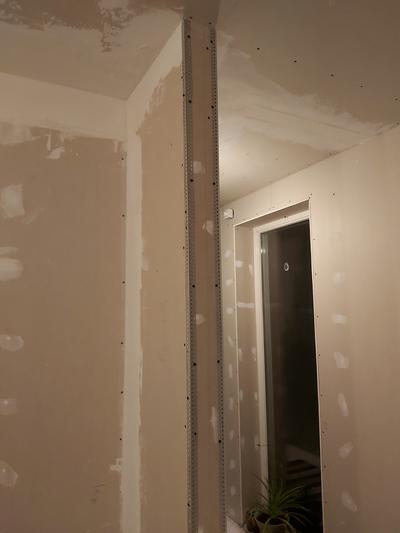 The sheep had already eaten the area between the northern neighbors. We went to look at what it looked like, and one of our northern neighbors suggested our sheep could eat a little more on the northeast corner of his property. I changed the nets to make this happen. The sheep started munching on the new area. 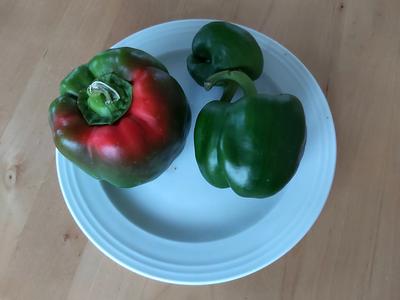 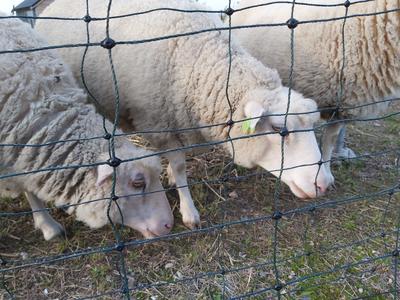 The sheep were already done with their current area and the extra patch they got yesterday evening, so instead of plastering, I started to move their nets. Now they got an area on the east side of our property. This part of the property has insufficient maintenance, so many thistles still exist here. I got them contained at the rain roof, then moved other nets around them to create the new area. There was still a little bit behind the container that they could not get to, but that will be for another day.

When I came home from work after lunch, I was eager to get going on plastering. I finished applying corner rods at the window adjacent to the kitchen. Then I applied course mud. I finished plastering the course mud apart from two minor details, on the small wall between the kitchen and the hall at the ceiling and along the south wall window.

It was windy today. As the wind picked up, I was worried that the rain roof experiment would soon be over, that it would be torn and fluttering in the wind. I found that one corner of the tarp had been torn off in the evening. I decided to repair it by sandwiching the corner between two pieces of thin wood. It was challenging to mount this gadget on the tarp in the dark with the wind roaring around me. I was especially keen on not being smacked by construction while it was still not fastened. I got it working, though! It became a triangle with four bolts, and then I could tie the wood to the scaffold again. I will look at the other corners as well. Perhaps already this weekend.

DW worked at the office again. Here lumbago is getting better and better, but it is not over. I brought her to the train station early in the morning. Then I went to my office and worked from there.

This evening after work, it was calm, beautiful weather. I decided to expand the grazing area for the sheep so they could eat the remaining part behind the container. There are a lot of thistles there. Now they had so that they could graze tomorrow Friday, but then we will see what we will be doing because the grass is not growing so much. The area in front of the house is ready to be grazed again; the last time they grazed here was on 11 September. We will probably move them there on Saturday. 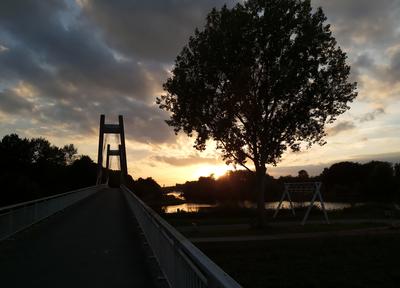 Today I worked from the office again. DW worked from home. I biked to the office for a change. On the way home, I stopped at a canal to take a photo of the view. It is beautiful here.

Our ventilation specialist came and finished the ventilation. There are now sensors detecting the air quality and directing air to the part of the house needing it.

The airflow got measured and balanced, a significant milestone in the house-building project. An outstanding feature of the system is that it is silent. You could hear the ventilation in our previous home, but it is barely noticeable here. There are several reasons for this:

It was lovely weather today. In the morning, we talked about what to do. I suggested we go to a hardware store to get the nuts and bolts to reinforce the rain roof's tarp corners. Those bolts are easy to find.

The sheep nets are attached with a wing bolt and wingnut combination; bit by bit, we lost these while working with the nets. We need more wing nuts for our temporary sheep nets, but they are difficult to find in the hardware stores in the city. DW suggested looking at an Internet shop; sure enough, the wingnuts could be ordered online. So instead of going to a hardware store to buy the nuts and bolts, we ordered them online.

I also needed double-sided tape and two thin multiplex plates to enforce enforcement of the rain roof, so we went to the city anyway.

While at it, we went fun shopping at two second-hand shops. We found a book about pruning shrubs and trees in the garden. There were a couple of things I almost bought, like a camping table without feet. It was essentially a wooden box with a hinge that formed the table top when opened, and then inside, there were supposed to lie four loose feet that you could mount in the four corners of the table. I had to manufacture the four legs, and the table had been ready to use. The thing is that when I can manufacture the legs, I am also capable of manufacturing the rest of the table, and I think I made it lighter.

On the way home, we did our weekly grocery shopping, and then, it was time to plaster again. Well, not exactly; we ate lunch, and somehow I was already exhausted, so I crashed on the couch for a while. 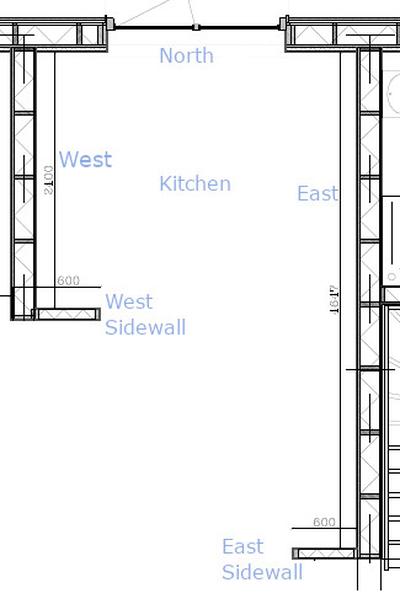 Then it was time to plaster again. It was lovely. It was time to start with the TopFinish layer. I decided to start from the south side of the west sidewall and work counterclockwise. Outer corners are fine because you can continue with the next wall. For inner corners, it is better to let one side dry and then continue with the adjacent wall when the first part of the corner is dry. 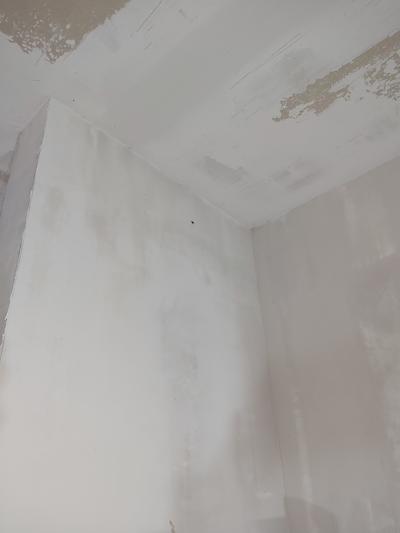 I had a guy that came and stayed with me. Perhaps you can see him in the photo? I blew on him to have him fall. Then I plastered my part. Sure enough, he came crawling back. He was persistent; this was his place and not mine. After doing the west sidewall, I continued to work on the north wall. Then I did a little bit on the west wall. 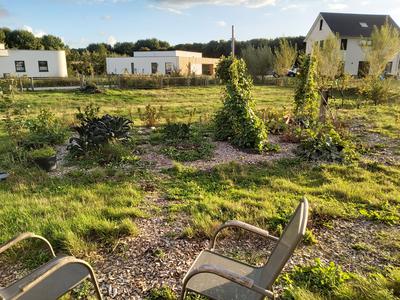 The sheep were hungry, so I gave them hay. Tomorrow I will move them to the south side of the house. It was a lovely evening. It was tempting to start working on the sheep fence. Our runner beans show no signs of giving up! They still look gorgeous. 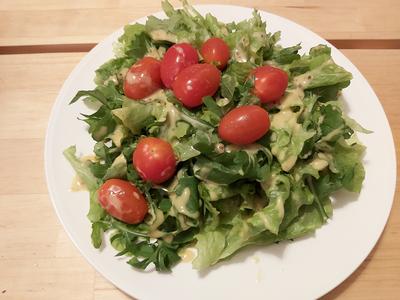 In the evening we had pizza. I made the arugula and loose-leaf salad melange from the salad bed. If you had told me a couple of years ago that I would harvest salad in October, I would not believe you. 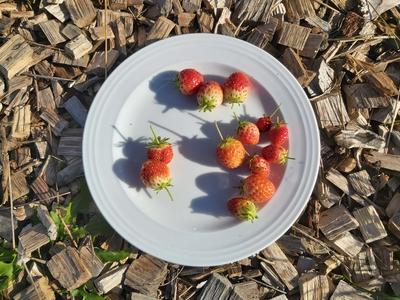 This morning, I collected strawberries to eat with breakfast! As long as there is no freezing, these strawberry plants will continue to produce strawberries. 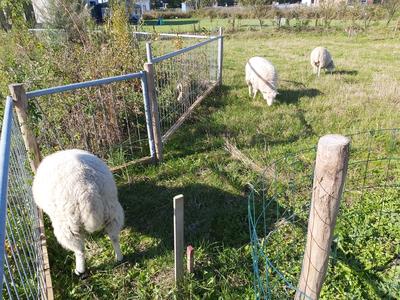 The first thing we did today was to move the sheep. Well, I moved the sheep. I arranged one net so that it extended the fence along the driveway.

We still need to set up a permanent fence along the driveway, but I extended it with a temporary net for now. I put up the net so that when it reached the end of the grass, I took a turn and let the fence cross the driveway to reach the other nets at the sea container. This way, it will not be possible for the sheep to walk out on the road when we move them to the area in front of the house.

Then I set up another net along the west side of the property, starting at the permanent fence on the southwest corner of the property. I let the second net pass the apple trees and the vegetable garden and reach the house.

Then I created a path for the sheep so they could only go to the new fence area. The bike, the car, the garden chairs, and some scaffold parts stood there to discourage the sheep from wandering in the wrong direction. It worked very well. When the ladies reached the new area, I closed it with the driveway net. Had it not worked so well, the sheep had not have been able to walk so far because the old fence was still standing. They had reached the salad beds, probably where the most damage had been. Well, no worries, it worked very well.

When this was done, I plastered walls in the kitchen. I applied a second layer to the west sidewall. Then I continued with the north wall. I did half of that wall. 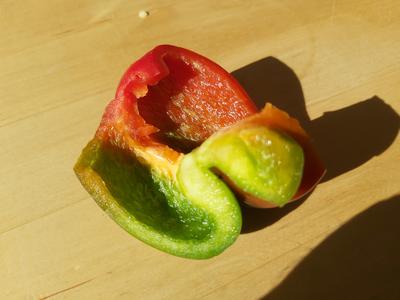 The bell pepper had started to crumble slightly. I suggested to DW that we cut and eat from it instead of watching it get bad. It had a nice dark red color as well as green parts. It tasted well. If we had a glass house, it had probably have been easier to grow bell pepper. 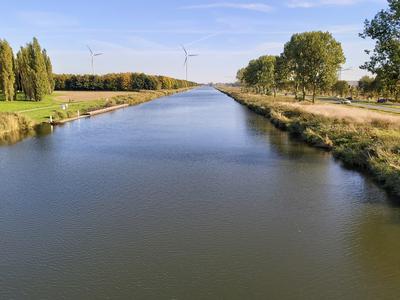 It was such epic autumn weather today. I suggested to DW that we have a bike tour in the neighborhood. Her lumbago is getting better and better. She liked the idea! I wanted to see how it is biking across a new bike bridge built across a canal enclosing our area. It was beautiful, indeed. 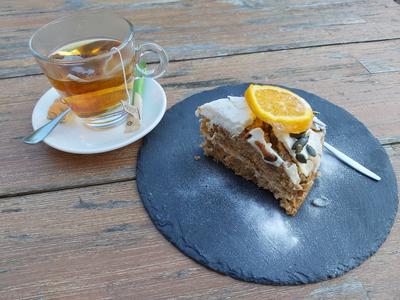 It is not that beautiful on the other side of the canal. There are big warehouses, and for the rest not much to see. People were driving motorbikes and making an awful noise. We turned around and returned to the beautiful, peaceful part. We found a restaurant and cafeteria in the forest, it was open, and we decided to get ourselves a cup of tea. For the tea, we ordered a carrot cake. It was not some tiny pieces; these were hefty chunks. When we returned from our bike tour, it was time for dinner, but we were not hungry. Instead, we continued on the carrot theme and had carrots for snacks.

For DW, the bike tour was not bad at all. Her back needs movement to stay smooth, so this was a good exercise. She has gradually become better in her back in the last week. Sometimes she gets a needle sting, but gradually she gets more movement in her back.

Here ends this week's blog. Next week we will probably start feeding the sheep with hay. Then the winter season started. That means we will need to buy some hay to put in our container. More about that later. This week I continued plastering, and that feels good. Our ventilation has been balanced, so that part is finished. The goal now is to stay healthy and keep on plastering. 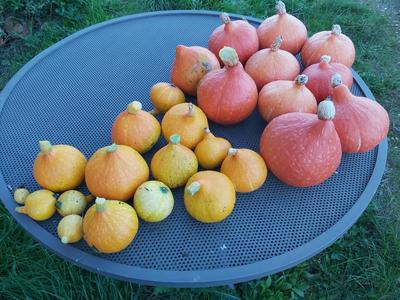