Kitchenpreparations from Monday 14 until 20 November 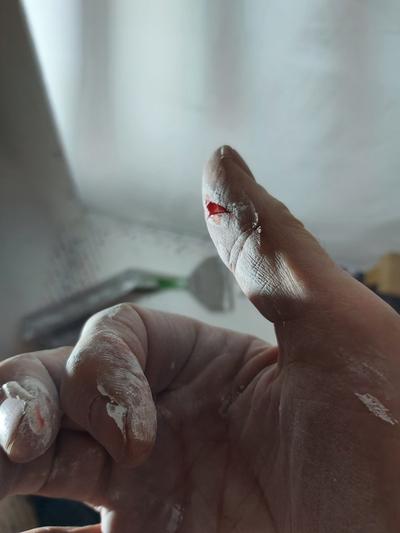 This week from Monday to Thursday, was like work, plaster, sleep, repeat. I had no time to write on the blog; it was awful. Whenever I had spare time, I watched Steven He's youtube movies. I did not know there was a genre of how kids of Asian parents are treated. Now I know, and I am left with emotional damage.

While plastering, I listened a lot to music from youtube since I have a costly subscription. Not just any music but my latest playlist, Jens Banging House music. I made this playlist myself, so it is excellent. Today I even tried to play it in the car, but I found out that the BlueTooth version in my Amundsen car stereo is incapable of streaming music. At least with my current version of the telephone. That is so strange because I recall that I could do it yesteryear. This new realization of how my car's stereo sucks almost left me with emotional damage.

Since my spirit is strong and I, as a kid, was taught to walk to school in three dimensions while fighting bears through one meter of snow, I came up with the idea to download the music from youtube. You know that is virtually impossible, but not for me. I downloaded Audacity. Make it record what is played on the computer. Then I found all the silent places in the recording and exported the clips in between the recordings. Now I have the MP3 files on an SD card to be used in my car. Now I am feeling good; only the people on YouTube are left with emotional damage. Not my problem.

Talking of damage, already Monday evening, I cut my thumb on the plaster trowel. I started bleeding, and it hurt a lot. I took a photo of my thumb, which looked really cool. Later throughout the week, the hurt thumb was not feeling that bad. 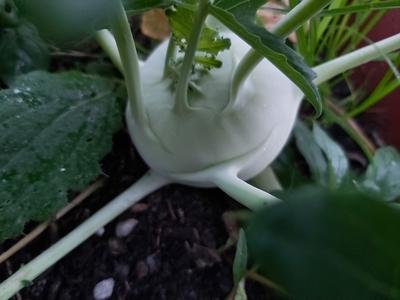 It is still mild weather, and it has been like that while we were in Sweden for the previous two weeks. The upcoming weekend will be cold, but that is the first cold weather this year, which is not normal. The kohlrabi is still growing, plus some of the other vegetables. Incredible. We will see how long they will last.

I managed to plaster every day from Monday to Friday. It was tiring. We had agreed that DW would paint over the weekend, so it had to be finished on Friday evening, and it was.

Friday morning, when I woke up, the sheep had escaped. They were happily grazing from the front garden. When I came out, I brought a bucket of food supplements, and they came to me like they had some news to tell: The fence has fallen down, and we don't know what to do! I walked them back to the hey holder and gave them the supplements, and while they were happily munching on that, I restored the fence. When DS went to work at 6AM, he saw the sheep in front of the house but thought they were supposed to be there and did not alarm us. From that, I must conclude they are sweet ladies, not so much into escapism.

I tried the car's SD card on Friday morning, and it turned out it cannot handle 64 Gb SD cards. In the evening, I found an 8 GB card that was accepted by the car. I don't feel that 64 Gb is that special, but 64 Gb was an unimaginable amount of storage data back in 2013. I think the car is from 2013. It is nice the car can use an old small card, then it is in use. Perhaps it will not be long until we have a new car, but I am not sure when we will buy it. Right now, we got other priorities. 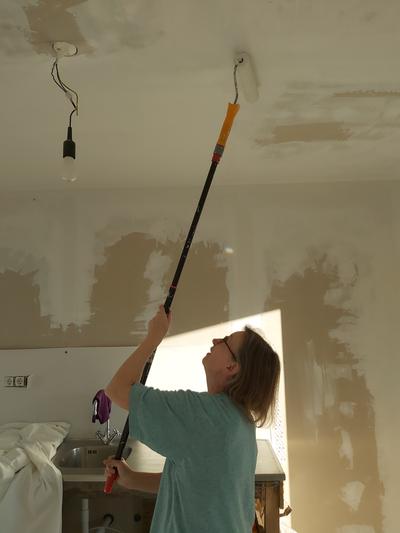 Saturday, DW started to paint the kitchen area. She had one bucket of Auro paint. She felt it would be challenging to paint the whole kitchen with that bucket. Actually, it would be necessary with one and a half buckets. 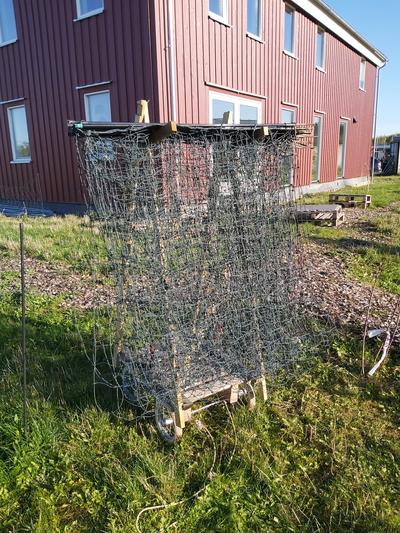 The front garden grass has grown so that it is possible to let the sheep graze there. I decided to collect the vacant fences and repurpose them so the girls could grace near the road in front of the house. I used my fence collection rack for this. Because we got the permanent fence along the road, I could give them an extensive extra area without much effort.

The sheep became really happy. They even jumped around a little. It takes a surprising amount of time to change the fence. We need to put up more permanent fences, that is clear.

We expect freezing temperatures in the Netherlands, so I collected our garden hoses. I took off all couplings and handles and made lovely bundles that I tied together. 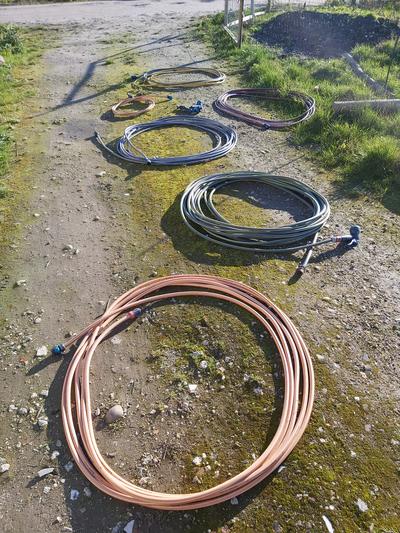 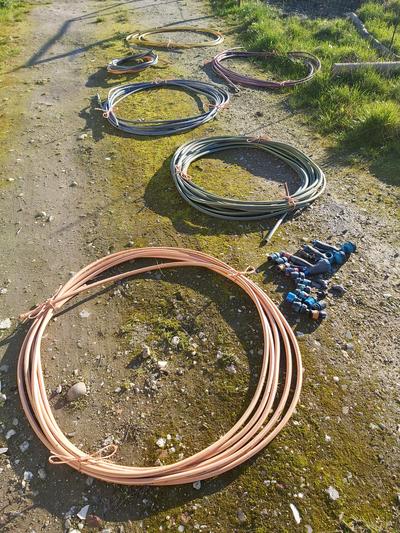 Then I went to the hardware store to get more nuts and bolts for the rain roof. I abandoned stainless steel for now; it became zinked bolts, nuts, and rings. 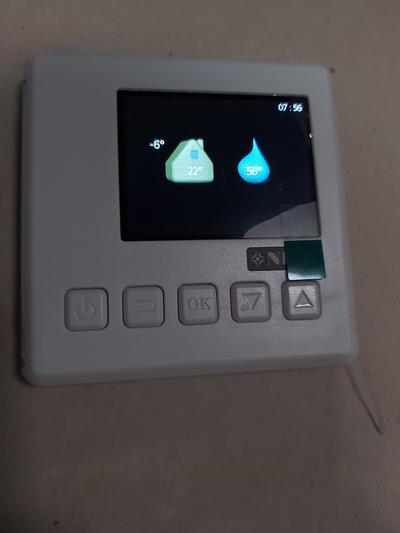 Sunday morning, it was -6 degrees celsius (21.2 F). We were really slow this morning. I sat in bed working on the search functionality of the blog. I could not find words I knew were available. "Auro," for example. I fixed it, and it works now; you can search for words in the blog! 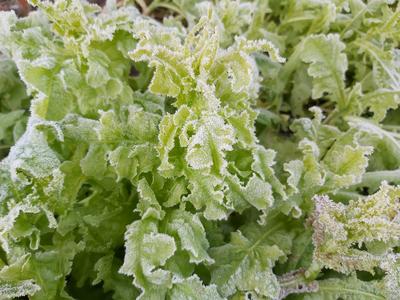 The winter salad was sealed in frosty ice crystals this morning. I am curious if it can handle it. All common sense tells me that now the salad should be game over. We will see.

DW started painting the kitchen area, the second and final layer. She realized that she had not applied the primer yesterday. That was why the paint seemed to vanish quicker than she was used to. The idea of the primer is to provide a cheaper and more efficient layer that will seal the background and form a foundation for the actual paint. In general, the primer is often the glue part of the paint without any pigment. Now that the primer layer was forgotten, we had to deal with it, meaning just another layer of regular paint. At first, she was hesitant that the available paint would suffice, so she painted the priority areas first. Then gradually, she painted more and more of the areas from yesterday, and at the end of the day, she had painted all areas.

My first task for today was to clean the chimney. 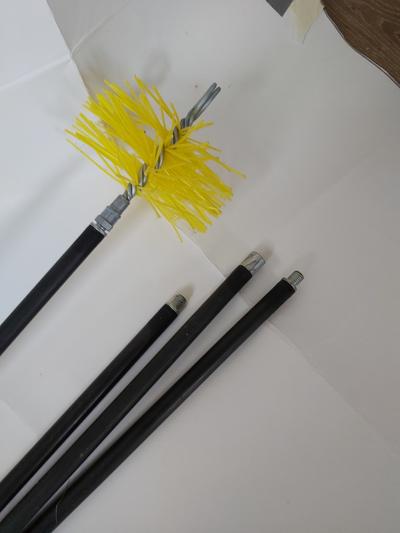 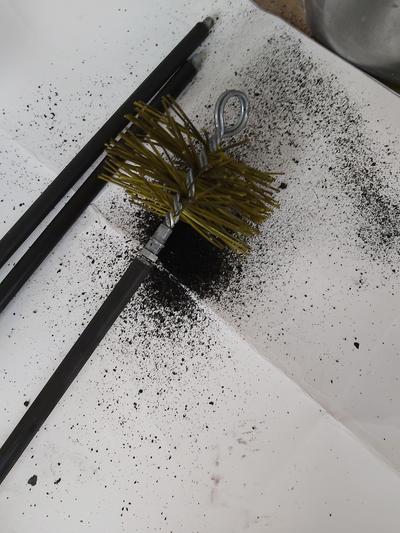 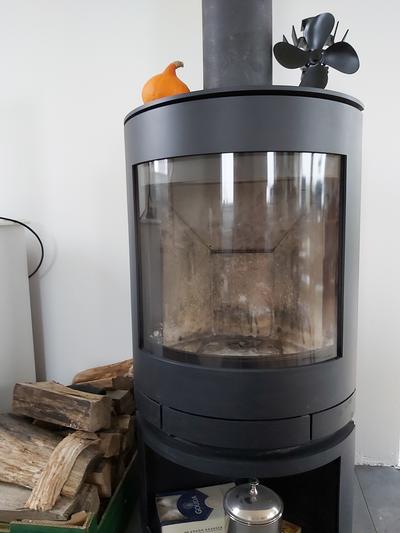 It was a dirty task, yuck. We got a hatch in the chimney on the first floor, giving access to the pipe. The cleaning rod comes in sections that you screw together one after another. I had to bend the sections to make it possible to get one section onto the next; it would have been easier if the hatch was just 20 centimeters higher. I used all four sections to reach the top. Then I retracted the rod and unscrewed each section one by one. Then it was time to clean the bottom half of the chimney. For that part, it was enough with three sections. The challenge with the bottom part was that when I retracted the rod, it brought with it the entire chimney. Since DW was busy painting, I asked DS if he could help me hold down the chimney. That worked fine; the rod could clean the chimney properly.

Now came the second leg of this task: collect the stuff. I read the instructions for the wood stove, and they claimed it would be possible to remove the upper part of the stove's interior to get access to the end of the chimney, but that was seriously not possible. I don't know what they mean by that. I could lift the chimney, but that is not at all easy. There is a hatch at the back of the wood stove, and I tried to open it. I don't think it was supposed to be opened, but now I have done it. There was a gasket that I ruined in the process. The hatch gave me good access to the upper part of the stove, so that was fine, but I am not pleased with the idea that the gasket was lost. I think the stove is tight enough without a gasket, but if that is not the case, I will order a new one. Let's say this: I am left with questions on how to do this better next time. If we get smoke problems without a gasket, I know that is not how to do it.

The good thing is that now we are ready to use the wood stove. 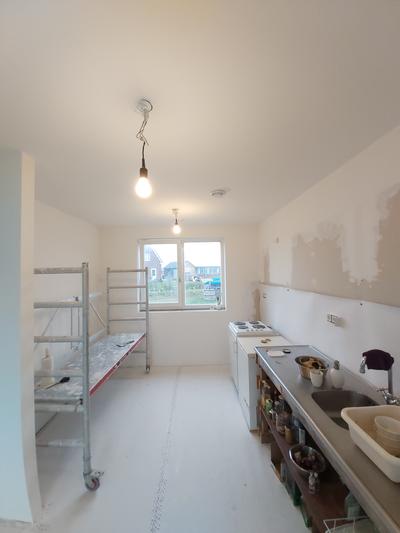 When I was ready with the woodstove and the chimney, DW had finished painting the kitchen. 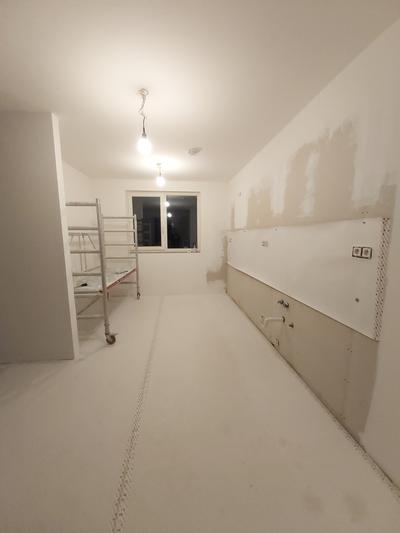 We decided to do no more in the kitchen until after supper in the evening. After supper, the fridge and the freezer had to move elsewhere in the living room. Now we have boxes stacked, a fridge, and a freezer. The living room is getting more and more stuff right now. 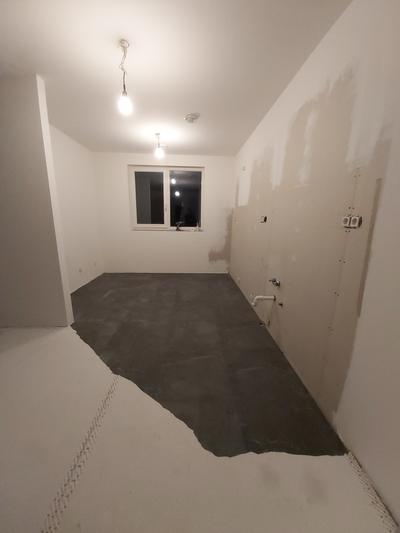 It was a pleasure, though, to prepare for the carpenter tomorrow. I removed the protective paper where the carpenter will work tomorrow. DW suggested I will do this tomorrow, but it doesn't feel right. I don't want him to wait for me to prepare the place where he will put up the new kitchen. Besides, it is unclear how long I need to clear the area beforehand. It went pretty quickly, though.

That is the state of the house-building project this week. We are excited to get the kitchen installed.

Do you know one thing I forgot? I have not rescued the rain gauge from the freezing temperature. I will have a look at that tomorrow.

Thank you for reading this blog. I really love seeing that you like to read this blog. Many of you are coming back week after week to check up on the progress. That is highly appreciated! 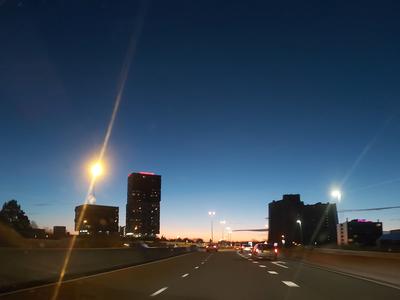