This week we decided on the material for the kitchen benchtop

This Monday, I worked from home. I was coughing and sneezing, and so was DW. I did not check for Covid because DS had tested negative last week on Wednesday before going to the dentist, and I was pretty sure DW and I had it from DS. 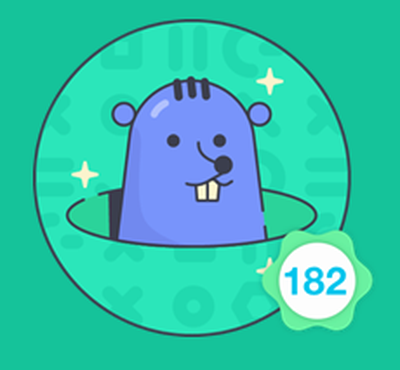 Today Grammarly gave me a new badge! It was the 182 weeks of continuous writing streek batch. The first blog in this writing streak should be from 21 April 2019. That is one year before the pandemic. I do think that the goals for writing are still valid. It is great fun to write this blog. The badge is the Holy Moly. Well, I am not fond of moles, but okay. It is sweet.

Today we got a visitor at the scaffold of the rain roof! It was a common kestrel, undoubtedly an honorable visit. In Latin, they are called Falco tinnunculus. It was windy, so the kestrel had to hold on to the scaffold. Several times the wind almost blew the kestrel off the pipe.

The slide's last image shows the kestrel flying away with the mouse in his claws. Great catch!

In the evening, I plastered the last part of the kitchen's north wall, including the window. It still gives me a feeling of victory that I am working on the house after regular work. Not to forget that I got a common cold as well.

At first, I had the idea that I should go to work as usual. I did a corona self-test, and it was negative. I was not feeling happy with the idea of going to work sniffing and coughing, and not only that, when talking, I could suddenly lose my regular voice and produce a high-pitched voice. It was also hurting a bit. I decided to work from home. There was no issue with my productivity for the rest, so I could just as well work from home. My colleagues were happy with my decision to stay home.

This was not a special day for the rest. In the evening, I continued producing music. I am also blogging about music production, but that will be a separate blog. It could be that I never publish it, depending on how well it goes. Let us hope it progresses nicely. 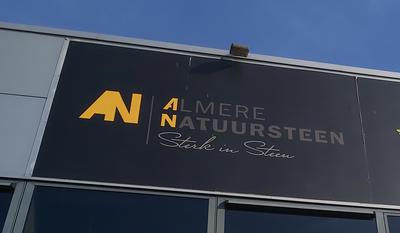 Today I worked half day from home. We were feeling much better now. That was good because we went to the local stone masonry to select the kitchen bench top after lunch. We met up with the carpenter at the workshop and got three samples with us to have a look at home. The sink will be 55 cm wide in stainless steel with a radius of 10 millimeters and a narrow top edge. We also decided on a vertical edge at the back side of the workbench. Putting tiles on the wall above the bench with the back edge will be easier. Since the carpenter wanted to measure a couple more things, we drove home behind his bus. 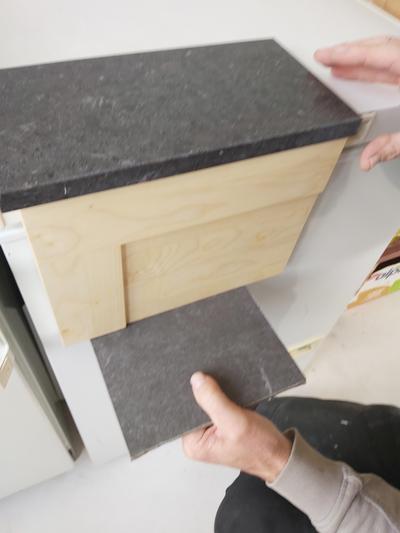 The carpenter held up the different alternatives. On top of the workbench, then the sample of the cupboard, and at the bottom, a floor tile. The photo of the combination we decided on became blurry. All the others were sharp. That is so typical. I publish it here anyway because it reminds me of what it looked like. You can see virtually no difference between the tabletop and the floor. The table top is polished, though.

We also discussed the width of the bench on the west side. It became narrower so the freezer and the fridge would fit properly. 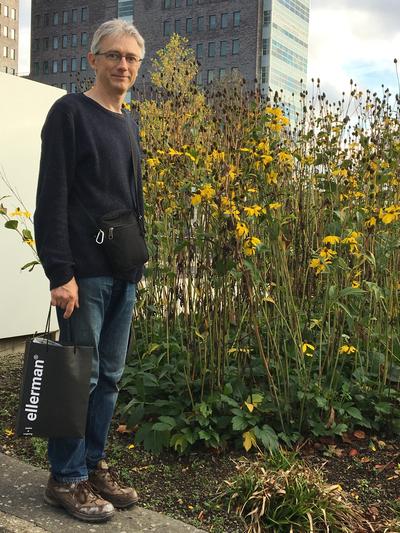 When the carpenter left, we went to the city center to pick up my new glasses. It went much quicker this time. That was not so exciting in itself. The glasses were doing what they were supposed to do. What was interesting was the plants at the train station. They were beautiful and had seed buds ready to be picked. I am, standing on the edge of the park where I can reach the plants. I picked a couple of buds from this plant. Next season I will try to grow these plants from these seeds. There was also a shorter version of the flower, and we took seeds from that as well. 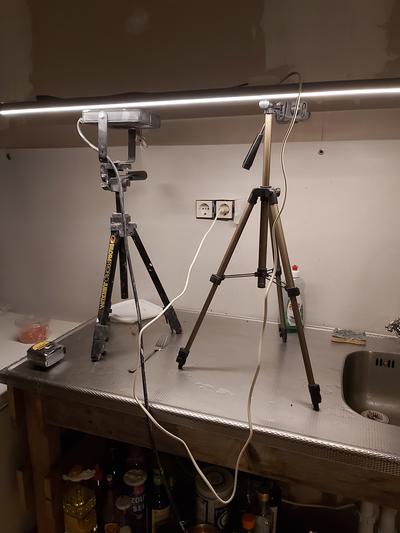 We rigged up the carpenter's light test plank in the evening to test it. We were sure we did not want a dimmed light in the kitchen. It is a little challenging to select the light intensity when you have one chance to do it right. DW was happy with the light, and I thought I would like to have it a little more intense. In the worst case, we have to replace the strips with more intense strips, which is possible. I even think we can do that ourselves.

It was a beautiful sky this morning. Fluffy little illuminated clouds.

During the day, the sky was not that spectacular.

Last working day before the holiday next week. I felt I could round off my office tasks nicely in time. That is much better than stressing to the end. 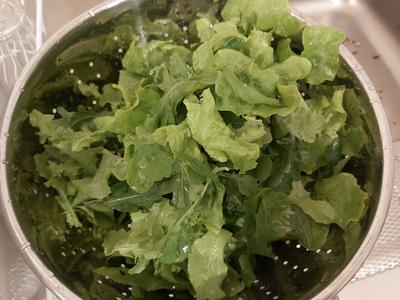 After work, I packed my bags and harvested salad that we could eat together with our pizzas as we usually do on Friday evenings. DD came home late. We sat and talked for a long time, so it was late when we went to bed.

DD and I repaired her glasses. She had been sitting on her glasses, so they were slightly bent. No worries, the glasses were bent back to good shape.

Today we are traveling to our farm in Sweden. We had decided to wake up at 05:00 AM, but the alarm clock did not go off. We got woken up by DS, luckily.

It is DW, DD, and me going to Sweden. DS stays at home and looks after the sheep.

DW drove the first part from the Netherlands to Germany. It was bizarre because I thought at the beginning of the trip that I had forgotten my hat and sunglasses. Driving a car in sunny situations without a hat and sunglasses is challenging, so I was slightly annoyed. This annoyance slowly faded out in mourning. I even started playing with the idea of buying new sunglasses and a hat. DW was driving, so I did not need the sunglasses and hat at that moment anyway.

DD and I slept while DW drove. Later she told us that she had taken a detour, but we did not notice anything of this.

When we came to Germany, I drove. It was misty this morning. There are different road cultures in different countries, and I think people take a little more responsibility on German roads than in The Netherlands. This was a free-speed section of the motorway. That means that you can decide what speed you would like to go. I tempered my speed, and so did all drivers around me. That had not happened in the Netherlands. The mist dissolved later in the morning.

We had been driving for hours in Germany when DD found my hat and sunglasses in the backseat. I was so happy. We had to fill up the tank and switch drivers before the ferry. It was DDs turn to drive. 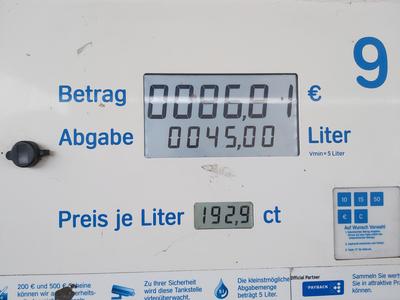 Our current car runs on petrol. When we bought the car, we were not aware of what CO2 is doing to the climate. Time has changed, we know it is not good to use petrol. We are researching what kind of vehicle we would like to have, and as usual, there are many choices to make. You can spend the money only once, so our decision has to suit us the best for many years to come. 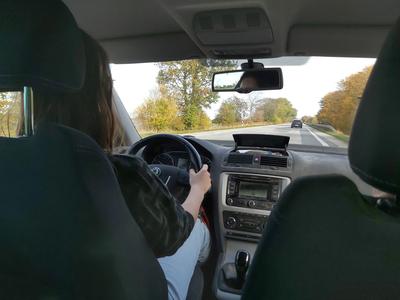 I write this at the back of the car while DD is driving. It is the first time I can blog while we are driving. We will see how long I can do this without becoming sick. I can write with ten fingers without looking at the keyboard, so I can look out of the window and type simultaneously. I think it can work pretty well. I have my telephone set to a mobile hotspot, so I can even do spellchecking with Grammarly. It was feeling great to be able to relax while someone else was driving. 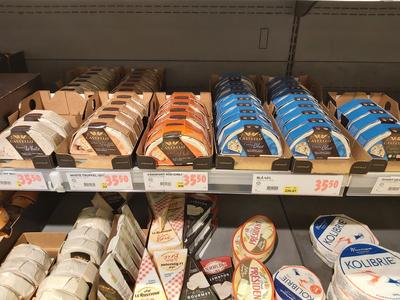 When we came to Värnamo, we stopped at a grocery store. It is huge. Among other things, I wanted to have some Castello blue cheese. In the Netherlands, you can choose from one sort. Not here. Here they had six different sorts of Castello cheese. I have never seen that in the Netherlands.

When we came to the cottage, we were tired. That did not stop us from having a cup of tea and crisps with Castello blue cheese.

I slept well, although I rested in the car twice yesterday. It is hard work to drive, so it is no wonder I was tired. In the morning, I sat blogging in bed with a cup o tea. I caught up to do with blogging.

After a slow morning, we went to Dravö Natura 2000 area for a walk. We parked on the Fridsnäs side of the area and walked along the dyke. Fish got excited or scared and jumped out of the water when we came walking on the dyke. There were benches at two places, so we could sit and rest. While sitting, we could enjoy the view of the windmills. We walked to the other side and onto the lookout point. There was a gathering with people grilling on the other side, and they greeted us. At the lookout point, a tree waved to us. On the way back to the car, we walked along the dyke again, and this time we found bright orange mushrooms. Near the tower, I photographed the lively water at a dam. It was fun to climb the tower. A house at the top of the tower had bugs that wanted to get out. We helped the bugs to escape.

During the walk, we came across a tree happily waving to us. We waved back. 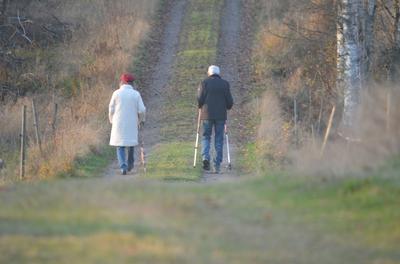 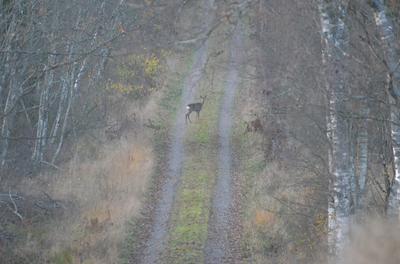 In the later afternoon, different visitors came walking on our roads. Humans (Homo Sapiens) walked along the road, and roedeer (Capreolus capreolus) crossed the road. The roedeer kept an eye on us to see if we were trustworthy.

Here ends this week's blog. From a house-building perspective, the essential part of this week was visiting the stone masonry workshop and selecting the kitchen bench top and the light. The carpenter now got all the details he needs to start working on the kitchen. When we are back in the Netherlands, we will need to finish the preparations on our side. 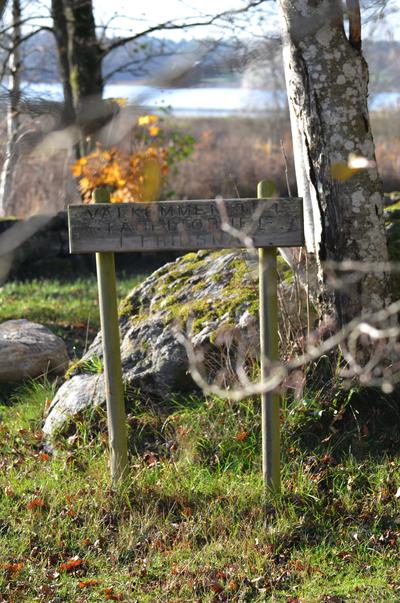 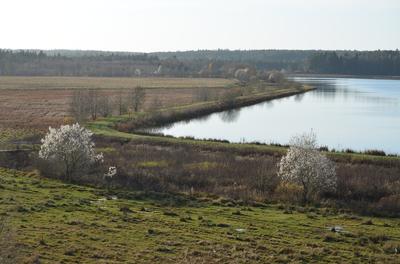 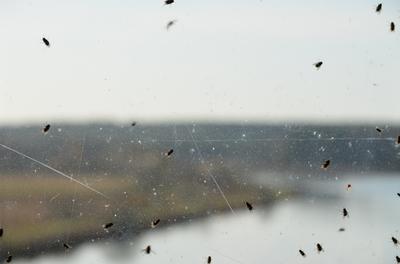 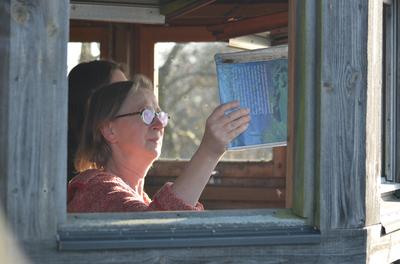 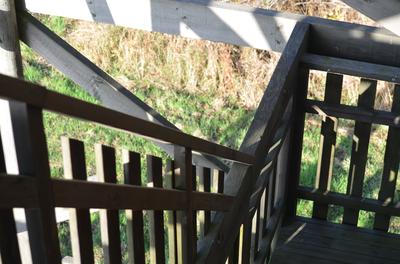 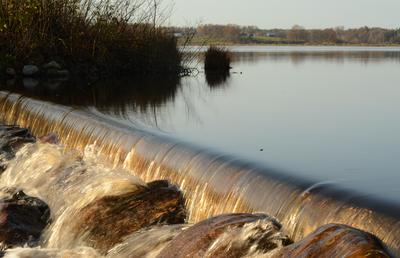 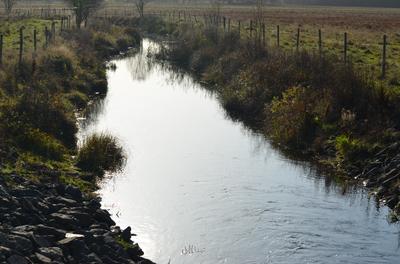 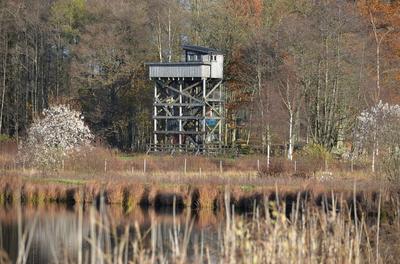 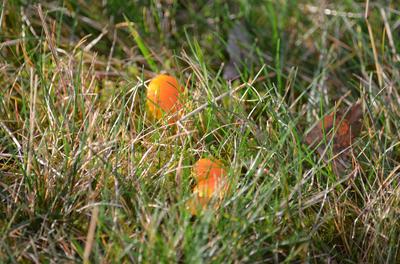 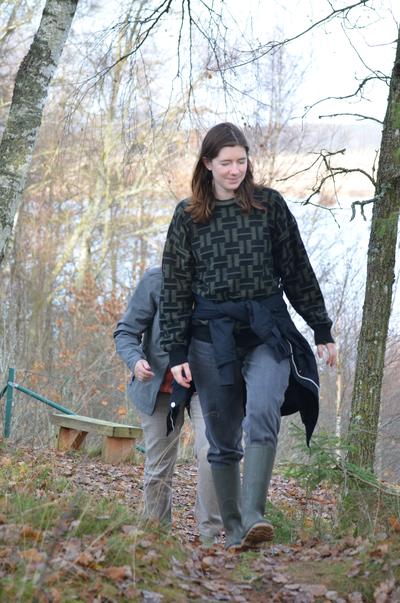 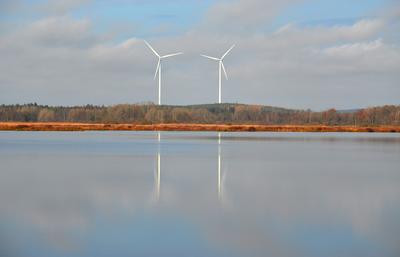 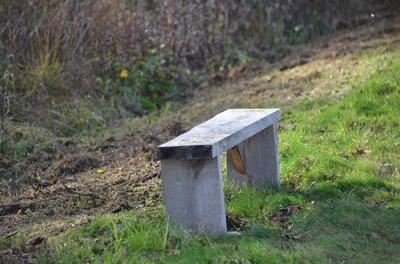