This week we did not do so much in the houses. I went to a folk music course in Austerlitz. 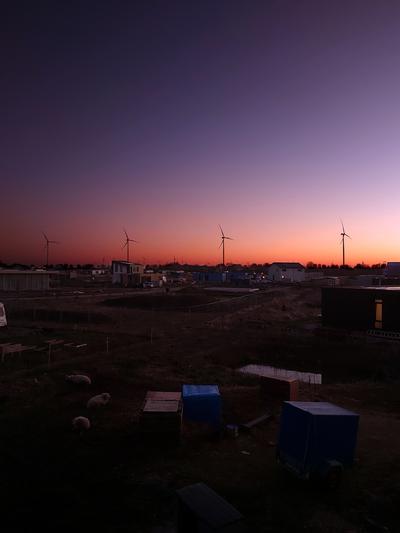 Today we worked from our new house. It was the last day I had full-time work from home, kind of. Well, some say Covid-19 is now entirely over. I doubt it. It would be so fine if it was really over. Tomorrow I will go to work, and if things stay fine, we will return to some form of new normal. At the end of this week, I will attend a Swedish folk music course that I have been looking forward to for a really long time. It is not convenient to catch Covid this week in any case. In general, I am not interested in having Covid at all, but I can say that I have not been in a "home prison" for two years just to catch Covid when people start saying it is over.

We had a relaxing evening at the new house.

According to the new regime, I go to the office on Tuesdays and Wednesday mornings. I had decided to figure out how it is to go by bus. At the old house, we got a bus every 7 minutes or so. Here it is once per half hour but not on the weekend. It is always possible to go by bike and car as well. There are plenty of options.

As I had predicted, I was less efficient at the office. I small talked to people and caught up on what happened to everyone. I suppose this is also important and part of my role at work. It was the first time I recognized the small talk as a "task" in itself. It had always been something on the side, but now I took it more seriously. People were happy to see me in the office. On some occasions, I thought it was too jolly to be true.

One of the more surprising things personally was that the coffee at the office was not delicious anymore. I used to like it, now it was different. The coffee was the same, but my taste buds were different. We are trying to use fewer dairy products at home, so we replaced milk with oat milk in coffee. Perhaps it is possible to get oat milk in the office as well. We also tried almond milk for coffee, but this was disgusting.

After work, I took the same bus to our new home again. We did not do any DIY this evening.

Half-day at the office, and I took the bus for the second time. Today there were other people on both the bus and at the office.

Work from our new home, for the rest nothing new here. I got an email from the people organizing the music course. This afternoon, the lecturer contacted them; he had just caught Covid-19. The email then said they would try to get us another lecturer, and if that failed, they would let us know about that. If we hear nothing, all is fine, and we will have an excellent music weekend. 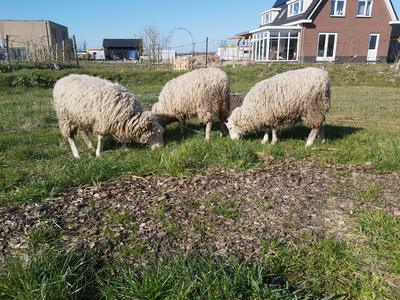 Today I had a day off. DW worked from home. I had reserved this day for all sorts of small things to tidy up and fix. The sheep got a new little fresh patch to graze on. We are still half in winter mode, but the places near the hey rack can be grazed already.

I started by ordering and cleaning the workshop. Then I went to the recycling center with garbage and to the second-hand shop to deliver our first microwave oven.

DW and I went out for lunch together, with just the two of us. That was nice! The purpose of this visit was to check out the place if it was any good. Tomorrow DWs friends will come and walk to this same place to eat. Had the place been horrible, then they would go to another place.

In the afternoon, I started packing for a weekend music course in Swedish folks music. At the same time, we had a visitor. It was challenging to get things packed and pay attention to the visitor simultaneously.

I went to the music course a little late, and when I drove there I missed one junction, so I made a detour. It felt like I drove a detour around Germany, but it was just my feelings. I came late, but not too late.

There was supper. I sat next to a lady who spoke with an excellent Swedish accent during the meal. It turned out to be the lecturer Karin Wallin. Then I knew we had a lecturer! The original lecturer had caught Corona, and then the organizers asked Karin, and she got a ticket and flew in with terse notice.

Michelle and Marieke have organized this course since the year 2000. That is 22 years! In that time, there have been many very talented lecturers holding a music course here.

After the supper, the course started. We sat in a ring with the lecturer. She had her violin with A bass tuning. Usually, a violin got the strings tuned to G3, D4, A4, E5. With the A bass, the G3 string is tuned to A3. The advantage of this tuning is that it gives more opportunities to play double strings in some standard scales. I like to play more double strings, so I wanted to try this tuning.

She taught us three tunes this evening. We were taught those tunes until 10 PM, and then the official course was over.

#1 was Polska after Johan Jacob Bruun. 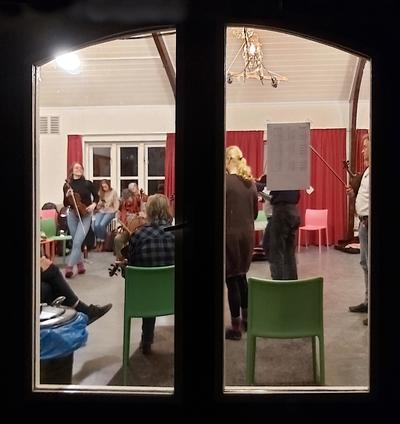 When the official course was over for this evening, the people attending the course started playing all sorts of tunes. There were snacks, and two people were dancing. It was nice. 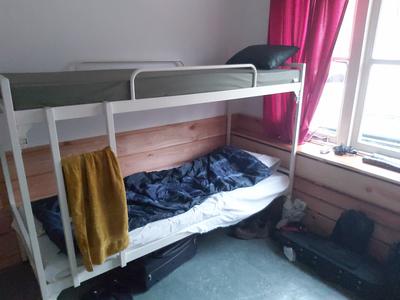 I went to bed relatively late, or should I say early. At first, I did not have the window open and feared I would wake up with a shortage of oxygen. So then I opened a window, just a little. Obviously, I had to go to the toilet after a while. Then I started to get it a little cold, so the window had to be closed just a little more. I felt like an eternity before I could actually sleep. 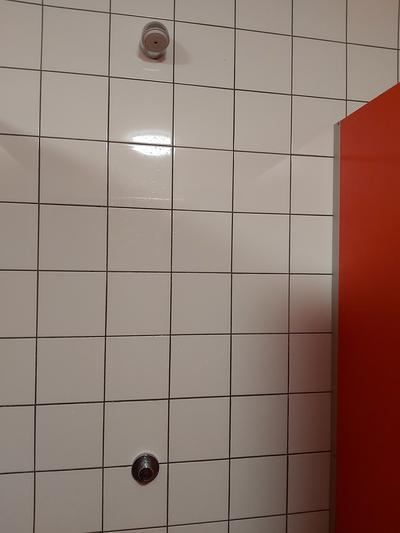 I woke up early and concluded the mattress was on the stiff side.

Since I was early, I could shower well before everybody else. It was a cold shower. The water in the shower was initially ice cold, but a reasonable amount of warm water came after a while. When I decided to wash my hair, the warm water started to fade away again, so I quickly aborted that mission.

After the shower, I blogged a little, and while doing that, three ladies came and held a wake-up concert outside my door. 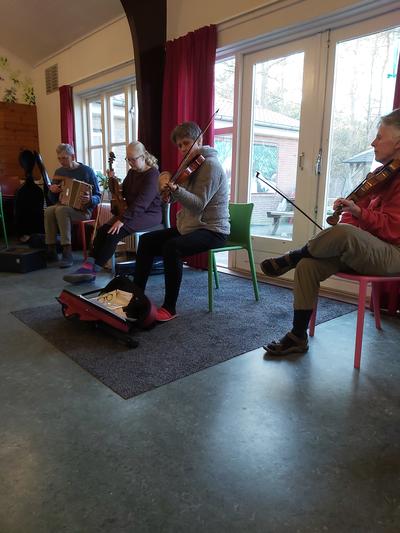 After breakfast, we continued learning more tunes. My fingers were still following my orders, so that was nice.

These were the tunes we were taught on Saturday:

This music session went on until we had lunch. After lunch, we went on a walk. I had not anticipated it was going to be a long walk. This was 6 or 7 kilometers, for me, a long walk, but for the Dutch walking aficionados, it was a piece of cake. I brought my camera and took some photos during the walk. It was magnificent weather today.

After the walk, I could rest a little, and then the course started again. In this section, we trained on tunes we had already been taught.

The supper was not very high-level cooking, but I had an excellent appetite, so I enjoyed the meal. 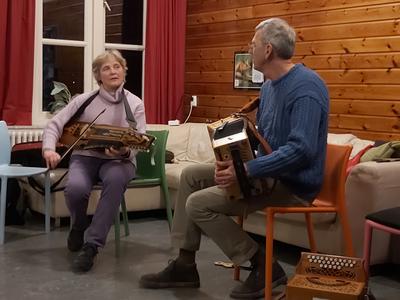 In the evening, groups presented their music, but I had nothing prepared, so I opted out of this session. When all presentations were done, there was time for free form playing, which was interesting. I enjoyed taking part in that.

I slept much better this night. The bed was still a little stiff, but I slept very well after a nice long day playing music and a reasonably long walk.

It was silent in the house when I woke up. I am not blessed with the ability to sleep long into the morning, not even when I go to bed very late. The birds were singing outside in the forest. Some folk music musicians have got inspiration from birds when they compose music. I would not be surprised if Lapp-Nils had some of his tunes after blackbirds. A couple of years ago at our old house, I had a blackbird singing a couple of Lapp-Nils Polska. I always greeted it when I went to work by whistling the end of the tune, and I sure think we had a good music relationship going, but one day it was gone.

This morning I went to the awkward shower again. I got more warm water out of the wall today, but it was just barely enough to call it a shower. The only important thing is that one is fresh when playing music with other people, and I achieved that. It is challenging to put on trousers when standing in a puddle of water. If a high accommodation standard was a requirement, I could have stayed at a hotel in the neighborhood. 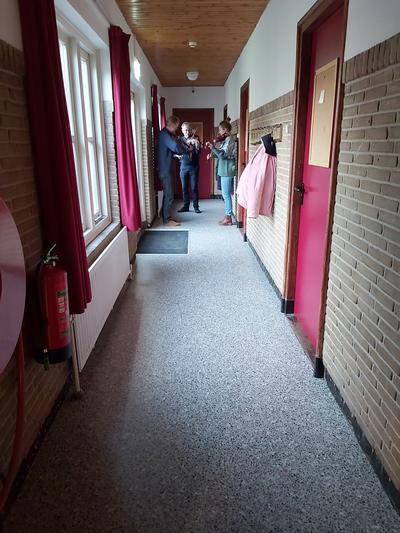 This morning there was a new team holding a morning concert.

Today we learned another batch of new music from Karin Wallin:

#8 Slängpolska after John Enninger. ("Take the time to use the entire bow")

Then it was time for lunch, and we repeated all tunes after lunch.

Perhaps you recall reading my blog post about my Folk music playlist 1, and there I was talking about the Springlek. I said it was a free form of dance. Karin told about how Springdans and Springlek are synonyms of the same sort of dance, and it is in its basic form a Polska usually played at a fast pace. The dance is indeed more free form than other Polska. It is used to show acrobatic features during the dance; the steps are still in the pace of the Polska but decorated with cartwheel moves and even pushups.

While I was enjoying playing music DW started plastering the hobby room. Wow.

With that, the music weekend came to an end. It was such a great time to get there after many years.

We had an evaluation session at the end of the course. I forgot to mention I would like to have more Red Bush tea to select from. Either that or I buy a big box of Red Bush tea and bring it with me and donate it to the organizers. That is also an option. It was a fabulous weekend, really, not so much to nitpick on. One of the attendees got a little emotional when she talked about how she had been alone during the pandemic and had fewer opportunities to play music with other people. I also got emotional with this story.

This concludes this week's activities. We did not do much DYI this week. The bow cannot be on full tension all the time, as it is said among folk music musicians in Sweden. 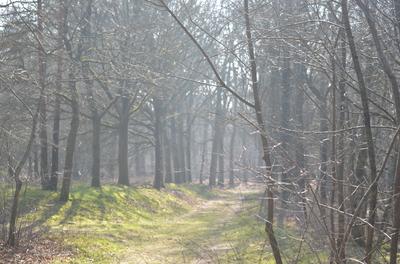 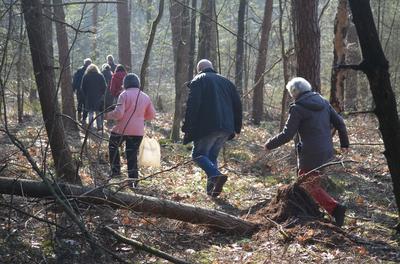 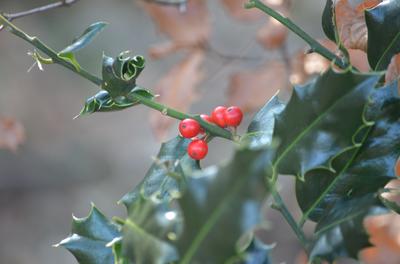 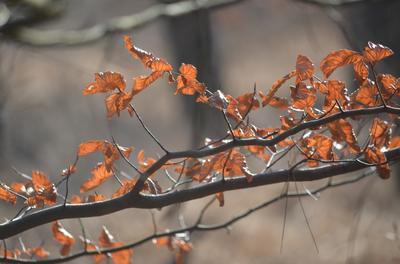 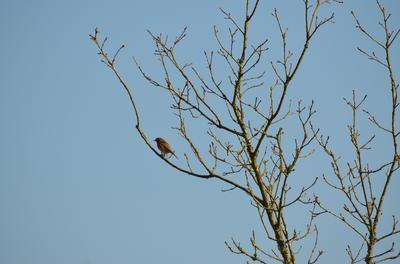 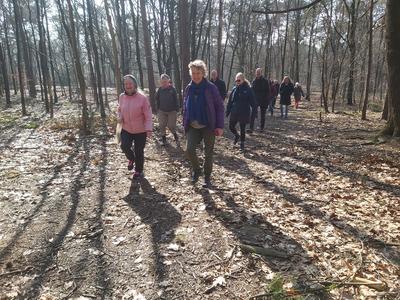