The floortiles were defective and has to be returned. Woodstove installed again!

This last week of the year did not turn out as I had thought. On Monday, we did not do much in the house.

On Tuesday, we would get our floor glued on the first floor. The people arrived, looked at the delivered PVC, and concluded that all packages were defective. Then they left. It was over in less than an hour. We will get a replacement delivered after the holidays, beginning next year.

The woodstove specialist came and had a look at our chimney. He concluded we got a leak. He will find a moment to get up on the roof and fix this. We could also borrow a hand truck from the specialist to bring in our woodstove from the sea container. It has an extra handle so that two people can carry the weight. 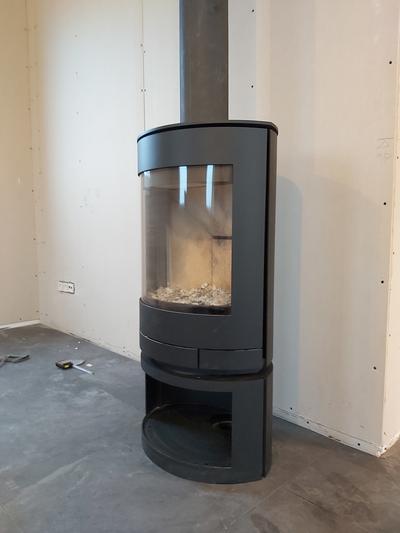 On Wednesday afternoon, we bought more tape to layout more protective paper. My wife started preparing to paint the bedroom.

Our son and I took in the woodstove that we had stored in the sea container. We had had it there since 29 October, when we prepared to get the floors cleared to install floor heating.

With the woodstove in place, we returned to the woodstove specialist to return his hand truck. There we bought a fan driven by the heat of the woodstove. It is not written on the package of the fan if it is using the Peltier effect or the Seebeck effect. It can be either.

We also got a ventilation pipe from the specialist. It should be installed from the inlet of fresh air to the burning compartment. That way, the woodstove always has fresh air. 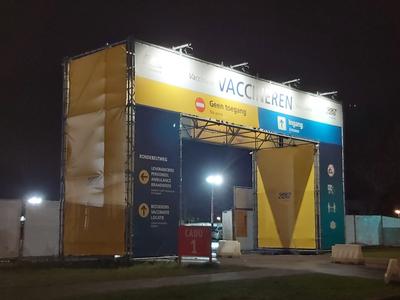 Thursday, we did not do much in the house. I worked from our old house. In the evening, 22:00, I got my booster jab. The day after, my wife got her booster.

There was another thing that happened today that might have a significant impact on our life. Our son might get his own apartment. It is unclear if it will go through, but he is optimistic. It is a process that started today. It might mean that he will not live with us in the new house but get his own place. We more or less had accepted that he would live with us forever, but that might not be the case.

On Friday, the last day of the year, we had regular work as always, but we could leave early. You would think we chilled and had a great time, but not exactly. We attended a meeting of the road association. Fourteen members had requested a meeting, so we sat there on the early NewYears eve to attend the meeting as decent members. Only seven of the fourteen showed up in the meeting. The rest walked their dogs and chilled with friends. The meeting did not reach quorum, so no decisions could be made. It is not so that I make up that they walked their dogs and chilled with friends. I could see them from our living room. Oh well.

There was no end-of-year celebration with two barrels of burning garbage at our old house this time. Last year it started early and went on until the morning hours. The charcoal decorated the street for a really long time. On 7 June, the garbage was finally removed. The people that had put it there had no intention of cleaning it up themselves. I am a little curious why there was no celebration this year. Have they finally figured out that Covid-19 is a dangerous disease?

This year there was a fight in the neighborhood on the morning of the New Year. I could not see it directly; it was on the next street; I could hear it, though. It started around 3 in the morning and went on until 6. Interestingly I could only hear people scream at each other; no physical violence was involved. Well, I could not see them, so perhaps I am wrong. It is about time that we move away from this neighborhood. 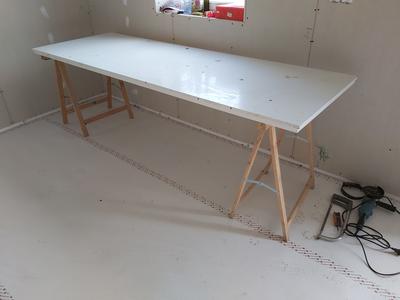 Today we went to the new house. It was lovely weather today. The plan was simple: My wife would continue painting preparations of the bedroom. I would bring the tool table to the workshop and all the tools.

The table is a door that we bought at a second-hand shop placed on two trestles. I started bringing in the tools from the sea container, walking back and forth, back and forth. 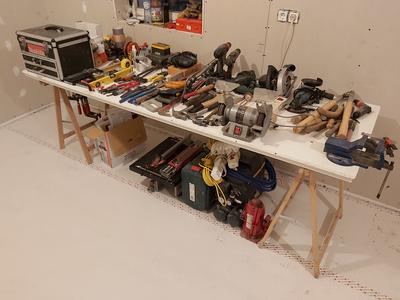 In the afternoon, the tools were in place. That was great.

In the evening, I installed the air inlet of the woodstove. Now it is finished and ready to be used. We will light a fire with the current heat in the house, but it is theoretically possible.

We noticed that our son could get the booster jab in the afternoon. They are running the booster campaign from old to young, and today they came to 1993. He got an appointment in two weeks. 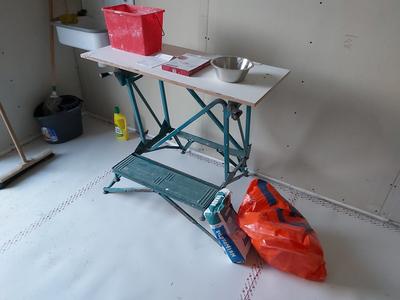 My wife continued painting preparations in the bedroom, and I started putting gypsum plates in the staircase. The idea is that we manage to finish these two tasks before the floor gluing people are back. Then they can glue the floor to the edge of the staircase as long as we intend the floor to reach. Right now, that is just air.

The staircase still has wood from loadbearing beams visible. They will need to be covered by gypsum to make them fireproof. It is challenging because there are different levels, especially the layers on top of the loadbearing beams that don't line up with the beams. We decided to even out these differences with gypsum plaster.

Before mixing the plaster, we went to pick up more primer. Currently, we got a lockdown due to the Covid-19 pandemic, so shopping is done with the click-and-collect system. You log into the shop's website, order what you need, and then go to the shop and pick it up. This went flawlessly. We got a new fresh bucket of primer, and it was almost easier than going to the shop the old way. 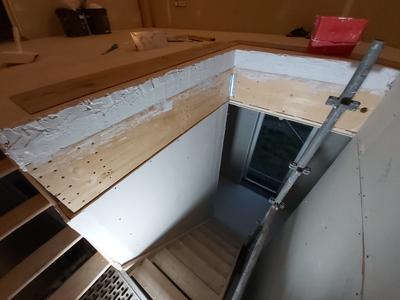 When we came back from the click-and-collect, it was time to plaster. It would be the first time I mixed plaster in more than 15 years. It was not that difficult. My wife was mixing the plaster until now; I was busy with other projects. Now I was standing at the plaster bucket mixing my own mud.

This plaster needs to get dry; perhaps it will be dry tomorrow evening. Then comes the next challenge, which is fastening gypsum into the anhydrite floor without damaging any floor heating pipes. 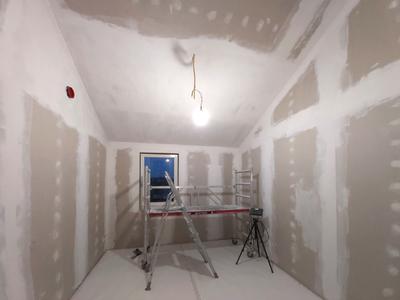 My wife worked with the scaffold we could borrow from the plumber. I have no idea for how long we can borrow this scaffold. My wife was happy about it. It is lighter than our own scaffold. It is a little too low for the highest parts, but on the other hand, it can be used at lower parts of the ceiling that our RIX scaffold cannot be used because the RIX scaffold is too high.

Here ends the last week of the year 2021. Tomorrow starts the first week of 2022. I know it sounds confusing when you are used to that weeks are starting on arbitrary days, but this is Europe, and here we got the ISO 8601 standard saying that a week starts on a Monday.

It is surprising how long time we were busy with the gypsum plates. Memory plays tricks with you if you don't note things.

Now we are ready for a new year. In that year we will move to the new house. Perhaps our son will get his own apartment, which is unclear. 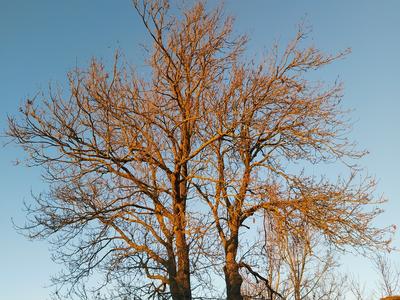 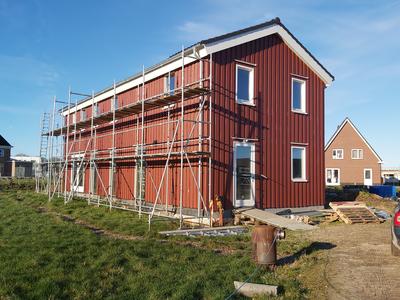 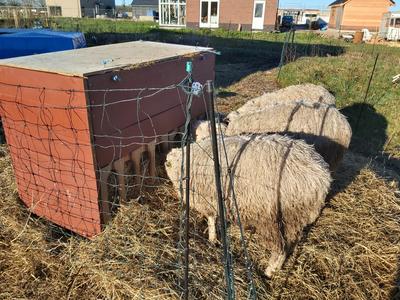 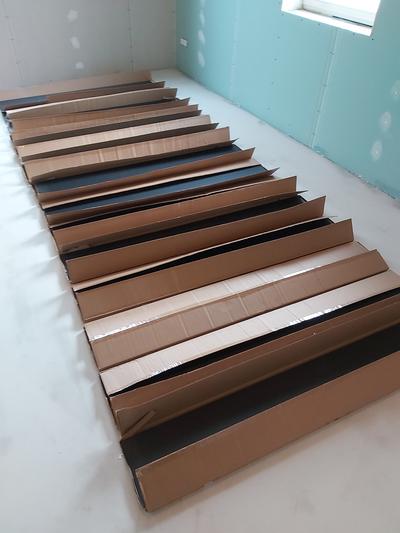 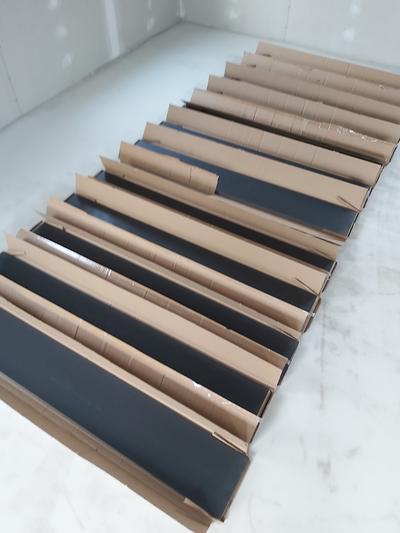 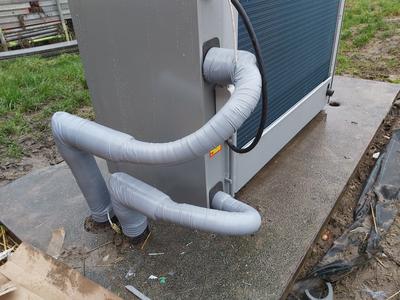 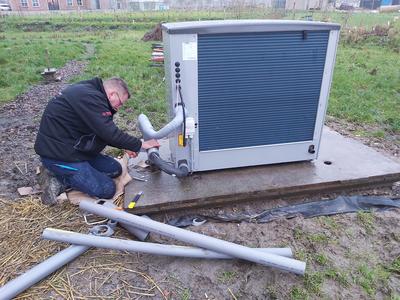 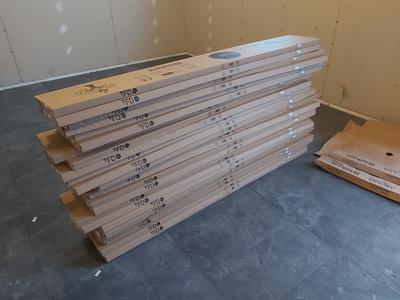 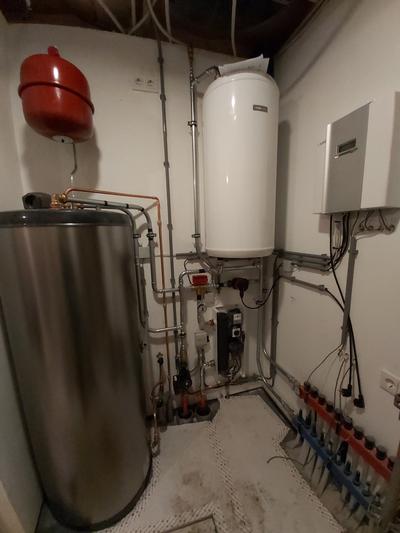 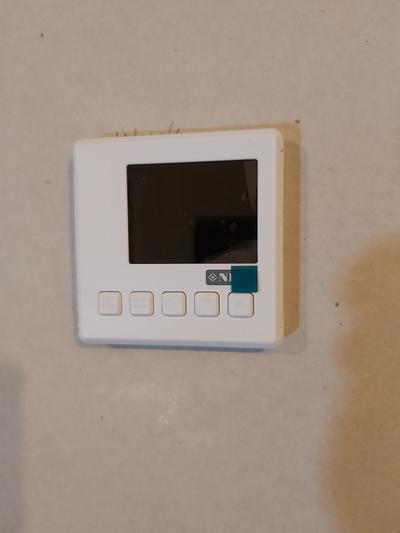 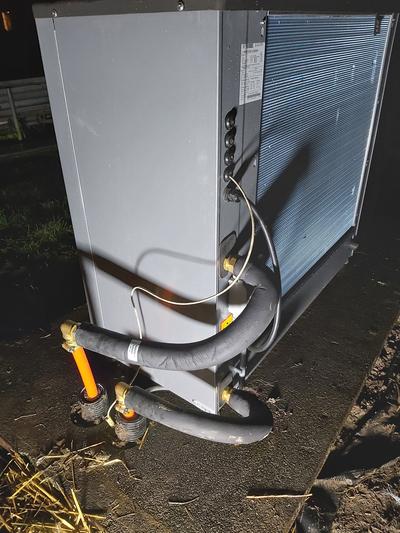 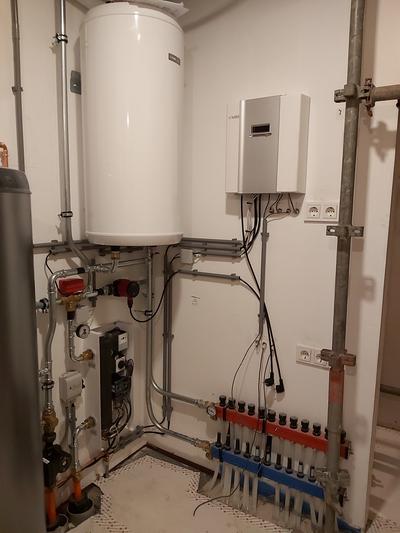 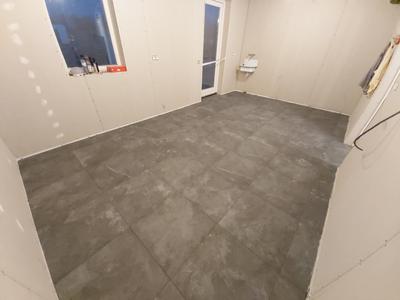 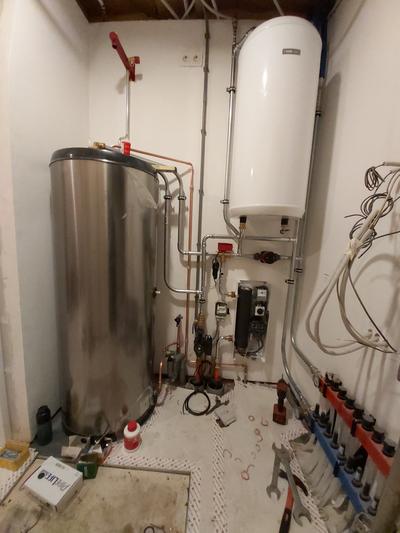