A pouch for Samsung Galaxy S4 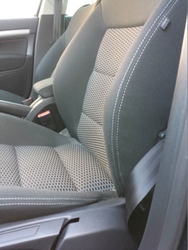 In August 2013 I bought my current telephone, a Samsung Galaxy S4. That was one and a half year ago, a long time ago. But it is still alive! One of the reasons it is still alive that is because I have an Otterbox. The Otterbox removes absolutely all the stylishness of the S4. On the other hand, I climbed in and out of my tractor together with my S4. I cut trees together with my S4 and my motor chainsaw. I biked with the S4 and walked with it in the forest. That clunky rubber and plastic stuff kept my S4 alive.

The Otterbox rubber skin got bigger and bigger so I had to buy a new after the first year, so I am actually on my second Otterbox but I am fine with that.

The Otterbox has a clip system designed in such way that you clip on the clip on your belt and then the phone part clicks into the belt clip. It took 5 hours to break this. I walked to my car, it is a standard Skoda Octavia Station with rather sporty seats with great support side force for the driver. You are essentially sitting in a bucket. The seat of the Octavia matched the Otterbox clip system rather inconveniently. When I descended into the seat the very first time the belt clip and also the entire phone did not follow me into the seat but stayed on the outside of the seat. It got stuck between the bottom cushion and the back cushion, but I did not notice and continued descending into the seat and before I reached the bottom the clip had broken.

So what should I do then? 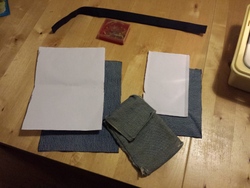 One special thing with the Otterbox design is that the phone can be turned around on the belt clip. By doing this the designers can ship one solution for people who wants the phone horizontally in the belt and also people that wants the phone vertically, they just turn it around. The problematic thing with this design is that no matter what you choose you will always have the phone poking up above the belt because the center point of the phone is the center. Another thing is that the center point of the belt clip makes the Otterbox stick out a bit. It is like having a propeller without a motor connected to the belt. It feels wrong. 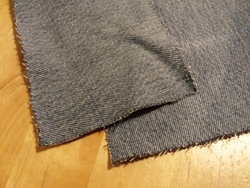 So the design is wrong and even if I decided to order a new Otterbox I would just get a new unbroken belt clip with the same wrong design. 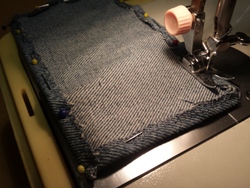 New design, my own design! A pouch. I decided to create the simplest ever denim pouch. So I did this already in 2013 and then I used my pouch since then and now in April 2015 it was really worn out. The pouch is made of one big square of 21.5cm x 15.5cm for the pouch and a square 10cm x 16.2cm for the lid. 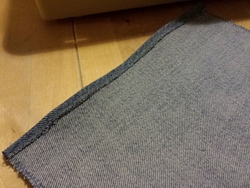 The first thing is to zigzag stich the border of the two squares so that fabric is kept together not losing any threads. In the beginning and end of the stich I sew back and forth with the sewing machine to lock the threads avoiding the sewing thread from unlocking. 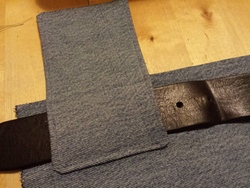 Then I fold half a centimeter of all the sides of the lid, the smaller square, and sew this. By doing this I get a nice folded edge of the lid. It is a bit tricky with the corners. I tried cutting off a bit of the corner so that the corners would fold in nicely. The side of the lid with the fold that is the inside of the lid.

Next I made a nice folded edge on the top of the pouch. That is one of the longer sides of the bigger square. I fold this the same way as the lid and lock it by sewing back and forth on both ends. Also here the inside of the lid has the fold. 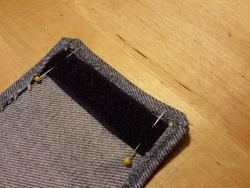 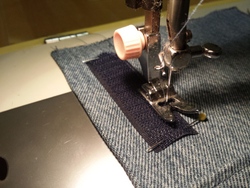 Then I has to decide where the lid will be connected to the pouch. I lay down pouch with the outside up. The back side of the pouch the lid is also holding the belt and the belt has to fit in this canal. I place my belt between the lid and the back outside of the pouch and decides where I should sew two stiches so that the belt canal will be created. Also here I sew back and forth to lock the ends of the threads.

The pouch is finished by folding it so that the two shorter sides are meeting with the outside out and the inside in if you see what I mean? 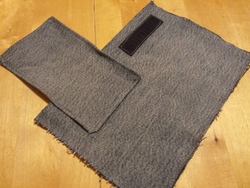 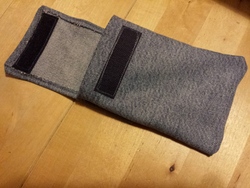 Then it is time to fold the pouch so that the outside is inside. Then we stitch together the side and bottom of the pouch. Then we turn the pouch inside out, actually outside in, whatever – you get it. The pouch is finished! 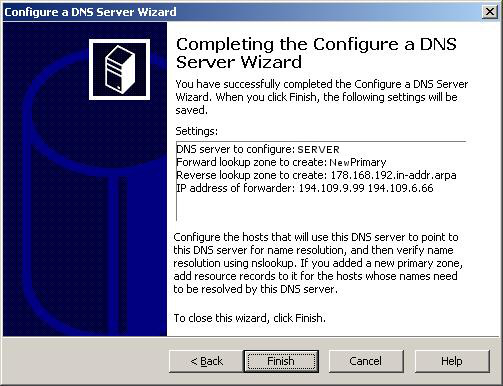 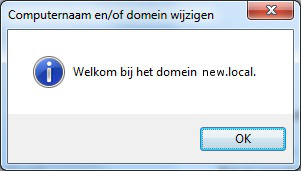 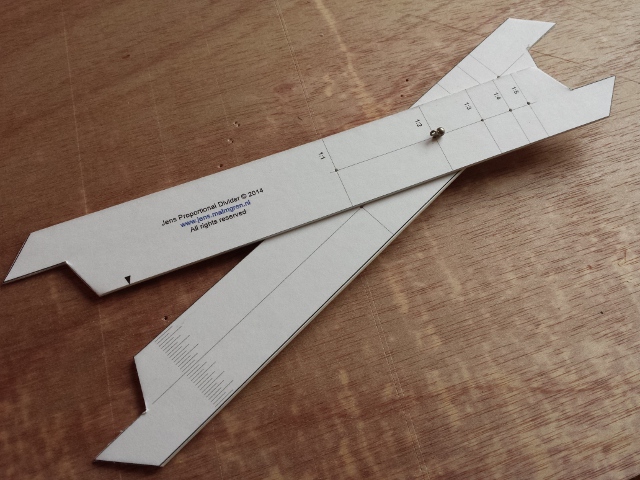