Eleven planks to go, then we are done with planks!

It is already Wednesday! Monday and Tuesday we had regular workdays when we worked for our employers. It is suitable for me to mix paid office workdays with days working at the new house. That way, we can recover from building the new house while earning some money.

We ordered more nails on Monday evening, not just some nails; we use particular types of nails. Stainless steel nails in coils of around 300 nails per coil, bound by two metal wires at a 15 degrees angle, and we use 45 by 2.3 millimeters for the inner layer of planks and for the outer layer 65 by 2.3 millimeters. The head is lens-shaped, and there are rings on the nail for better grip. When we first bought the tacker, we got nails with a yellowish tip. That tip is unspecified, nowhere mentioned in the specifications, but we think it is some kind of “lubricant” that makes the nail easier to penetrate the wood. We could not get these long nails from our local shop because they removed them from their stock due to too many complaints. The local shop did not have the yellowish secret tip. When I fasten the nails, I have to say that knots on the wood give problems. I started to predrill the hole through the knot, which works out well for me. We could only order boxes with 6 coils each. That was the minimum amount.

A weather system that came from the west brought strong wind Monday and Tuesday. Yesterday evening we checked the forecast, and it said it would be strong wind in the afternoon. The wind would come from the northwest in the morning and turn to the west in the afternoon. With the wind from the north, we are okay because we are working on the south wall. On Tuesday evening, we considered skipping the half-day off, but I concluded that we would then both be off at the worst part of the day, so why not use the morning as much as we could.

When we arrived, we skipped our regular checkup on the garden to win some time. Our friend, the lonely male duck, was already present at our pond. He greeted us but was not particularly upset about our presence. 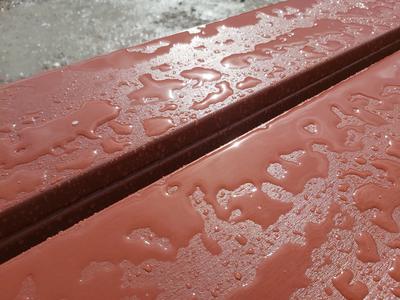 We took out full-length planks from our sea container to be prepared for mounting on the south wall. We examine every plank to see if it is suitable to put up on the wall. If there are long cracks or other damage, we put the planks to the side. When we started with the south wall, we estimated that we required 72 planks, and we had 92 planks in the container. So we are allowed to “scrap” around 20% of the planks in stock. In the first batches, we were over 20%, so that was not nice. The main reason it went better today was that we utilized another selection method. Previously we deemed the plank to be good or bad. This time we switched to three quality levels: 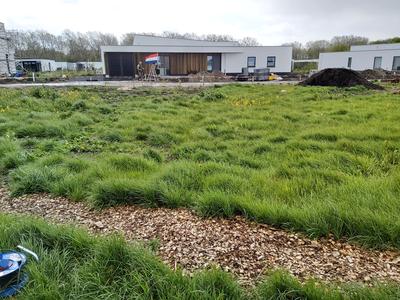 With this method, we managed to pick out planks with less than 20% waste. While we worked on this, we got a couple of showers over us. Luckily the rain was forecasted to come only early in the morning.

After selection, I cut the bottom edge of the plank to 15 degrees sloping out so that water will have a small ridge to drip from. Then I sand the planks. We are not painting the ends of the full-length planks because we think it will be possible to paint the planks when they are hanging.

Yesterday was the day of remembrance of the dead. There were 2 minutes of silence at 8 PM. This celebration is different for the second time due to the Corona pandemic. No big gatherings were arranged. Today was the liberation day, and for this, our neighbors put out the flag. The wind was so strong that the flag was stretched out without any wrinkles from time to time. Luckily the wind came a little bit from the north so we could work out of the wind. It was predicted that the wind would turn around noon to come from the west, but this did not happen. We still had a minor north component in the wind direction, so we were fine all day. 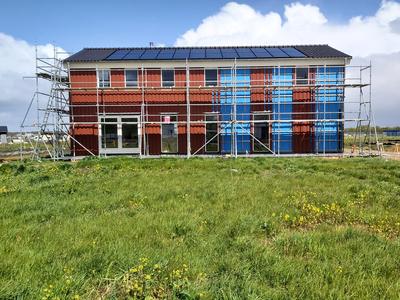 Just before lunch, we finished mounting our first batch of selected planks. It took 13 planks to fill the gap. Today I was relieved from the feeling that we were not working focused. We have done this a couple of times by now and got used to the methods. 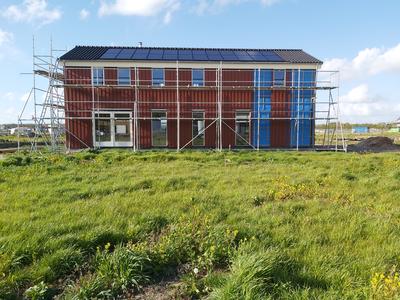 While we worked on the planks, various neighbors greeted us and said that it looked nice, and they were happy for us that we soon will be finished with the exterior.

The work progressed so well that I took out the scythe and cut a section of the lawn next to the driveway when we had finished. It is one of our places where the grass seeds failed to sprout. We think they got frostbite. With no grass, thistles and rapeseed plants take over. When cutting that, you give the grass more chances to recover. 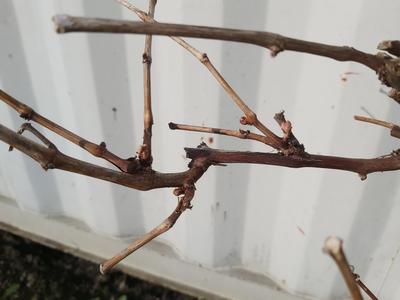 I inspected the grapevine plant that I moved on 29 March from our old house to the new house. I placed it in front of the white sea container. I hope it will get warm there for the grapevine. Last year I planted tomatoes here. That project ended when some fungi took over the tomatoes and killed them in a matter of days. New branches are coming from the grapevine. It will survive the move.

I am less convinced that our Santolina bushes will survive. They moved at the same time. 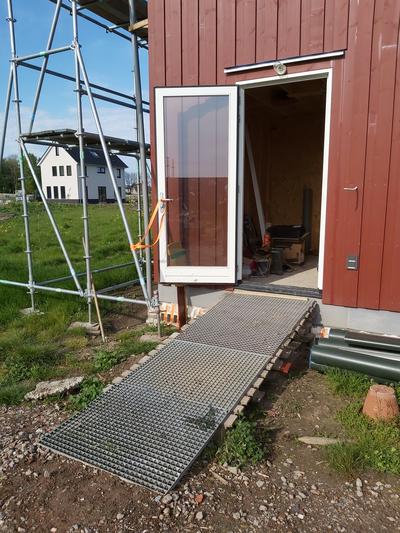 It is already Saturday. Today we got visitors, my parents in law came to see our new house. To make the entry into the house more accessible, we rearranged the ramp in front of the workshop door. That was more or less the practical result of today.

It rained a lot today, and our visitors came and had a look at the house. It was nice to see them again. They had both their vaccinations, so they are fine. We stayed indoors due to the rain, drank tea, looked at the progress in the house, and chatted about little things.

My mother-in-law brought with her a special gift: 12 boxes of seeds she had harvested herself. 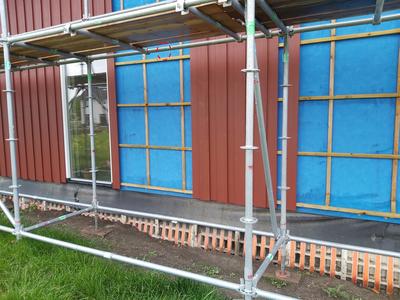 When the visitors had left, we decided to look at the intake for the ventilation system. It will come in the following blue field where we need to put up planks. I marked the place with a red dashed circle in the photo we think the pipe will be.

We discussed the solution with our ventilation specialist, but that was just a rough idea. The exact place on the wall where the pipe will be is different because how will it be done exactly? For this, we had to puzzle together pieces of pipes with various connections.

This means that we have figured out how the pipe will go. We can continue tomorrow with making the hole in the wall and prepare for the pipe. That will be tomorrow. Or?

Today it was going to be warm. I have this idea that now when we figured out the solution of the ventilation pipe, we just go ahead and do it, but my wife disagreed on this. She wanted us to get a confirmation from our ventilation specialist on this solution before working on it. With that, it was essential to establish contact with him. I sent him a detailed description of our solution with photos and explanations. It is Sunday, of course, and he is having a weekend off. You cannot expect him to reply right away. Because of this, we decided to work on the rightmost section of the wall. We did not hear from him until in the evening. 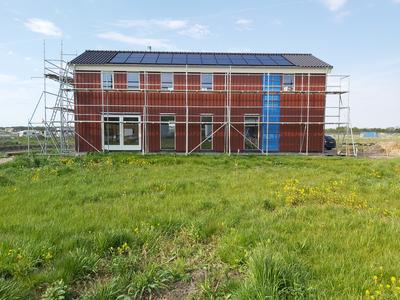 The section we could work on today requires 17 planks. The section on the other side of the window requires 11 planks. That is 28 full-length planks. In the container, we have 32 planks. At this point, we are thus allowed to discard four planks. We took out 17 planks and discarded one. It will be exciting to the very end.

It was lovely weather, we finished the rightmost section. A couple of times came thick drips of water but nothing terrible, really. During the lunch break, it rained for real. 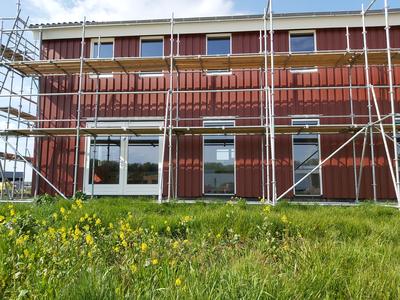 After tea, I decided to take out the scythe and cut rapeseed and thistles, etc., in front of our house. I hope the grass will take over when cutting the weed more often.

The final work of today was to unpack the present of my mother-in-law. She brought 12 boxes of seeds.

Here is a list of the seeds. It is in Latin, English, and Dutch. In the table, I added information about if it is edible and poisonous. We got several boxes of the same sort. There are three boxes with poppy and two with caper surge.

I prepared a garden for these seeds and sowed them from left to right in this order, as seen from the road. Later, when the seeds are sprouting, I will take photos. You sow seeds and plant plants. Good to remember. Before you know it, you say that you plant seeds, and the experts thereby can figure out that Jens is a garden noob.

Each plant’s place got a stick with a name tag to remember where I put what.

We will also spread the seeds here and there. We want them, especially around trees and bushes, because those places will be saved from the future sheep.

When we came to our old home, our ventilation specialist called me, and we discussed the various solutions for the last part of the wall. The conclusion was that I will put up support above and below the location for the ventilation. Then the wall can be finished as usual, and when the planks are mounted, he will drill a hole through the wall.

This concludes this week. Almost done with the planks. It will be nice when the wall is closed. We will then finish a couple of minor details such as window sills etc. 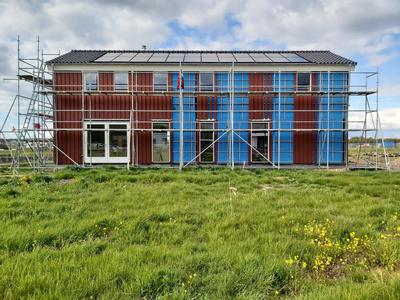 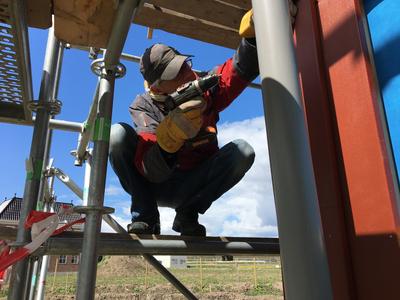 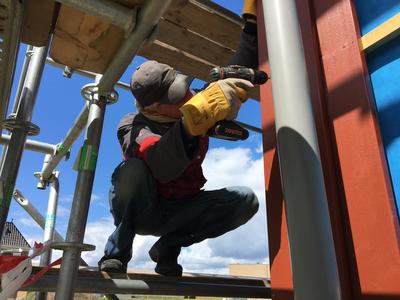 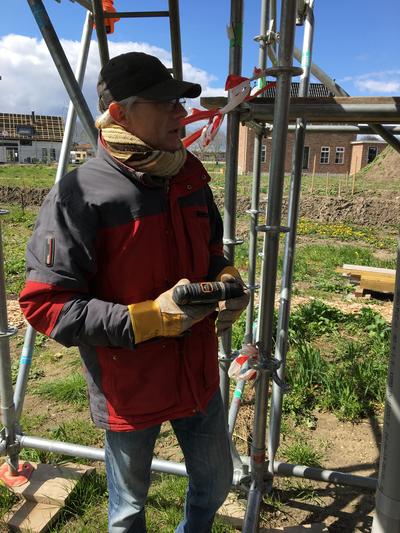 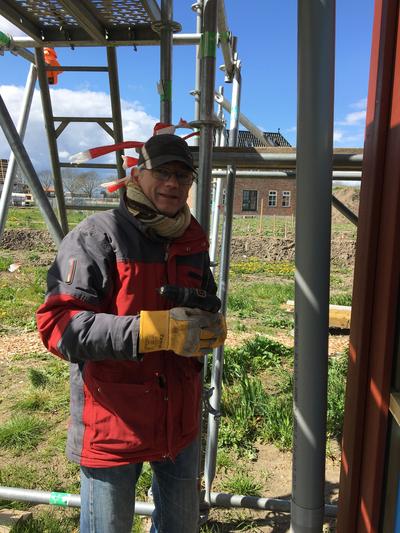 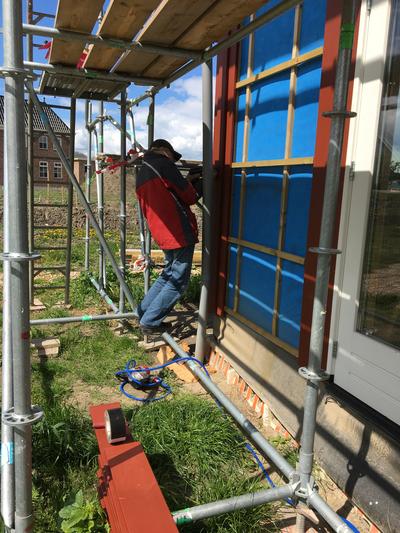 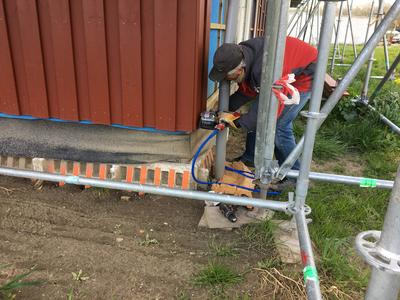 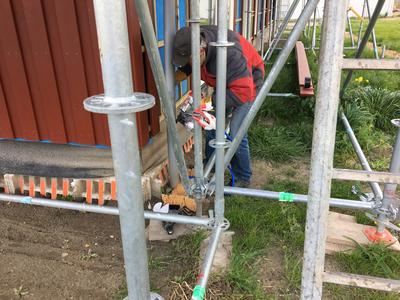 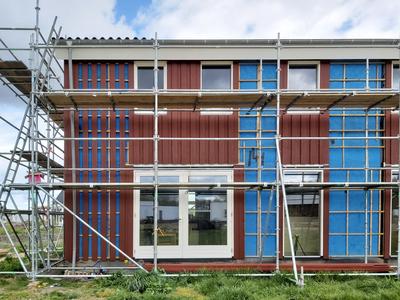 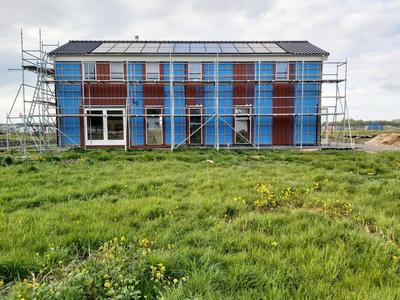 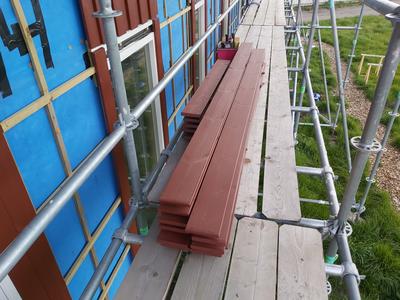 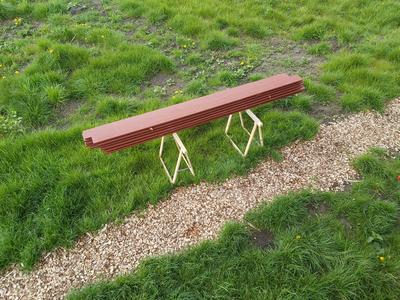 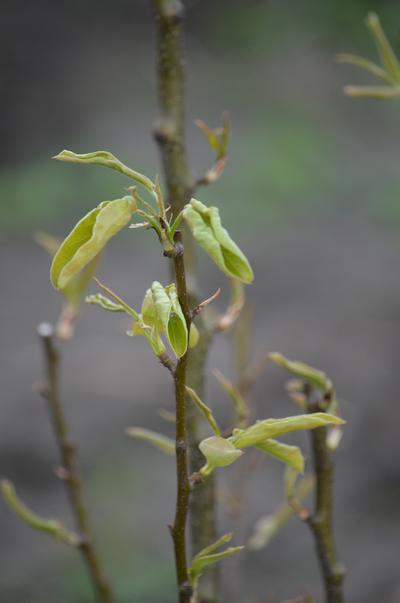 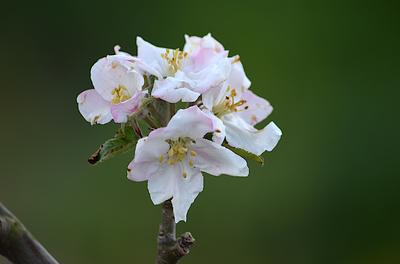 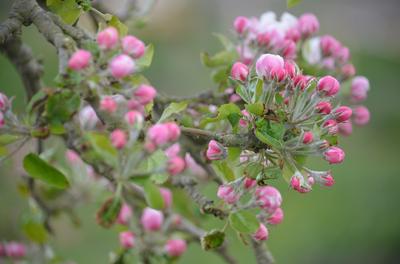