Mounted all fascia boards except the two last

We started this week by painting fascia boards and mounted the nine first levels of horizontal support beams. All fascia boards except the two last boards were mounted. 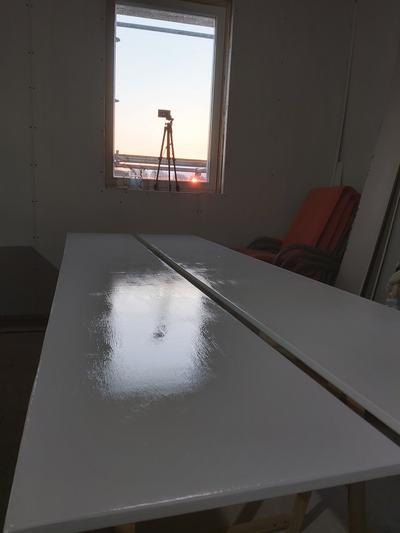 Hi, welcome back to my blog. Here I am writing the never-ending story about how we build our new house.

On Tuesday evening, we went to the new house to paint another layer on the fascia boards. It is much more work to turn raw boards into painted boards than painting boards pre-coated with a perfectly smooth white surface. We decided on these unprepared boards because they were FSC. In the shop, we could buy cheaper and pre-coated boards, but they were not FSC certified. FSC stands for Forest Stewardship Council. The goal of FSC is to promote environmentally appropriate, socially beneficial, and economically viable management of the world’s forests. We like that, and anybody likes that. That is, anybody with functioning ethics.

So this comes with a price, we have to paint a couple of extra layers. So this evening we painted again.

We recently came across information about soy production. Soybeans are fed to animals for meat production and are another of the driving factors behind deforestation. Anyone with functioning ethics can eat less meat now and then.

After painting, we checked the apple trees’ buds, and most of them were still closed. I have the hope they have not got frostbite. That would make me happy. 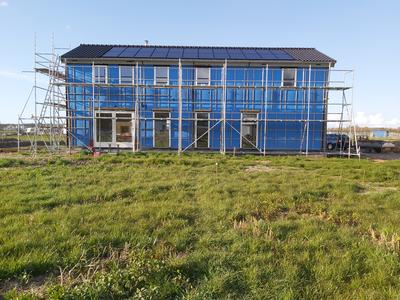 On Wednesday we were back in the new house again! We started the work of the day by painting another layer on the fascia boards.

Then we started putting up horizontal support beams. We started from the bottom and ended halfway through the seventh beam. In the photo, level five and size coincide with the ledgers’ position of the first level of the scaffold, but I can assure you that they are there.

In the afternoon, we painted the final layer of the fascia boards. That means they are now all painted and ready to be mounted. We made one board too long, and we shorten that when we are working on the boards. That may sound cumbersome, but it has the advantage that we can cut the last board based on how the rest are hanging. It means that when we finally know how long the last board is, it is cut to the correct length, and yes, that requires painting. 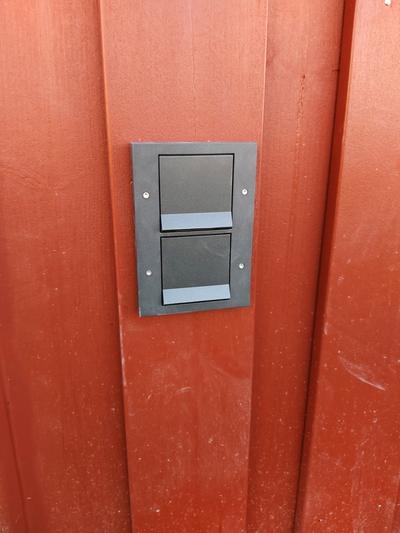 While we were painting, our electrician arrived. He mounted the outdoor socket. Tomorrow he connects it, and that is great! The building business is overheated in The Netherlands, and anyone in the business is overloaded with work. Because of this, and well, it suits us fine, we have given our electrician “leeward.” There is no need to stress him while we are mounting beams on the outside of the building.

On the other hand, at one point, we finished the outside, and then we restart working on the inside. It would be a pity if we then have to wait for our electrician to have stuff finished that he could have done ages ago. It is always a give and takes, but we can talk about these things with him. He had been vaccinated against Covid-19, which is great for him and great for us having him working in our house.

When we arrived today, we noticed that the neighbors on the east side had got their poles driven into the ground. We did our morning tour of the garden, but there were no spectacular changes just yet.

We could not see that the electrician had finished the outlet. Oh well.

Our son came with us today. He gave our trees and bushes water. 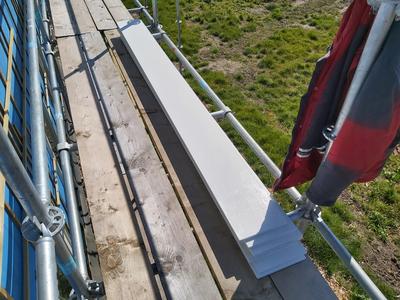 Today we started mounting the fascia boards on the south wall. I carried out the narrower boards for the ceiling. Unfortunately, I had missed noting what side was up and what side was down. The up-side is more even than the backside, so after some inspection, the pile was correct. 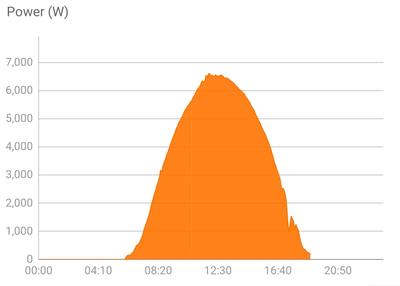 It was a sunny day today. We got an all-time high on our solar panels today. That is not that hard because we are still in the early days of using these panels. Our yield today was 49.4 kWh. I had to take off my jacket because it was too warm to wear. We also received sun on our faces, but not a single moment we were thinking of putting on sunscreen. If there only one piece of advice I can give you, it is to wear sunscreen. Haha, there we have it again (Class of 99 by Baz Luhrmann).

The next issue was that it was tough to screw the panels without getting a backache. I recalled how it was when we mounted the ceiling ventilated beams last time. It took a couple of days before that was healed. My wife suggested we put up the reeling of the scaffold one level so that I could lean on that while screwing the ceiling fascia boards. We tried it, and it worked. I leaned heavily on the reeling, and so, lying almost on my side, I screwed the ceiling fascia boards. I mounted all but the last board. 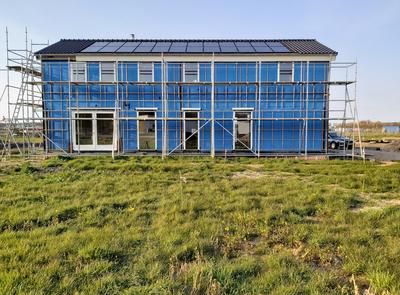 Next up, it was time for the vertical fascia boards. On the north side, we had screwed them into the beam that the gutter was fastened. Here there is a thick rubber mat from the roof extending into the gutter. The screwdriver cannot get in there due to that rubber. We decided to put up another ventilated beam below the gutter and mount the boards on that instead. I had played with the thought of unfolding the rubber, but most probably, it would not be possible to get it back as well as it was initially mounted. The extra ventilated beam was easy to mount. We got “too many” of the ventilated beams, so that is okay as well. We need the ventilated beams for mounting the boards at the bottom of the wall, but we got enough on the stack.

When the fascia boards had been mounted, minus the last board, I cut the last boards to the correct size. My wife painted the beams above the windows white. Later, that matches with the white window sills.

Before the day was over, I finished level seven of the horizontal support beams. The freshly cut last boards had got their new edge covered with sealer. 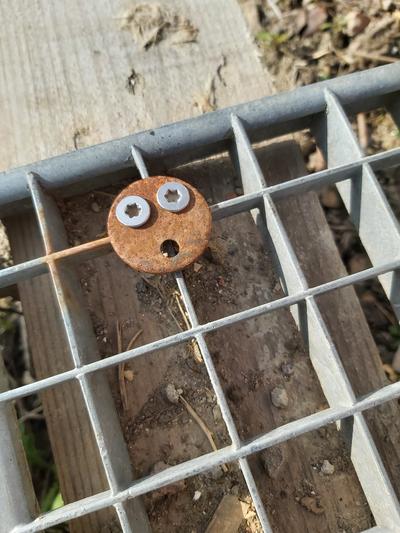 The bracket looks surprised with two wide-open Torx 20 eyes and an open mouth. It holds a grid at our door to the workshop. I had these brackets lying in a box for years. What is the purpose of a bracket with three holes? Here I found a purpose, but the result is that it looks surprising. 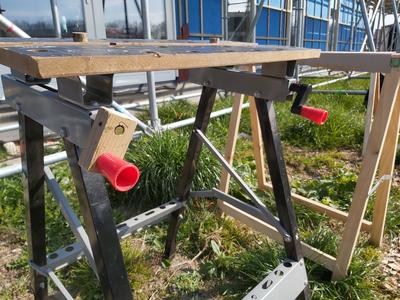 We started working on the new house. My wife painted the newly cut fascia boards, the last boards. She only needs to paint the seam.

I started working on the beams of the south wall. I wore my winter coat, extra thick sweater, regular sweater, t-shirt, and I had a hat and shawl. It was lovely weather. I got warm, and took off the coat, and hoped that it would feel nice. It was still warm. Especially on the south side of the house because the chilly wind came from the north. I took off the shawl as well.

When working with my workmate, I broke the left handle. I had the bench for many years, and it is more than ten years old. I noticed that the handle was fastened with a sprint. That made it possible to remove the handle and replace it with something else. I took a little woodblock, made two holes in it, and put my new handle back on the workmate. It is not so that the repaired workbench has a smaller value for me. It is the other way around; the bench is more valuable now with this new handle. I have added something of me to it. I proved to myself I can repair it. I can see myself in my future workshop making a much more beautiful new handle.

Then I had to take off my extra thick sweater.

The forecast had predicted that the maximum temperature would be 13 degrees Celcius in the afternoon, and I usually don’t take off any jacket at those temperatures. The wind still came from the north, and I was working on the south wall, that was all. It was lovely. At some point, I had a t-shirt. 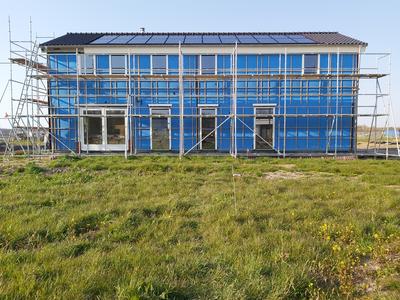 I finished the ninth level of horizontal support beams today. There are two levels left to do. When they are done, we can start putting up red planks. In the end, I was exhausted, however.

It is easier to put a couple of nails slightly into the vertical beams creating a holder for the beam. Then it is possible to put a new beam on top of the nails sticking out. Now when it is in the correct place, it can be nailed. After a couple of nails, the beam cannot fall anymore. Sometimes, especially at the corners, I need to adjust the beam so that one wall lines up perfectly with the next, and it is much easier to do that with the beam resting on nails. Then I can mark where I need to take away a little from the beam, take down the beam to the workmate, and then back up again. There are sometimes many adjustments to get one beam to fit nicely.

Our son came with us today. He finished giving the trees and bushes water. When that was done, he continued harvesting stones from the verge and move them to the driveway.

When doing the last things on the scaffold, I noticed two ducks coming walking towards our house. Until now, they flew into our garden, but this time they came walking.

It was a lovely week. In the first half, we painted a lot. Then we started on the horizontal beams and came far with that. 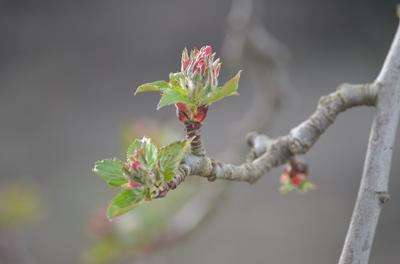 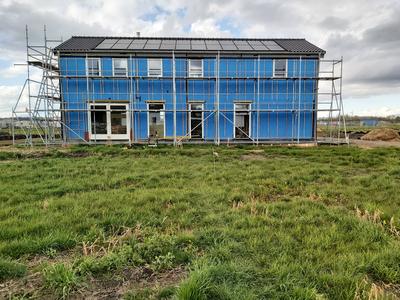 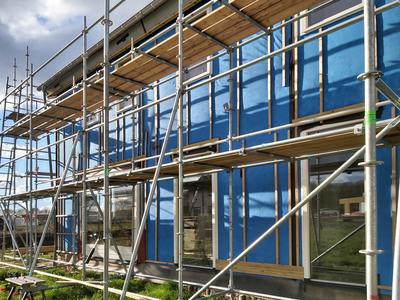 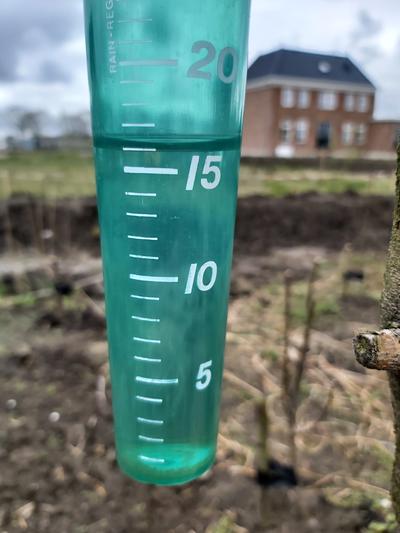 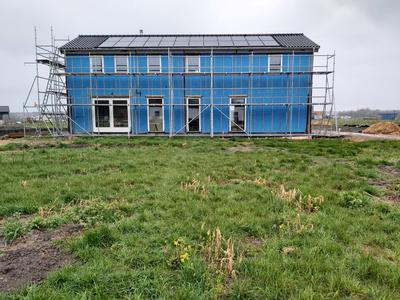 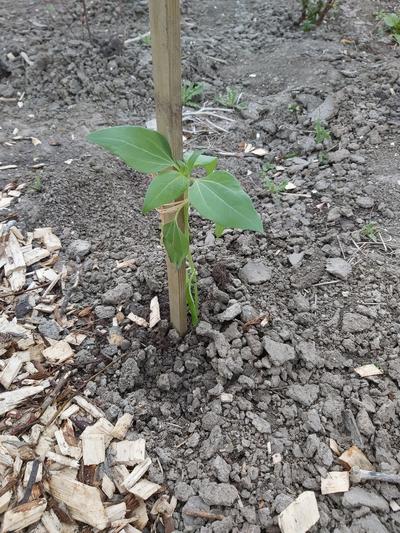 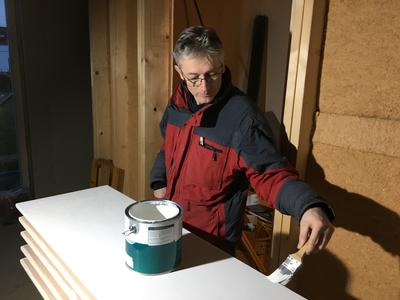 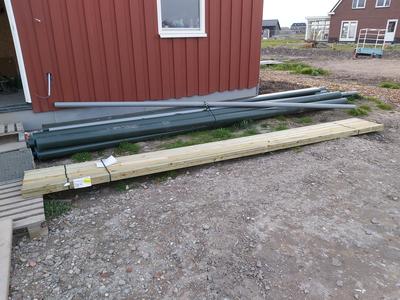 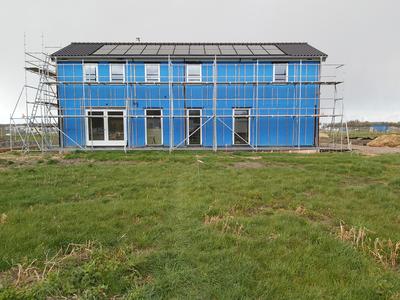 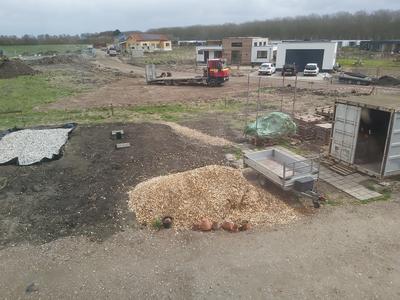 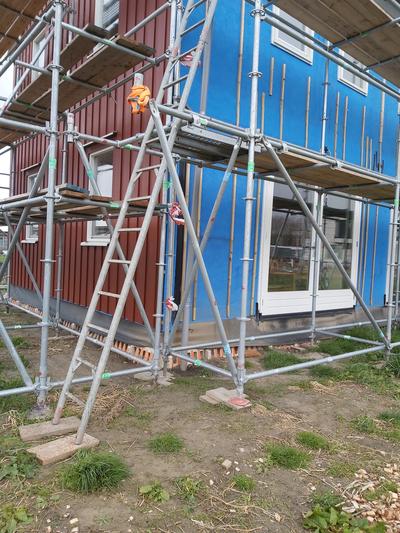 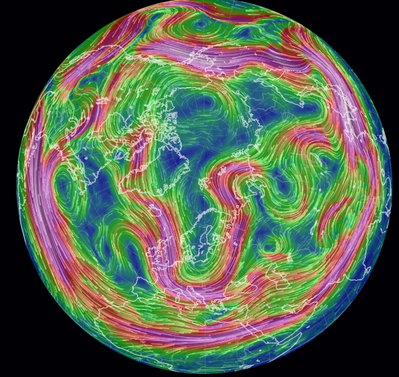 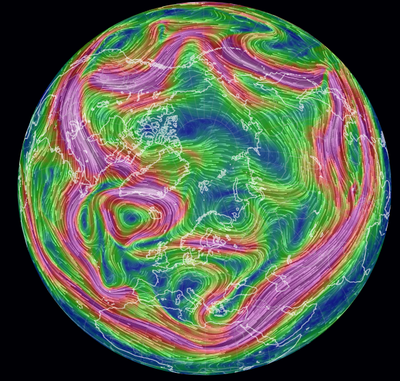 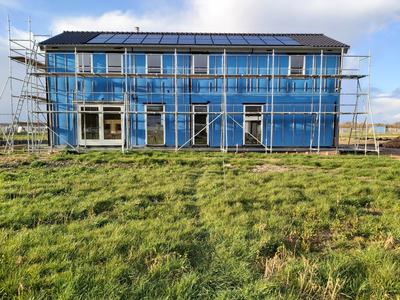 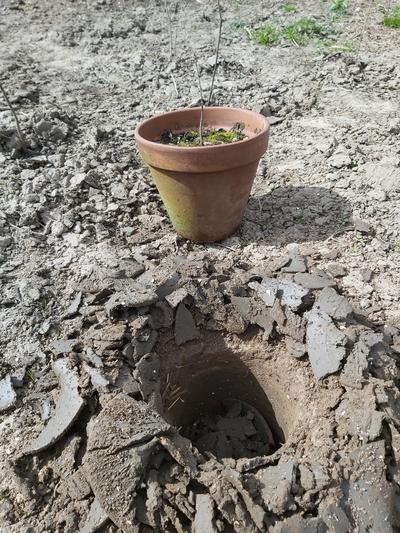